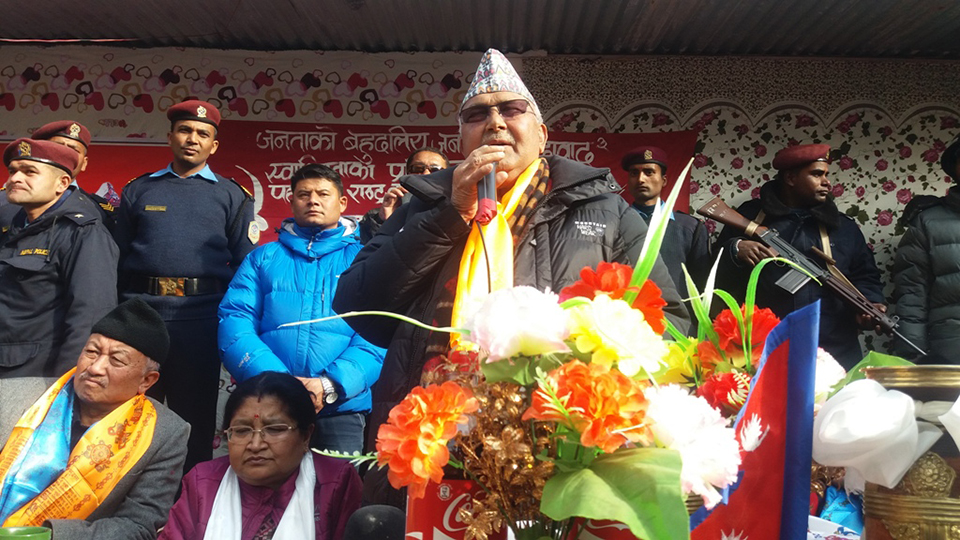 Oli, who has been seen as prime-minister-in-waiting, said this while addressing a gathering during a visit to Rasuwagadi of Rasuwa district, a northern border point around 35 kilometers from Kerung. Kathmandu is around 100km from Rasuwa.

Oli on Thursday left for Rasuwa district with four top leaders of his party in what his aides termed a "refreshment trip" after hectic poll campaigns during the parliamentary and provincial elections. Several senior UML leaders including Ishwar Pokharel, Bishnu Paudel, Subas Nembang and Shankar Pokharel had accompanied Oli during the visit.
“This is an important place and it will link Kathmandu, Pokhara and Lumbini by railways,” he said, adding that the connectivity would also make the pilgrimage to Mansarovar easier. The G-318 highway of China connects Rasuwa with Mansarovar.

Oli had made a cross-border railway link the main agenda of his poll campaign after his plan to inaugurate the railway link during his first tenure as prime minister became unsuccessful in 2016. In 2016, his government was forced to resign after the Maoists pulled their support. Railway connectivity was the major attraction of a 10-point trade and transit agreement signed between Nepal and China during Oli's first term as prime minster in March 2016.

Oli also pledged to complete the construction of the two-lane highway from Galchhi to Rasuwagadhi that his government initiated in 2015. Following the 2015 earthquakes, China has promoted Rasuwagadhi as its major trading point with Nepal. The Chinese side is also planning to resume trade through Khasa-Tatopani border point, which was the major trade point until the border town was devastated by the earthquakes.

Oli and his party colleagues had also inspected the Langtang national park by a chartered flight.  Though UML leaders were planning to spend a night in the Langtang region, they changed their plan and returned to Kathmandu due to pressing political issues.

UML leaders are currently busy drafting the party's long-term and short-term strategies ahead of the planned merger with the CPN (Maoist Center) and government formation. Some UML leaders are also busy in negotiations with NC leaders to end the row over the single transferable voting system.

KATHMANDU, June 24: Prime Minister KP Sharma Oli said that it would take time for the much hyped railway to... Read More...

Three killed in a road accident in Solukhumbu
2 minutes ago