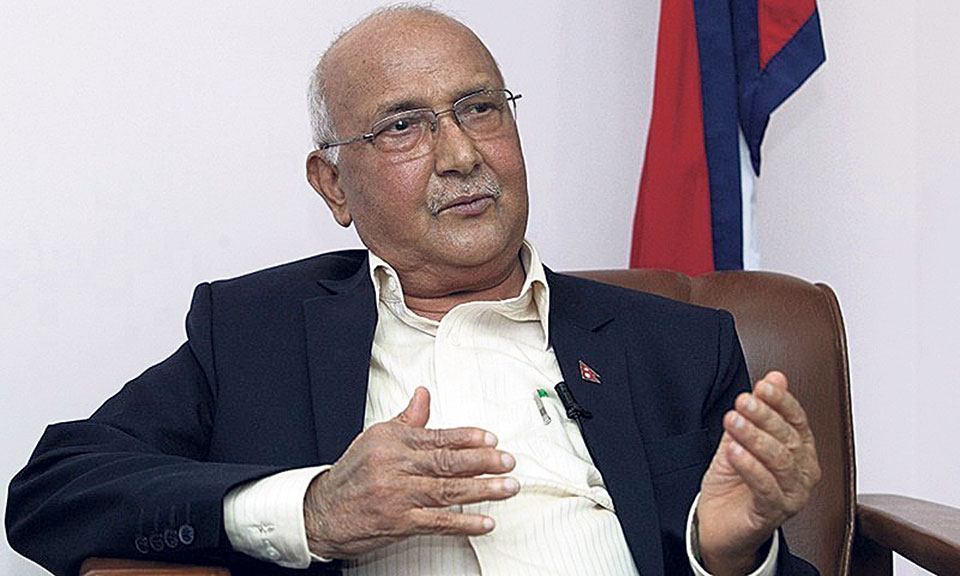 KATHMANDU, March 11: Prime Minister K P Sharma Oli is likely to win a vote of confidence from parliament on Sunday with more than a two-thirds majority.

According to leaders of the ruling CPN-UML, Oli is likely to receive 210 votes in the 275-member lower house. UML leaders  expect to get the votes of left alliance partner CPN (Maoist Center), Rastriya Janata Party Nepal (RJPN), Federal Socialist Forum Nepal (FSFN), Rastriya Janamorcha and independent member Chhakka Bahadur Lama, besides the votes of lawmakers from Oli's own party
Nepali Congress (NC), with 63 members in the lower house, and Baburam Bhattarai, the only member  of his Naya Shakti Party in the house, are likely to remain in the opposition.  Bhattarai will miss the voting  as he is scheduled to land back in Kathmandu from a foreign trip only late evening on Sunday , but his party colleagues  said they have decided to remain in the opposition.

Parliament's meeting is slated to hold the vote of confidence at 3 p.m., Sunday. Resham Chaudhary of RJPN, who is in custody on the charge of involvement in the Tikapur lynchings in 2015, will not be able to vote as he is yet to be sworn in.

Of the total 274 members eligible to vote, 121 lawmakers from CPN-UML, 53 from Maoist Center, 16 each from FSFN and RJPN, one each from Rastriya Janamorcha, Rastriya Prajatantra Party, Nepal Workers  Peasants Party (NWPP) and an independent  are likely to vote for Oli. Among them, only NWPP remained  undecided as of Saturday evening.

According to the constitution, a prime minister must win a vote of confidence from the House of Representatives within a month of appointment to the post. President Bidya Devi Bhandari  appointed UML Chairman Oli as head of the government on February 15.

In addition to the left alliance of UML and Maoist Center, the UML has been working to include FSFN in the government. According to a UML leader involved in negotiations, only the selection of ministries to be headed by  FSFN is yet to be finalized. Raj Kishor Yadav of RJPN said  his party will vote for Oli on Sunday. Of late, Oli has been trying to bring the RJPN also into  his government and negotiations between the two sides are underway.

KATHMANDU Mar 11: Out of  268 present in the session, Prime Minister KP Sharma Oli has secured 208 votes of confidence... Read More...