Oli, Dahal to work together to resolve disputed issues 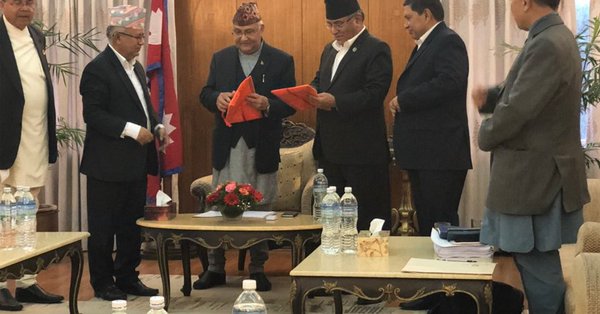 KATHMANDU, April 4: The top leaders of CPN-UML and CPN (Maoist Center) have expressed their renewed commitment to finalize the proposed merger between the two parties within the deadline previously agreed upon. The UML and Maoist Center, which struck a seven-point merger deal on February 19, have announced to become a single party on April 22.  The merger had suddenly become uncertain with Maoist Center's demand for an equal and dignified representation in the unified party.

But a meeting of the top leaders from the two sides on Tuesday agreed to conclude the merger within the deadline. The meeting also agreed to resolve the remaining differences based on consensus and compromise.

Receiving political and ideological documents prepared by two different taskforcees during a meeting on Tuesday, Prime Minister and UML Chairman KP Sharma Oli and Maoist Center Chairman Pushpa Kamal Dahal said that the merger will take place by resolving the remaining differences through consensus and compromise.

Oli and Dahal will work jointly to approve the proposed documents and find a 'middle path' on the disputed issues. The taskforce has resolved over 80 percent issues related to the merger. But some key issues including division of power, election symbol and the Maoists' demand for a formal recognition of the People's War in party statute remain to be finalized.

Maoist Center Spokesperson Pampha Bhusal said that the disputed issues would be resolved after Prime Minister Oli's India visit which is taking place from April 6 to 8.
"The two chairmen would work together to reach consensus on the disputed issues.  They were separately briefed on these issues," said Bhusal.

The biggest difference, leaders said, is over the division of power in the new party. In the recent days, Maoist leaders including Dahal have demanded 50 percent stake in the unified party. Dahal has also claimed that "the People's War" should be mentioned in the statute, a proposal rejected by the UML.

The party, which has been named Communist Party of Nepal, will adhere to Leninist Marxist philosophy and embrace the "21st century brand of socialism suitable in the present context of the country", according to UML leader Baburam Bhusal, who was involved in drafting the statute.

Maoist leaders said that there won't be a compromise on the issue of representation but said that other issues could be finalized through the first general convention of the unified party.

The two sides have also drafted a modality to merge their organizations. The unified party will have eight executive committees. The central committee will act as the party's steering committee with two strong bodies -- the politburo and the standing committee -- under its purview.

The central committee will not have more than 299 members, while the politburo and standing committees will comprise around 99 and 33 members respectively. The number could go up or down depending on the need.

The taskforce has proposed setting up a 150-member provincial committee and a 75- to 125-member district committee, while election area and local level/municipal committees will each comprise 75 members, according to the leaders involved in drafting the documents.

IN PICS: Dahal-Nepal faction of NCP stages mass gathering in capital
18 hours ago