Old faces in the fray in Khotang 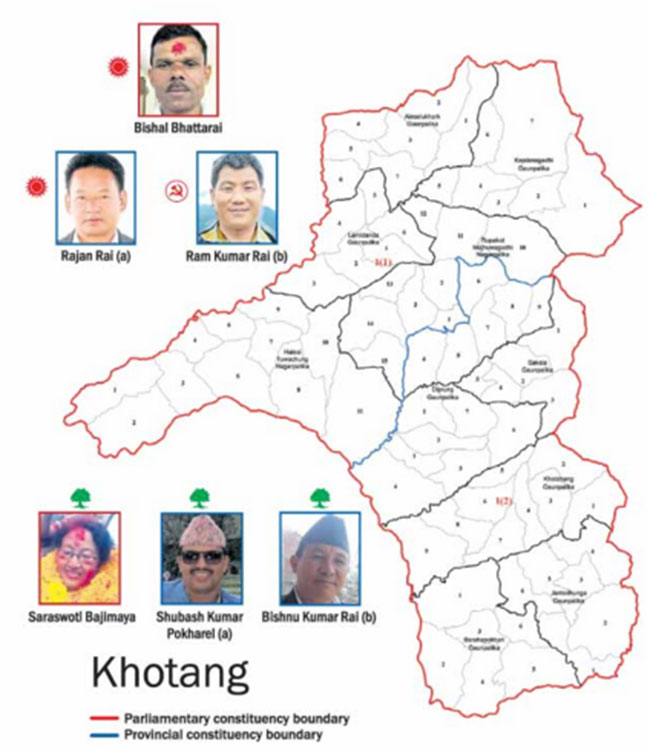 KHOTANG, Nov 19: With the objective of giving a tough fight to their rivals, almost all parties in Khotang have fielded seasoned candidates for the upcoming federal and provincial polls scheduled for November 26. Many of the experienced candidates have taken this as an opportunity to repeat their victories while some have taken it as a chance to avenge past defeats.

Major parties like Nepali Congress (NC), CPN-UML, CPN (Maoist Center) have fielded old faces which had contested in the past elections too. Though fresh faces were also recommended for the nomination, the parties gave priority to old faces while giving tickets.

NC leader Subash Kumar Pokharel who contested the Constituent Assembly (CA) elections of 2008 will be competing for the provincial election in constituency (a) after ten years of wait. Bishnu Kumar Rai, another candidate of NC will be contesting from constituency (b). Rai was also one of the candidates in the CA elections of 2013. Unfortunately, both of them were defeated.

Similarly, Saraswoti Bajimaya, NC's candidate for the parliamentary elections is also a former lawmaker. In the elections of 2013, she was elected as a representative under the proportionate representation (PR) category.

Likewise, Bishal Bhattarai, CPN-UML's candidate for the parliamentary elections was elected in the second CA elections in 2013. Bhattarai, who was defeated by CPN (Maoist Center) candidate Samita Karki in 2008, had avenged his defeat in 2013 by defeating NC's Bishnu Kumar Rai. This time, he is set to repeat his glory all over again.

Dharma Raj Pokharel of Rastriya Prajatantra Party-Prajatantrik (RPP-P) who had contested the elections of 2013 from constituency no.1 hopes to secure a parliamentary seat again. Furthermore, Kul Prasad Sharma Phuyal who had registered his nomination from Nepal Communist Party (NCP) in 2013 is now competing with the Maoist Center for the provincial elections in constituency (b).  Netra Bahadur Katwal, another candidate of Maoist Center will be competing in the provincial elections from constituency (b).

KHOTANG, Oct 27: Most candidates fielded by both major and fringe political parties for the upcoming provincial and parliamentary elections in... Read More...

'Too many old faces may dampen voter zeal'

ILAM, Oct 10: Instead of encouraging newcomers, most of the political parties have once again prioritized old faces in ticket distribution... Read More...

BIRATNAGAR, Oct 8: With the local elections now successfully concluded, the country's attention has shifted towards the parliamentary and provincial elections... Read More...