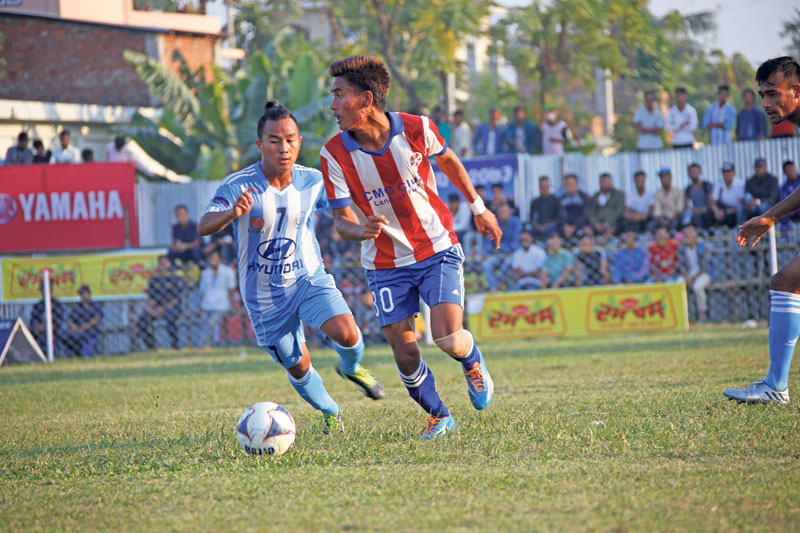 Heman Gurung of Manang Marshyangdi Club (L) vies for the ball with a player of Sankata Club during their match of the Sahara Surunga Gold Cup football tournament in Surunga, Jhapa on Tuesday. (Republica)

The win also avenged MMC's semifinal defeat at the hands of the same opponent during Bikash Running Shield in Chitwan few weeks ago.

Following MMC's win, the semifinal line up of the tournament got full shape. MMC will now take on Rupandehi XI in the second semifinal on Thursday while Armed Police Force face Nepal Police Club in the first semifinal fixture on Wednesday.  The winners of the semifinals will vie for a purse of Rs 351,000 in the title clash on Saturday.

The A Division outfits based in the capital came up with competitive show. MMC studded with Nepali internationals dominated the show but could not make proper finishing and convert chances. MMC featured national captain Biraj Maharjan and other four international players Anil Gurung, Sujal Shrestha, Kiran Chemjong and Heman Gurung in its starting lineup. Despite the presence of star players, the first half ended in goalless draw.

MMC was prized with Olawala's header in the sixth minute after the break. He headed a cross of defender Biraj Maharjan leaving Sankata goalie clueless.

Sankata also created few attractive moves. But it failed to resist the stubborn defending line up of MMC.

Sankata was unlucky in the 73rd minute after substitute Saujan Rana's scorcher crashed on to the woodwork.
Heman Gurung of the winning team was declared the man-of-the-match and received an android phone. Meanwhile, entrepreneur SP Prasai rewarded the goal scorer Olawala with a purse of Rs 2,000.