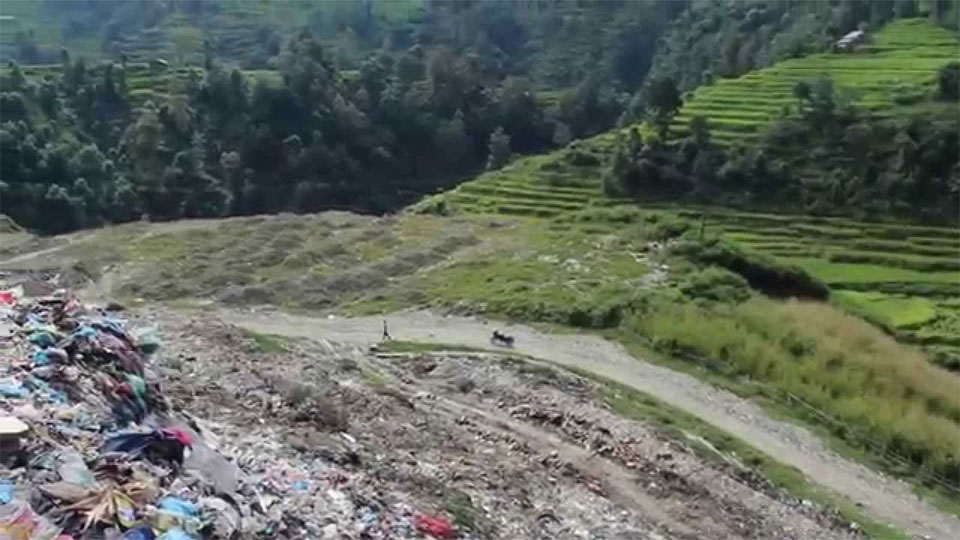 NUWAKOT,  Sept 5: The residents of Okharpauwa in Nuwakot where a dumping site for the management of Kathmandu Valley's waste has been set up have said they are not allowing the garbage disposal for an indefinite period until their demands remain unaddressed.

They decided to halt waste disposal containers from disposing of in protest against the deduction in the compensation amount being given to the affected households.

They in the past 24 hours forced 85 vehicles laden with garbage reached the site for disposal to return from midway, according to Okharpauwa's ward chair Kedar Poudel.

Earlier houses and cowsheds lying in a 900- meter radius from the disposal site were getting monetary compensation of Rs 50 thousands per square meter every year. But the Kathmandu Metropolitan City Office decided to reduce such distance from this current fiscal which is not acceptable for the Okharpauwa folks, he added.

Waste collected from the Kathmandu Valley is being disposed at Sisdole of Okharpauwa in Nuwakot since the past 13 years.

The Okharpauwa folks have also demanded the construction of a 15-bed health facility for the people affected by the waste disposal and infrastructure construction at Bancharedanda proposed by them as an alternative site to Sisdole which lies in 1,900 meters away from it. RSS

KMC cracks down on haphazard disposal of waste

PANCHTHAR, May 24: Inconsistency in power supply has affected daily life of locals of Phidim -- the district headquarters of Panchthar... Read More...