Officials stress need for ending all forms of violence against women 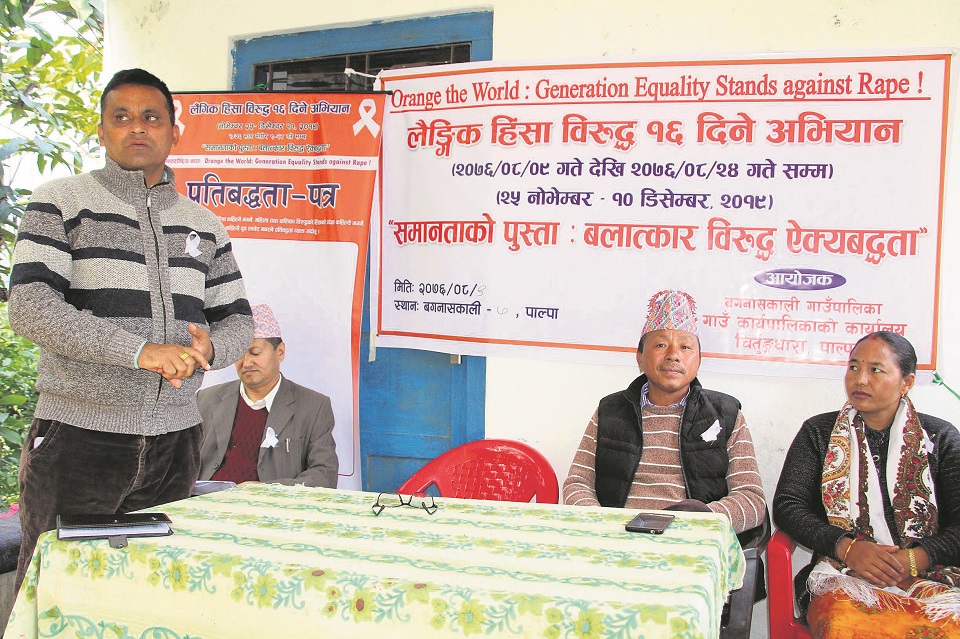 Participants speak at a function organized to raise awareness on violence against women in Baganaskali Rural Municipality, Palpa in this recent picture. Photo: Mukti Neupane/Republica

PALPA, Nov 26: Formal and informal programs of various kinds were held in the district on Monday as part of the 16-day activism against violence against women (VAW) organized worldwide and across the country. The campaign that begins every year from 25 November and ends in 10 December has brought stakeholders together for the cause.

Speaking at several platforms, women and men leaders in the district on Monday said that the relevance of the campaign is getting even more intense with time considering the ever rising cases of domestic violence, violence against women and girls and violence against men.

Rallies were organized by school children, college students and various NGOs in Palpa. Similarly, the local authorities marked the beginning with various programs.

Krishna Prasad Bashyal, chairperson of Baganaskali Rural Municipality, stressed on the need to take effective measures to ensure equal opportunities for all in the society. And for this, both the locals as well as the local government should work hand in hand.

“Until and unless women themselves move ahead to grab opportunities and demand equality, the equal space is hard to come by. On the other hand, local authorities must engage positive discrimination to help women get opportunities,” he said.

“Women cannot move ahead in the battle without proper support of the family and friends and this means, gender equality should be everyone’s concern,” he said. He added that families should focus more on girls’ and women’s education rather than worrying for marrying them with ‘capable groom’.

He further stated that even men are becoming victims of domestic violence these days. Citing examples of the cases of migrant workers who send all their hard-earned money home but return to the country just to see all their savings being misused by wives, Bashyal said that such cases must be handled by the court equally sensitively and justice should prevail.

“Due to foreign employment family disintegration has become very common. Migrant workers have their own stories; the number of men reaching out to the court seeking divorce is on the rise. It is very unfair that they lose all their hard earned money to their partners who care least about them,” he stated.

According to Bashyal, many male victims come to the municipality office seeking help to settle down their domestic issues. “Due to patriarchal set up of the society, women continue to be sidelined or marginalized. They face violence of various kinds. But these days, there are men too, who are suffering. A growing number of men come to the municipality office seeking intervention to settle down their domestic problems,” he said. He added that economic independence is imperative in order to protect everyone’s human rights, choice of freedom and right to a dignified life.

Talking to Republica, Vice Chairperson of the rural municipality Saraswati Chidi stated that women are more vulnerable and so they need a very strong support system if violence against women is to be addressed affectively.

“Because they are more tolerant and soft by nature, they are easily victimized. They do not speak out unless the matter gets really worse. The fault is in the process of socialization where women are told to tolerate violence instead of voicing against it,” she said. She added that it is very important to sensitize both men and women regarding gender equality.

Chidi stressed that housewives should be recognized for the labor they contribute at home. Until and unless this is done, they will continue to be treated lowly. “Women are expected to take all the domestic responsibility. Personality development, career advancement and so on hardly come their way. On the other hand, their labor at home is not recognized. This is unfair,” she said. “Until and unless we value women’s contribution at home and outside, we cannot create a just society,” she added.

Speakers at different platforms on Monday also shed light on ill cultural practices and superstitions that continue to victimize women. For instance, caste discrimination, charges of witchcraft continue to draw headlines, they said. In the district, there are several underprivileged communities, including Kumal community, they said.

Sundar Shrestha, chief administrative officer of the rural municipality stated that there are a number of poor communities in the district and one of those are Kumals. “Their children do not go to school, the men and women are jobless,” he said. “Many of them are landless. They struggle to fulfill even basic needs. In this situation, it is normal for them to not able to respect rights of each other. Domestic violence is very common in poor communities,” he added.

Local bodies in the district have carried out door to door awareness campaigns as part of the 16-day activism. The activism was initiated in 1991 by the first women’s global leadership institute by the center for women’s global leadership at Rutgers University. Since 1991, it is said that over 6000 organizations from approximately from 187 countries have participated in it.

Effective implementation of laws must to end VAW: Lawmakers

KATHMANDU, August 28: Lawmakers have laid emphasis on formulating stringent laws along with their effective enforcement to end all types... Read More...