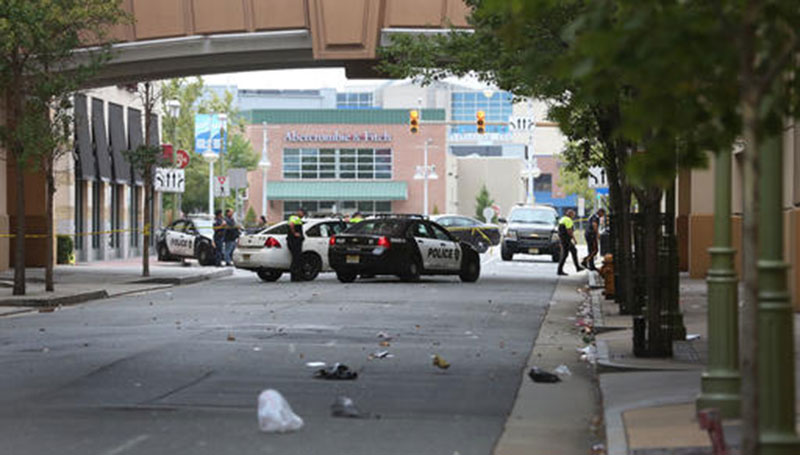 ATLANTIC CITY, Sept 4: A police officer remains critically injured and a suspect is dead after two officers saw a robbery being committed outside an Atlantic City casino garage and exchanged gunfire.

The wounded officer was shot and injured as he exited his vehicle. The second officer returned fire and struck one of the suspects, who was found dead a short distance away.

Police arrested two men Saturday night in connection with the shooting. Martell Chisholm, 19, of Millville, and Demetrius Cross, 28, of Bridgeton, each were being held on two counts of attempted murder, three counts of robbery and weapons offenses, Ruberton said. It was not immediately known if they were represented by lawyers.

The dead suspect was identified as Jerome Damon, 25, of Camden. An autopsy is scheduled for Sunday.

The wounded officer, whose name was not released, was taken to nearby AtlantiCare Regional Medical Center. He underwent surgery Saturday morning and remained in critical condition Sunday.

"These are good examples of what happens when too many of these assault weapons are in the wrong hands," he said.

Authorities had released video late Saturday afternoon showing six men they said were "persons of interest" in the case. They sought the public's help in identifying the men, who in the video are seen walking along a sidewalk in two separate groups of three people.

The New Jersey State Policemen's Benevolent Association offered a $20,000 reward for information on the suspects.

"We ask for prayers for the officer, his family and the Atlantic City Police Department," said Patrick Colligan, the association's president.

QUEBEC CITY, Jan 30: Five people have been killed in a shooting at a Quebec City mosque, the president of the... Read More...