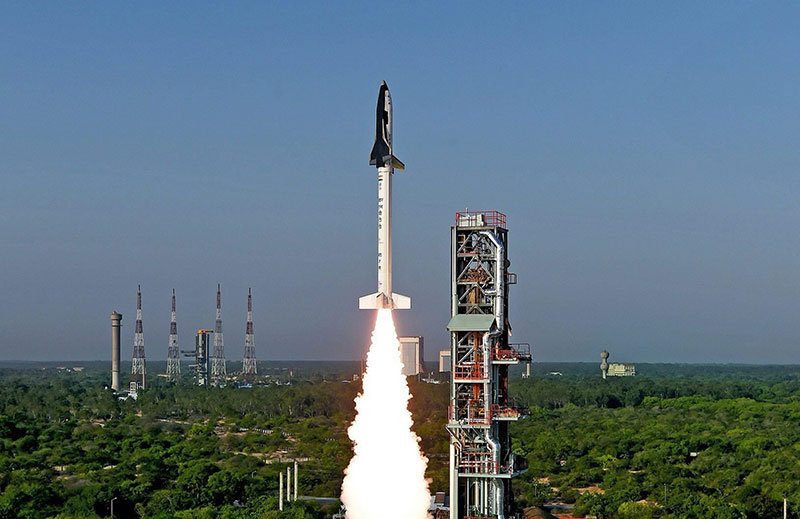 India is keen on developing systems which would reduce the cost of launching satellites
Indian Space Research Organization (ISRO), since its inception in 1972, has been experimenting with various fields associated with space sciences and rocket technologies. The key focus of the organization is to ensure that India derives maximum benefits from its space programs for its socio-economic development.

As the country is essentially an agricultural economy, the emphasis of Indian space programs is more towards receiving meteorological inputs, tracking various weather systems from Indian monsoon to movement of tropical storms, getting correct and relevant information for land and water resources management and knowing more about forest and other resources. Also, for all these years, India has been launching satellites for communications purposes and recently established its own regional navigational system.

Apart from focusing on core areas like meteorology, remote sensing, communication and navigation, ISRO also focuses on areas with long-term scientific, technological and strategic relevance. To understand more about the planetary system, India has successfully undertaken missions to moon and Mars. Similarly, to know more about galaxies, the country has launched an astronomical satellite.

Apart from this, India is keen on developing systems which would allow reducing the cost for launching satellites, to have the capability to launch satellites on demand and to prepare themselves for human missions to space. In order to develop this capability, India has taken a first step towards developing a Reusable Launch Vehicle (RLV) technology.

On May 23rd, 2016, ISRO successfully launched the Reusable Launch Vehicle-Technology Demonstrator (RLV-TD). This launch could be considered a step in the direction of launching a winged body, a spacecraft with delta wings, in future. It is the first step towards realizing the dream of developing an indigenous space shuttle.

It may take around 10 years more to have a usable and operational space shuttle. The RLV—6.5 m long—was launched by ISRO using a nine-ton Solid Rocket Motor (SRM), which burnt slowly for accommodating the vertical lifting of this winged body. It took five years for the team of 600 scientists at the Vikram Sarabhai Space Centre in Thiruvananthapuram to build this body that weighed around 1.75 tons. It is to be noted that normal space shuttles are around 55 m long and weigh more than 2,030 tons.

Indian RLV was flown up to 70 km and made to fall in the ocean (land on a virtual runway in the Bay of Bengal) on its return. Theoretically, such vehicles should land on runways and for any fully developed space shuttle, a 5-km long runway is required. ISRO had three main objectives for this RLV launch: to test the characterization of the aero-thermo dynamics of hypersonic flights; to test the autonomous mission management of hypersonic vehicles; and to test the necessary re-entry technology for the vehicles. All these objectives were achieved. During this test, ISRO tested guiding and navigational techniques and collected information that would assist them to design future missions.

ISRO is expected to move in a systematic fashion for actual realization of this idea. They are expected to conduct tests like LEX (Landing Experiment), REX (Return Flight Experiment) and SPEX (Scramjet Propulsion Experiment) in the next few years. Also, a separate runway, along with a standby runway at a different location, would be required to be built.

Like all other ISRO programs, this one also appears to be well thought of and ISRO can be expected to move in a systematic fashion to realize this dream. However, the time period for realization of this program is too long. It may take more than a decade to have an operational RLV available. The question is: Can India afford to wait? Today, privatization of space is happening in a big way. There are a few private players who have support of agencies like NASA and European Space Agency, and are making quick inroads in the space sector.

The global demand for launching of satellites is rapidly increasing. ISRO has made remarkable progress in the area and launched 74 satellites on commercial terms for various countries. Now, India is proposing to increase the frequency of the launches by having more Polar Satellite Launch Vehicle (PSLV) missions. However, this would cater only partially. It is important to have RLV technology in place at the earliest. For this purpose, the Indian government would be required to increase the budget of ISRO and the organization needs to engage international partners and develop a model for active participation of domestic industry.

Isn't it a delight, if you could spend less on sanitary pads or tampons? And what if you could make... Read More...

KATHMANDU, Dec 2: Nepal Tourism Board (NTB) is planning to arrange shuttle bus service for tourists on the day of parliamentary... Read More...