ODI Status: What next? 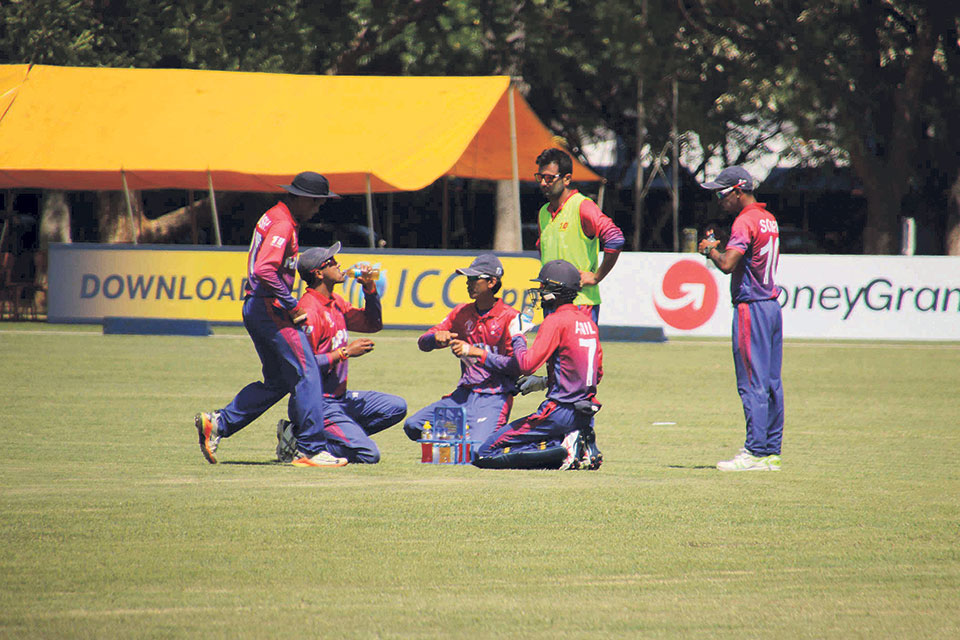 Nepali players during the drinks break in its match against the Netherlands in the ICC Cricket World Cup Qualifier 2018 seventh-place playoff at the Kwekwe Sports Club in Zimbabwe on Saturday. Photo: Raman Shiwakoti

KATHMANDU, March 19: Nepal earned the elusive One-Day International (ODI) status after finishing eighth in the ICC World Cup Qualifiers 2018 played at Zimbabwe. This is the first time Nepal is recognized as ODI nation since their inception in International Cricket Council (ICC) as Associate Nation in 1996.

Nepal lost three matches in the group stage against test nations Zimbabwe and Afghanistan as well as fellow associate Scotland. Similarly, the only match it won against Hong Kong seeded Nepal against Papua New Guinea in the cross-over playoff. PNG finished bottom in the opposite group. Nepal won to secure the ODI status. Both teams, Hong Kong and PNG, Nepal defeated in the tournament lost their ODI status and dropped down to Division Two.

The bottom-line is: Nepal now earns the elite status for next four years. The years of hard-work, sacrifices and toil by the Nepali national players paid off. However, it is going to take lot more of hard-work and efficiency to make sure Nepal keeps the ODI status even after the end of the four years.

The status itself won’t bring matches or funds for Nepal cricket anyway. To start with how flawed the ICC system is, Nepal won only two matches out of six in the qualifiers and yet ended up with the status granted for four years. An achievement for Nepali cricket, obviously for a team which has worked hard for years with their livelihoods on line without any significant support from the cricket association or the government, but only a consolation from the ICC for an emerging country like Nepal that too taking out the same privilege from fellow associates like Hong Kong and PNG.

Hong Kong and PNG both played 19 ODI games each in four years including ICC/ACC events, none against top eight Test teams. Players representing these teams are going to suffer a significant loss going forward in their future. Hong Kong already faced the agony of not having their best batsmen before the tournament even started. Mark Chapman who is looking for a career with New Zealand and Jamie Atkinson continues to prioritize his school job for living.  After the qualifiers, there is no any guarantee that Anshuman Rath might not look for a better career in cricket with Middlesex. The Netherlands lost their ODI status in ICC World Cup Qualifiers held in 2014 before regaining it in two-year long ICC World Cricket League Championship from 2015 to 2017. For some reason, ICC is adamant on limiting the number of ODI teams to 16. Scotland’s shrewd preparation before the tournament and drastic improvement in the results is keeping them on hunt to earn the accolades of participating in the World Cup. There will be more ‘Scotlands’ in four years time. Associates are improving and Nepal’s task will get more tedious.

Nepal is in desperate times to have a cricket governing body, more than ever. Either ICC reinstates the suspended old elected body or forms a whole new board with fresh elections and contests. Nepal must find qualified persons selected with proper tests and interviews before appointment of new members in new board is proposed. The later seems a better option given the poor and proven track-record of failure and corruption from current suspended Cricket Association of Nepal (CAN).
With old or new CAN at place, Nepal’s first target should be to sort out the domestic calendar.

Everest Premier League (EPL) and Dhangadhi Premier League (DPL) has risen to become sought out ICC approved T20 competitions in associate world. It is no brainer why it can’t be done with the 50-over program as well with some help from association or government. The recently held Parliament and House of Representatives elections are set to influx changes in the division of the territorial domestic teams too. The seven provinces shall replace the previous regions. Each province hosting their own championship or selection games before the best players representing the Province’s first team in a nationwide apex selection tournament participated by all the seven provinces in all three T20, 50-over and 2/3-day formats.

A settled domestic setup will help producing the new players or allow the forgotten but experienced players like Anil Mandal or Subash Khakurel to stake their claim again for the national team. In the level Nepal national team is going to play batting is going to win you more matches than bowling. Nepal needs to provide players like Rabindra Jung Shahi and Ishan Pandey, both, co-incidentally, opening batsmen winning Best Player of the Tournament awards in respective Khukhuri T20 Challengers Cup and University T20 Cup, with longer format to develop further and make their claims for fragile opening position in the national team. Opening batting has been Nepal’s Achilles-heel in international cricket with game of musical chair going on since forever.

At the end of the day, it all boils down to the how players fare on the field in the given day. This gas been Nepal’s formula of success all these time, it won’t change overnight, amid the lack of support at home from administrative body or government. Nepal is on verge of losing their star players like Shakti Gauchan and Gyanendra Malla for different reasons. Nepal needs to start scouring their gifted talent pool to buckle up before the big games arrive.

Once the above treacherous tasks are sorted; adequate training facilities, international bi-lateral tours and an upgraded coaching and support staff should be the next step in Nepal’s next and important mission to salvage the ODI status in four years time.

KATHMANDU, March 20: The national cricket team has returned home on Monday from Zimbabwe after securing the One Day International (ODI)... Read More...