Obstruction of Budhiganga River likely to cause outburst 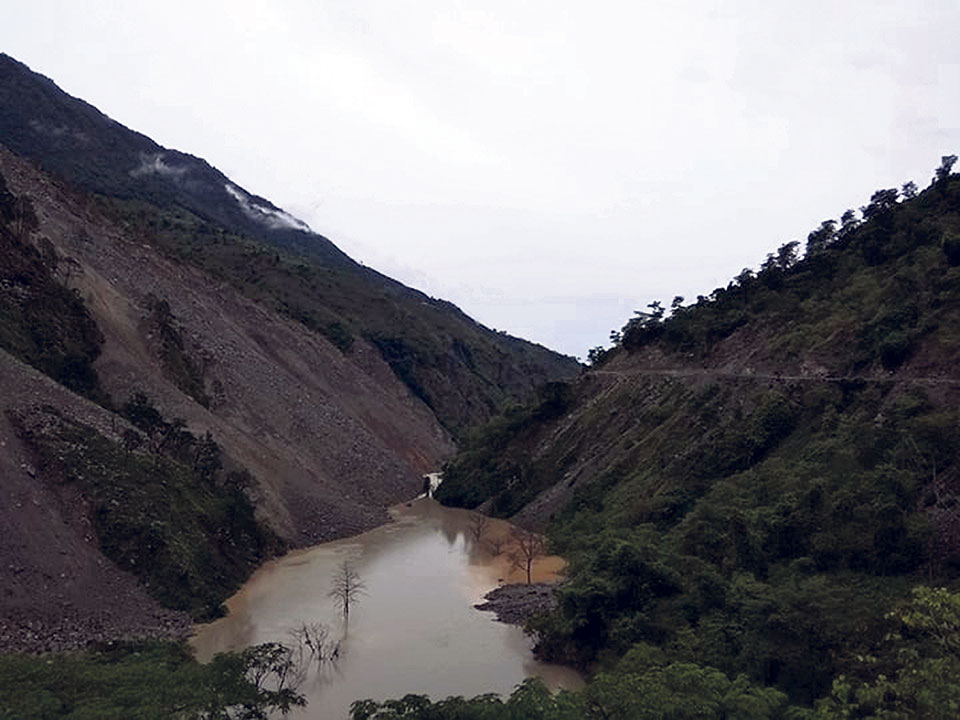 BAJURA, July 21: Landslides in Paima of Bajura district has threatened to block the Budhiganga River, triggering panic among the locals of a possible outburst of the collected water.

The downstream settlements are fearful of flash flood due to the obstruction of the river. Dozens of villages face risk of flash flood as the landslides continue in the area between Triveni Municipality and Budhiganga Municipality.

Although landslides have been occurring here frequently since a decade, the area has seen massive landslides only since last year.

Landslide in the area is common even during the dry season but there is more risk during the monsoon, say the locals. The incessant rainfall has accumulated a large amount of debris in river. The landslide has already diverted the flow of the river toward the side of Triveni Municipality.

There is also the risk of landslide from the slopes of Budhiganga Municipality in Amkot village. The locals fear of a catastrophe if the river gets obstructed.

Despite the widespread panic, the District Disaster Management Committee hasn’t made any preparations to face the crisis.

Chief District Officer of Bajura, Ganga Prasad Neupane, informed Republica that the obstruction of the river poses risks to over 700 households in Bajura and Achham.

BAJURA, June 18: More than 100 villages in the district are in high risk of flood and landslide due to... Read More...

One dead, several affected by viral fever in Bajura

BAJURA, May 5: One person has died and several others affected by viral fever in Bajura district. The disease is spreading... Read More...

BAJURA, Jan 20: The CPN (UML) in Bajura has today shutdown the district headquarters Martadi to protest the death of... Read More...