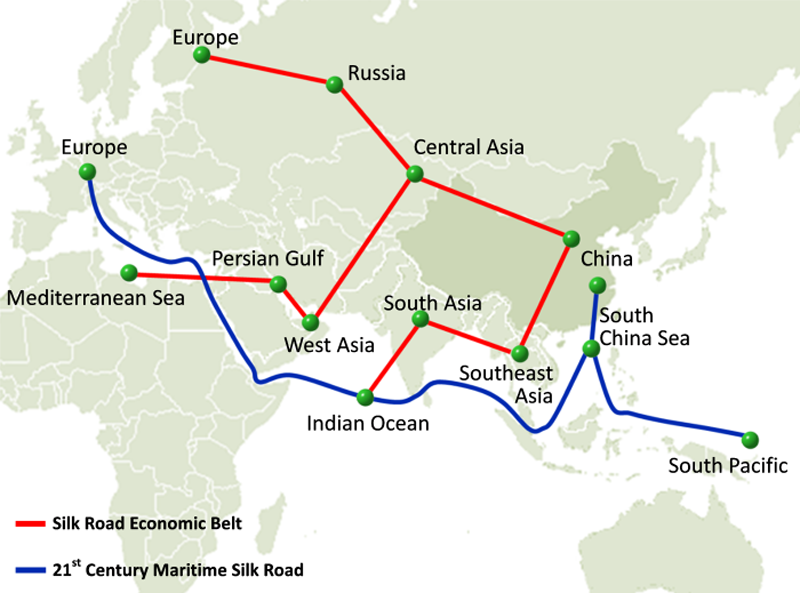 The author is a CPN-UML lawmaker and chairman of the Development Committee in the Parliament of Nepal
news@myrepublica.com

China may have a hidden motive behind its OBOR. But we should not hesitate to take advantage of this initiative for that reason alone.

China has proposed an ambitious plan to build a wide network of land and seas routes to enhance global connectivity and has even invited India to join the project. From historical point of view India is the converging point of Maritime Silk Road (MSR) and the ancient land-based Silk Road. Also, for most of the past 2,000 years India and China have traded and interacted extensively via Nepal.

China says that its One Belt, One Road (OBOR) initiative is open to any country that accepts Chinese investment in its infrastructure. If so, any participating country will enjoy an unprecedented level of Chinese investment.

But what does the Communist Party of China really hope to gain from its OBOR initiative? One stated goal is to help balance the economic inequalities between its highly-developed coastal regions, where most of China’s 650 million middle-class people live, and the interior regions, where income levels are considerably lower.

Careful analysis makes it clear that OBOR is but an attempt to increase China’s global influence, just like it used the ancient Silk Road to expand its sphere of influence.
China’s OBOR call did not appear out of vacuum. Behind this lies the emergence of China as an engine of global economy. With its consistent economic growth, China has made remarkable progress over the past few decades, made possible through coherent policies, steadfast focus on economic development, and adaptive approaches to change all around.
The term Silk Road, which is now gradually being replaced by a broader phrase ‘Silk Route’, has historical significance. It not only brings with it a sense of adventurous trail of camel caravans in the mountains and trackless wilderness but also carries with it a historical process in which Asia, and in particular China, interacted with Europe and other continents. In addition to silk trade, the road, through its overland and maritime routes, facilitated transfer of Renaissance inventions like paper, compass and gunpowder and increased cross-cultural ties.

China has repeatedly said that it greatly values its friendship with Nepal.  China may have some hidden motive behind pushing OBOR. But we should not hesitate to take advantage of this initiative for that reason alone, as we are all aware of the consequences of over-dependency on a single country. Who can easily forget the five months of border blockade? A sovereign nation is entitled to make decisions on its own.

The US and European countries have already peaked in terms of their development. Now it’s Asia’s turn to prove its mettle. Thus modern-day diplomats in Asia and beyond envision reviving the Silk Road. Historically, the Silk Road was not just about trade and cultural exchanges. On multiple occasions, powerful dynasties based in China and India sent troops to Central Asia to fight military confederations that threatened their security and to conquer rebellious rulers in Central Asia. Those were the days the Chinese dinosaur roared.

One American President used to say that China is like a sleeping dinosaur and if it wakes up, it’ll conquer the world. Dinosaurs have long since disappeared but China is marching ahead as one of the world’s most powerful economies, and it is helping its neighbors along the way.

China is not only densely populated but also huge in area. Gradually it’s on the verge of becoming the most powerful economy in the world. Consequently, it is planning to recreate its historical prominence through the Silk Route again.

Despite sharing border with China, Nepal is nowhere close to China in terms of development.  But Nepal is not a poor country in any way. It has enormous natural resources and rich culture and history. Yet we continue to be rated as among the poorest countries in the world. The situation is truly abysmal. We have not even been able to spend our development budget properly: out of Rs 3.5 billion set aside for capital expenditure this year, we have spent only Rs 700 million thus far. This hints of the scale of our economic challenge in Nepal. The OBOR initiative can help us overcome this.
Silk Road provides unique opportunity for development of Nepali tourism and for connecting Nepal to the several ancient Buddhist sites along the route. China has already proposed joint development of Nepal-China Silk Road Economic Belt. This includes development of rail network from Tibet to Kathmandu and from Kathmandu to Patna, India.
Historically, Nepal provided free and unrestricted trade route between South Asia and China and even to central Asia via Lhasa. This is why a large number of Nepalis settled in Lhasa and other parts of Tibet and why there is a Nepali consulate in Lhasa, the only diplomatic mission in Tibet. This is the time to revive these ancient roots of our friendship and unlock the true trade and connectivity potential between China and Nepal. At present Nepal and China have only a few designated routes for trade and other exchanges.
We can work on development of promising new routes like the Lumbini-Mustang corridor that crosses Mustang and enters Tibet following the Kali Gandaki River.

China and Nepal also have to encourage their private sectors to explore new trade opportunities between the two countries. Parallel to this, Nepal needs to plan, design and start building infrastructures directly linked to the OBOR project. In this Nepal can tap the various Silk Route funds that China has set up.

Nepal can once again connect Tibetan plateau to the fertile valleys in northern part of the Indian sub-continent. Observers say rail connectivity with China will spur the globalization of the Nepali economy. Once a rail connection with China is established, Nepali goods can be transited to international markets through the Eurasian transport network, which is vital if we are to overcome our geopolitical constraints. But the entire South Asia can benefit from this network.

Perhaps well aware of its great benefit, most SAARC countries plan on signing up for OBOR. Why should only Nepal remain behind?

KATHMANDU, May 12 Nepal has officially signed a memorandum of understanding with China's One Belt and One Road initiatives. ... Read More...