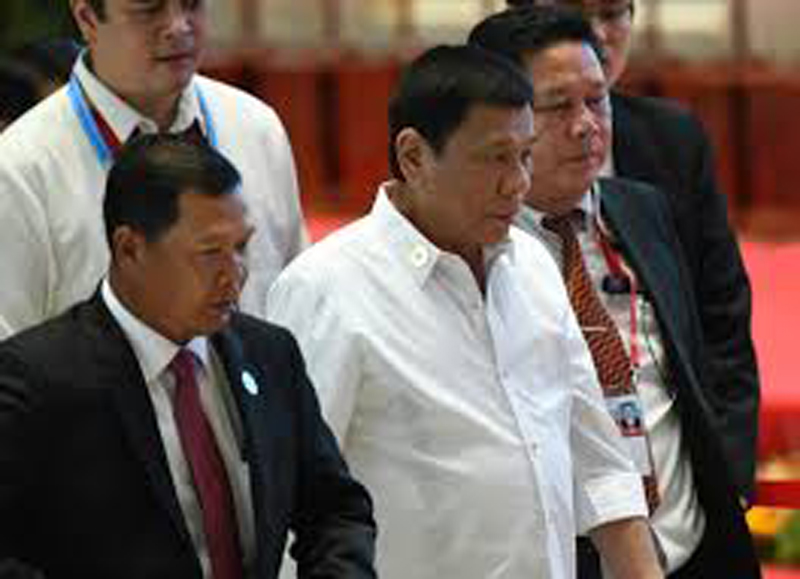 Vientiane, Sept 6: US President Barack Obama cancelled a meeting at a regional summit on Tuesday with foul-mouthed Philippine leader Rodrigo Duterte after being branded a "son of a whore".

The pair had been due to meet in the Lao capital of Vientiane at a gathering organised by the Association of Southeast Asian Nations, an annual event meant to foster harmony but which often highlights regional rows.

This year's edition was launched with a spectacular fallout between the United States and the Philippines, longtime allies that have seen relations plunge under a barrage of insults from Duterte since he came to office on June 30.

Obama's aides announced that his planned meeting with Duterte on Tuesday afternoon had been called off following a fresh tirade by the Filipino leader the previous day.

Shortly before flying to Vientiane, Duterte warned he would not be lectured by Obama over a war on drug crime in the Philippines that has claimed nearly 3,000 lives in just over two months -- an average of 44 a day.

"You must be respectful. Do not just throw away questions and statements. Son of a whore, I will curse you in that forum," Duterte told reporters when asked about his message for Obama.

Duterte, who has quickly earned a global reputation for his acid tongue, then used typically colourful language to describe their planned meeting if rights issues came up.

"We will be wallowing in the mud like pigs if you do that to me," he said.

Wallowing
Duterte had previously also branded the US ambassador to Manila a "gay son of a whore", and sought to taint the reputation of Pope Francis's mother in similar fashion.

Duterte was elected to office in a landslide this year after pledging to kill 100,000 people in an unprecedented war on crime.

When faced with criticism from the United Nations over an apparent spate of extrajudicial killings in his crime war, he responded with what has become familiar abuse.

"Maybe we'll just have to decide to separate from the United Nations. If you are that disrespectful, son of a whore, then I will just leave you," he said last month.

Following the Obama backlash on Tuesday, Duterte struck a rare moment of contrition, albeit qualified.

"While the immediate cause was my strong comments to certain press questions that elicited concern and distress, we also regret that it came across as a personal attack on the US President," he said in a statement.

The United States also sought to ensure there was no enduring fall-out with one of its most important allies in Asia and former colony.

Top Obama aide Ben Rhodes told reporters in Laos on Tuesday evening the broader relationship with the Philippines "has been and remains rock-solid".

He also said Obama would likely hold an informal discussion with Duterte in Laos on Wednesday or Thursday, though formal talks remained off the table.

The setback in US-Philippine relations comes at a crucial time in the region, with China seeking to cement control over the contested South China Sea.

The Philippines, Vietnam, Malaysia, Brunei and Taiwan also have competing claims to parts of the sea, but have watched China expand its presence by building artificial islands in key locations.

An international tribunal ruled in July that China's claims to the waters -- through which $5 trillion in global shipping trade passes -- had no legal basis.

The verdict was widely seen as a sweeping victory for the Philippines, which filed the suit under the previous administration of Benigno Aquino.

But China has vowed to ignore the ruling.

The South China Sea issue is expected once again to be discussed at the three days of meetings hosted by ASEAN, which will be attended by Chinese Premier Li Keqiang.

Leaders of Japan, South Korea, Australia, India, New Zealand and Russia will also be in Vientiane.

Laos is the final Asian visit of Obama's eight-year presidency, during which he has sought to refocus American military, political and economic resources on the region.

It is also the first visit by a sitting US president to Laos, which the United States secretly carpet-bombed for nearly a decade in the Vietnam War, killing or injuring tens of thousands of people.

Obama on Wednesday announced greater help in clearing the bombs, saying it was a "moral obligation".

KATHMANDU, April 5: The cabinet meeting on Tuesday cancelled a foreign visit by two judges on the ground that the trip... Read More...

US detains Mexican immigrant in Seattle covered by Obama program

US immigration authorities have detained a 23-year-old Mexican man who was brought to the United States illegally as a child... Read More...

Trump will get wake-up call when he takes office, Obama says

WASHINGTON, Nov 15: President-elect Donald Trump is in for a quick wake-up call and will have to adjust his temperament when... Read More...