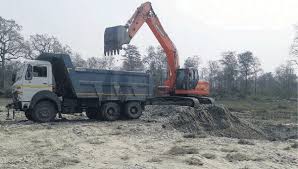 BETRAWATI, July 25: Tough measures are being mooted to prevent unlawful mining of rivers and rivulets in Nuwakot district. A meeting of the district monitoring and coordination committee held at Bidur on Wednesday took the decision to place stringent measures for the prevention of ongoing extraction of river products.

Santaman Tamang, chief of Nuwakot district coordination committee, informed that security personnel will also be mobilized to book those involved in extracting river materials defying the law. He further informed that the meeting has decided to ban use of heavy equipment for mining and only allow transporting mined products on daytime.

On the occasion, Belkotgadhi municipality chief Rajendra Narayan Khanal drew the district administration's attention to check illegal and rampant extraction of sands from rivers being sensitive to its dire consequences. "It will trigger the rivers to change their course on one hand and increase criminal activities on the other", he added.

Drona Pokharel, Chief District Officer, called for support from all sides to fully bring the extraction drive under control. There is a legal provision which does not permit extraction of river products (pebbles, gravel and sand) with the use of heavy equipment such as excavator during three months from mid-June to mid-September.

The local level also sticks to its condition not to allow extraction of river products in the three months while contracting out tax collection from mining. With the start-up of the rainy season, the mining of river products has been on the rise in Trishuli, Tadi, Kolpu, Likhu, Salakhu, Falakhu and Samari rivulets with the use of heavy equipment.

NUWAKOT, Jan 2: A unification torch rally is to be organized along the ancient route from Gorkha to Kathmandu via Nuwakot... Read More...

NUWAKOT, June 28: The District Administration Office, Nuwakot continues distribution of relief amount to those abducted and displaced during the... Read More...

NUWAKOT, July 17: The District Livestock Service Office (DLSO), Nuwakot, has announced that the district has become self-sufficient in meat and... Read More...