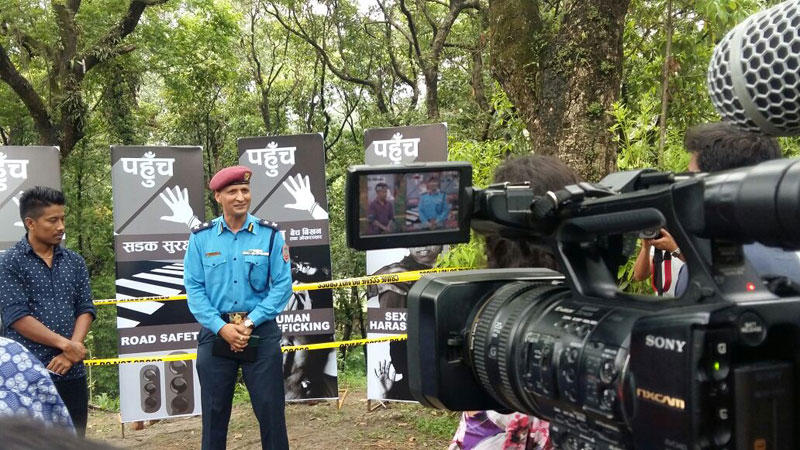 KATHMANDU, June 21: ‘Pahunch,’ a reality show focusing on actual challenges and circumstances undertaken by the police while solving crimes, will be aired from August this year. Eight contestants from different walks of life will be performing different tasks in the show. This is a first of its kind reality show, and has been conceptualized by Search for Common Ground (SFCG) Nepal and funded by UKAID.

According to the press release, the clues, setting, and background story for each task is based on facts but presented in a fictional manner. It further states that ‘Pahunch’ aims to increase the trust, confidence and awareness of the public towards the security and justice sector.

The eight contestants will be mentored by officials from the Nepal Police who specialize in units such as homicide, robbery, human trafficking, etc.

Yubakar Raj Rajkarnikar, director of programs at SFCG stated, “Reality shows have great potential for peace building as they spark dialogues around topics which are hardly discussed in the public sphere. Participants will be mentored by the Nepal Police and will solve cases by being in their shoes. We hope this approach will cultivate a sense of empathy and also impress upon the citizens the importance of collaborating with the police to uphold peace and security in the country.”

The show will be hosted by actor Reecha Sharma. Director Nischal Basnet and actors Gauri Malla and Khagendra Lamichhane will appear as guest celebrities in the show. Lamichhane said, “The concept is very fresh. The tasks are so realistic that it will challenge both the participants and the viewers which will definitely help them empathize and connect with the work being done by the Nepal Police.”

The winner of the show will be awarded a cash prize of Rs 200,000 along with gift hampers.

KATHMANDU, July 21 :Police have arrested a man on the charge of defrauding several individuals by creating a fake Facebook... Read More...