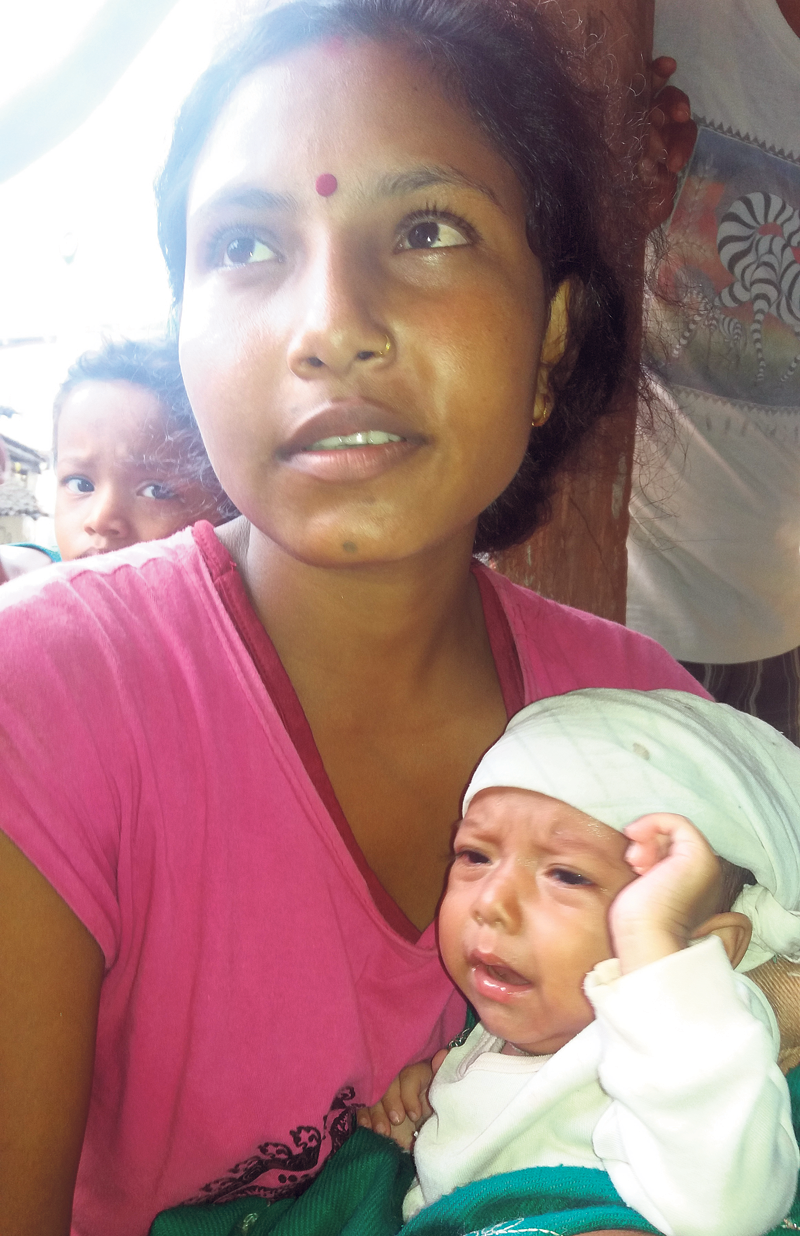 Sabita Pariyar, the nursing mother who saved her family by perching on peepal tree.

CHITWAN, Aug 12: It was raining heavily since Friday evening. As night deepened, the rain got heavier. It even felt like a cloud burst at times. Locals of Chitai area were trembling with fear that the Chitai River might get out of control anytime. The apprehension came true. The river got swollen and flood entered their houses forcing them to flee.

Among dozens of people who fled for their life was Sabita Pariyar. But she was not alone. Her five month old son was sleeping with her and next to him was another three-years-old son. When she heard neighbors call to flee, she picked both the boys and rushed out. But coming out to the safer zone was not that easy. Water had surrounded her house and she could not swim across with her two kids. She was dumbfounded as the water level was rising very fast. When her maternal uncle saw her stuck, he came to the rescue and the family was taken to safety. But more was to come her way. The trouble was not over yet, it was just the beginning.

A bridge damaged by recent flood in Madi of Chitwan district in this photo taken on Saturday.

Along with other villagers, she reached an area that not inundated by floods. Feeling secure, she stayed there along with some other families. But soon she realized that her family was not safe there anymore. Floods had circled in the area. Realizing that she was trapped, she was becoming hopeless. She thought that the flood was not going to spare her family tonight. She began to anxiously scan her surroundings and spotted a peepal tree. In despair she started climbing the tree along with the kids. While the elder one was helping himself, she managed to drag the younger one with her. Seeing her, other families also climbed the tree and remained perched on it.

Pariyar, a resident of Madi Municipality-1, Dhikun, Bhairabpur passed the night in terror as the water level kept rising. The tree eventually gave refuge to three other families of the same village and saved them from being washed away by the flood. As the rain stopped later, and water level receded, these families were rescued by other villagers. Pariyar says she and her family survived just because of the tree.

Pariyar's neighbor Som Maya Pariyar had also perched on the tree through the night along with her four children, aged four, six, eight and eleven. Her mother and father also did the same. The peepal tree actually became refuge to fourteen people including eight children that night and saved their lives.

Som Maya and Sabita have still not been able to overcome the terror. They call their and other victims life a reincarnation. “We would have easily died yesterday. But god was gracious. This tree saved us,” Som Maya said.

Sharing her experience further she said that it was very challenging for them to keep balance of the body the whole night. Had they not been careful in balancing themselves on the tree, they would have fallen down into the river and washed away.

“From the tree all we could see was an endless pool of water. And on top of that occasional thunders and lightening were scaring us to death. It was the most terrible night,” Som Maya narrated. “Drenched to the bone by rain, children and elders were trembling alike with fear and cold,” she added.

When the rain got thinner and the water level receded, these victims saw some torch lights in the distance. They shouted for help and were eventually spotted by the rescue team and taken to safety.

“Thank god, the bridge over the river was okay. When we spotted them on the peepal tree, we crossed the bridge and rescued them all,” said Surya Bhushal, a member of the rescue them that had gone in search of the families that were perched on the peepal tree. “When we saw them all and realized that they were safe, it was a huge relief for us,” he added.

The team, which involved Red Cross volunteers, had rescued the children and adults after searching them for four hours through the night.

Water levels in all small and big rivers in Chitwan have increased significantly. Many human settlements near rivers have been severely damaged due to flood and landslides and many more are in vulnerable conditions.

According to CDO of Chitwan, Narayan Prasad Bhatta, detail account of affected families and houses is yet to come in. “Roads and bridges are in poor condition. It is not easy to even reach out to the affected areas. We are however trying our best to reach out to them and help,” he said. “To prevent losses, we have issued warnings and alerted people that are in vulnerable zones to go to safer places,” he added.

One dead, two severely injured of a same family after tree falls

TANAHUN, July 2: A school student died, and two other sustained injuries when a tree suddenly fell down on their... Read More...

KATHMANDU, July 16: Jhanknath Phuyal, a permanent resident of Nuwakot, owns a house and a confectionary in Kathmandu. He and his... Read More...

Revenue collection from mountain climbing doubles this year
23 minutes ago