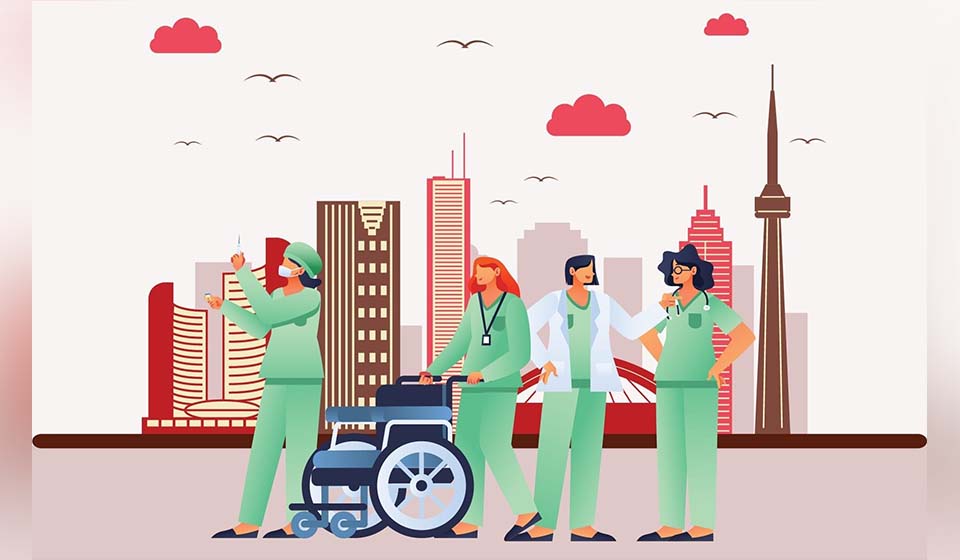 The author is pursuing my Master's Degree in Nursing at Khon Kaen University, Thailand. She also operates a TikTok awareness channel under the ID (@sahara.dhakal), where she advocates against child-rearing malpractices and offers new mothers advice on age-appropriate infant diets.
news@myrepublica.com

“When citizens leave their home countries for better opportunities, the government fails the country. Likewise, citizens fail when the experience of leaving their home country becomes something joyful rather than a burden of sorrow associated with not being able to work and serve their own country.”

It is surprising how the news of 10,000 nurses leaving abroad as skilled laborers brings excitement to the citizens of Nepal, where leaving the country is seen as an opportunity to succeed and staying behind as a loss and failure. Currently, the news of nurses temporarily serving abroad is printed in every newspaper, and the government is gloating about it.

The five-year bilateral agreement to send 10,000 nurses and other healthcare workers to the UK has been successfully drafted. The Ministry of Labor, Employment, and Social Security has stated that the annual pay for registered nurses ranges from Rs 4 million (27,000 pounds sterling) to Rs 4.8 million (32,000 pounds sterling). This offer is very enticing to a non-lucrative and undervalued career like nursing; it has filled many Nepali nurses with new promises and hopes. Even if it’s not the UK, nurses of Nepal are now aware of the pay they might be getting when working abroad.

Let’s do a little fact-check. Nepal is a country where there are 0.17 doctors and 0.5 nurses for every 1,000 people. Compared to the WHO recommendation of 2.3 doctors, nurses, and midwives per 1,000 people, this amounts to 0.67 doctors and nurses per 1,000 people. Unfortunately, instead of focusing on developing health personnel and discouraging international recruitment, our government sees it as another way of welcoming remittance, unmindful of its consequences on the country’s health care system.

While the health profession is already infested with brain drain and skill drain issues, numerous push and pull factors also lead to the migration of health professionals, especially nurses. Push factors are situations that make nurses decide to leave their own country. In contrast, pull factors are the characteristics of a particular nation that draw nurses there, influencing their decision to move there. Hence the foreign country will always open the doors and opportunities for such a demanding profession and authorities can neither prevent nurses from exploring opportunities abroad nor prevent nurses serving in Nepal from quitting their jobs and going abroad. In order to stop this, hospitals, especially private ones, need to stop exploiting nurses, and the Ministry of Health (MoH) needs to develop equal pay guidelines. Unfortunately, despite the increased number of patients and hospitals over the last two decades, the government has failed to increase the number of nurse openings and help formulate laws to prevent nursing professionals from being misused.

A total of 1,500 PCL nurses and 300 bachelor’s-level nurses are produced in Nepal annually. Even though the nursing profession offers a wide variety of job opportunities, only a quarter of graduates reach cities’ best service centers. Most nurses struggle for wages to support their families due to underpaying and overworking conditions. The majority of them don’t even get hired for a long time. Hence, there is certainly a common sense connection: If you were a low-wage worker, why aggressively attempt to go back to work at a lousy, low-paying job, when you can make more money and gain more respect working abroad?

The standard operating procedure at the hospital is three nurses per operating table, and the number of beds in the intensive care unit should equal the number of nurses working there. However, government-run and private hospitals do not follow any of these practices. Three nurses should care for each patient at the operating table, and there should be an equal number of nurses for general and intensive care unit beds. According to an International Labor Organization (ILO) assessment, nurses in government hospitals of Nepal are overworked and burdened with multiple obligations.

According to the World Health Organization (WHO), a nurse-to-patient ratio should be maintained at 1:6; Nepal is not even near the recommendation of the global health body. While the country is already facing a shortage of nurses, there’s nothing to be happy about sending 10,000 daughters abroad who, if given a better chance and opportunity, would happily serve in their own country. The bilateral contract by the government is another example of flawed government decisions and the failure of policymakers to discover the loss of human resources in such agreements.

As we watched our healthcare system crumble during Covid-19, we realized how far behind our healthcare system is and how we lack medical doctors and nurses. After witnessing that, making such a move seems uncalculated on the part of the government. Even though nurses sent abroad are guaranteed the same rights, privileges, protection and dignity as their counterparts in the destination country, we all know how common it is to exploit migrants from underdeveloped countries. We have reasons to be skeptical because it is not uncommon for us to hear about the exploitation of skilled/non-skilled immigrants abroad. Above all, the main questions for our government are:

Why can’t the government provide the best environment for nurses to live and work in Nepal?”

“How long will the nursing profession keep getting exploited from the discriminatory practices in private and government hospitals?”

Nurses need to have their voices heard and be recognized for their values. Remember, the joy of nurses’ moving abroad is not news of success and happiness; it is an invisible slap that the government receives for its failure and will definitely leave a mark of shame for the reigning government.

While in an advanced American hospital, I thought of hospitals back home, villages where women are forced to give birth... Read More...

KATHMANDU, Feb 4: Millions of Nepali migrants living and working in various foreign countries are not likely to be able to... Read More...

KATHMANDU, Aug 1: The Ministry of General Administration (MoGA) has asked all the ministries to provide details of civil servants... Read More...