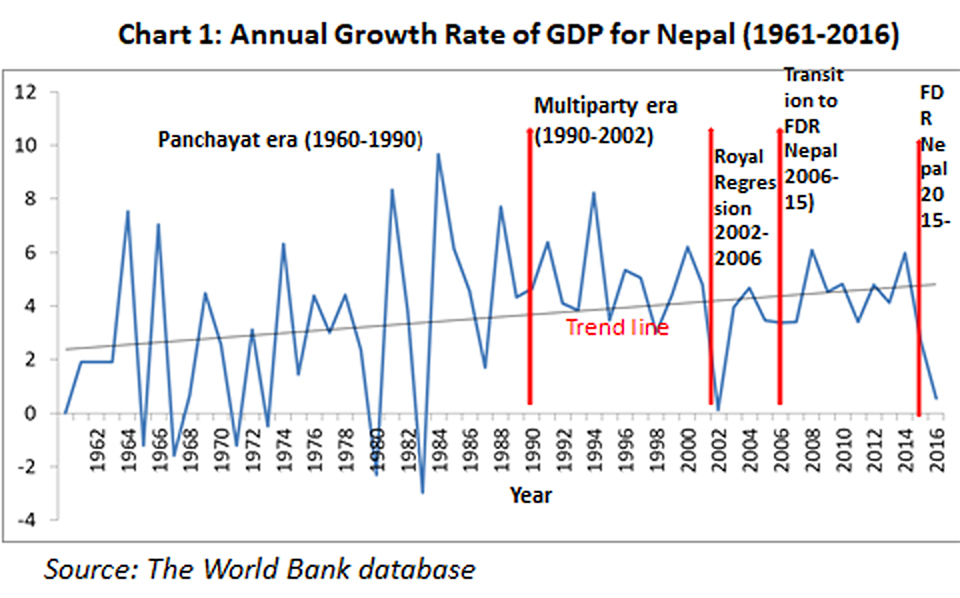 There is no shortage of communist ideologues in Nepal who assume that now is time for the country to solely focus on economic prosperity.

Way back in 1984, there was a conference on political economy organized by Shanker Dev Campus, Tribhuvan University, and I happened to be in the organizing committee. One of the speakers at the conference, Dr Harka Gurung, gave a fascinating explanation of political economy, i.e. the confluence of politics and economics. Using the analogy of Nepalis eating dal bhat every day, Dr Gurung said, “You cannot just eat plain rice (bhat) and drink dal as a soup afterward; the proper way of Nepali eating is you mix and mesh dal with bhat before you have a scoop in your mouth. Similarly, politics and economics are inseparable, they come together like dal bhat; all political decisions have economic ramifications and vice versa.” By the way, the question of dal bhat in Nepal, as in Bangladesh, implies the question of survival.

Of late, our politicians have been trying to fool Nepali people by separating politics from economics, or the other way round. Mention must here be made of Baburam Bhattarai, an unstable leader of his own kind, who is now selling the idea that now is the time for Nepal to concentrate on economic development. His new political outfit called Naya Shakti Nepal has a long term vision of removing Nepal’s poverty and unemployment within a decade, graduating to mid-level development within two decades and, finally, attaining high level of economic growth within next four decades. The problem with his conception is that, as Keynes used to say, “in the long run we all are dead”. Bhattarai must be aware, thanks to his extensive literature review on development models, that one does not need to wait for 40 years; meaningful change is possible even in 5-10 years.

There is in fact no shortage of communist ideologues in Nepal who assume that, with the country being declared federal democratic republic and all political problems seemingly resolved, now it is time for the country to concentrate on economic prosperity. Remember, this idea was one of the drivers of the recent unification among communist parties.

Again, way back in 1980, after the monarchy-led one party regime called Panchayat had emerged victorious in a referendum, the then Prime Minister Surya Bahadur Thapa also sought to fool the Nepali people by saying that all political problems have been resolved and it was now time to concentrate on economic development.

To commemorate this saying, there was even a cartoon published in a weekly newspaper where Thapa is seen entering a messy room named “economic development” with a broomstick after cleaning a nest called “politics”. Now, I would assume Dr Gurung would be greatly irritated by such bifurcated views on politics and economics.

The chart alongside seeks to chart the developments of politics and economics in Nepal in the past 55 years, from 1961 to 2016. It shows average annual growth of GDP in percentage terms, with a fitted trend line, super imposed by political or regime change. The data on annual average growth rate is collected from the database maintained by the World Bank. Since reliable data beyond 1961 is not available, it is difficult to say what happened after political changes in 1951. However, a study by James A Robinson, co-author of renowned book, Why Nations Fail: The Origins of Power, Prosperity and Poverty, estimates close to zero growth rate for Nepal between 1950 and 1980.

Joined at the hip

As the saying goes, a picture is worth thousand words. One can immediately discern a couple of interesting trends from the chart. The overall growth is not only low; it is also highly erratic, similar to changes in governments in Nepal. The average economic growth rate for Nepal for past 55 years comes to 3.66 percent. (Those claiming to have achieved double digit growth should be ashamed.) Using a rule of thumb method to calculate doubling time (72 divided by growth rate), we come to nearly 20 years; in other words, even if we don’t do anything we will be doubling our incomes in 20 years. I suppose this is what Bhattarai was thinking about when he spoke of attaining medium level of development in 20 years.

Cross-sectional comparison of the growth rates indicates that Panchayat system (1960-1990), which is normally thought of as a stable regime, turns out to be rather volatile, much more volatile than multi-party democracy. Both highest (9.68 percent in 1984) and lowest (-2.98 percent in 1983) growth rates were observed during Panchayat era. Save for 0.12 percent growth rate in 2002—possibly due to the 2001 palace massacre and intensification of Maoist conflict—and 0.56 percent in 2016—possibly due to April Earthquake and unofficial Indian blockade—there was no negative growth in the period of multiparty democracy. This should come as bad news for those hankering for monarchy and Hinduism.

What better way to gauge the impact of climate change in Nepal than through the horse’s mouth: the common folks. Read More...

Don’t want to be where I was 10 years ago: Deepika Padukone

Actress Deepika Padukone’s aim is to look ahead in life, and she says she wants to learn and grow with every... Read More...