Number of tourists continues to rise in Manasalu 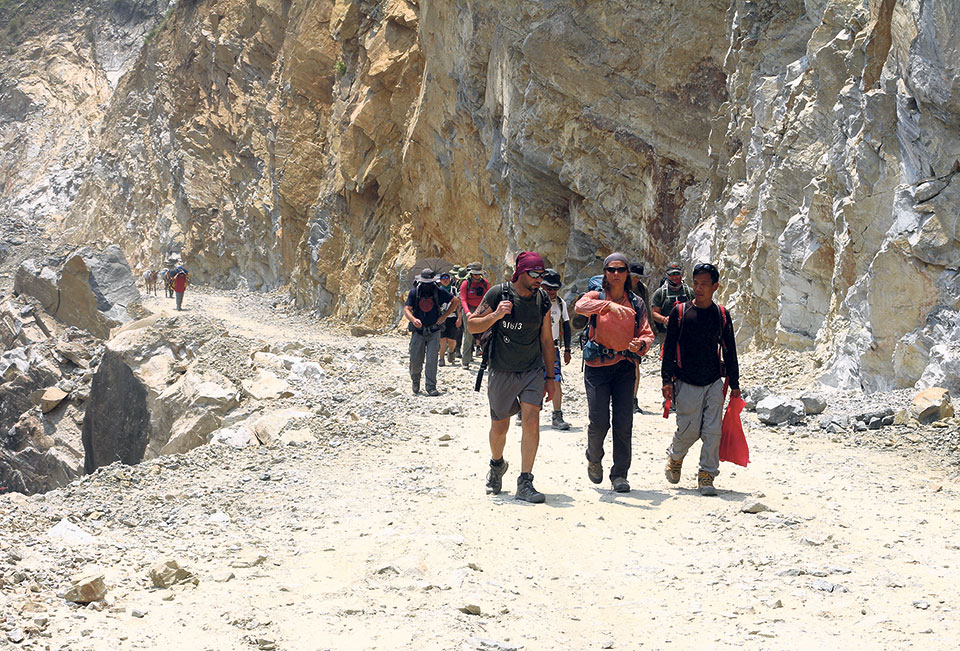 GORKHA, June 2: Manaslu Circuit continues to garner an increasing number of tourists following the boost in figures last year. According to statistics published by Manaslu Conservation Area Project (MCAP), more than 8,000 visitors are expected to make a trip through the famed circuit this time; the number was limited to 7,640 last year.

"The number of visitors had depleted significantly after the 2015 earthquake," MCAP coordinator Narendra Lama said. "The numbers are exciting this year, however, preceded by improved stats last year." The months of March, April, May, October and November are the most favored periods by tourists for the Manaslu Circuit Trek. In March, 959 foreigners, and in April, 1,159 foreigners visited the region this year.

The Circuit Trek has had upgrades after the crippling earthquake, and with the upgrades there has come a surge in tourism activities in the region.

Regular maintenance, widened paths and MCAP's management of the region have significantly contributed to the increase in numbers after the calamity. Installation of new bridges and alleys has also made the tour easy for tourists visiting the northern Gorkha trials. Improvement in lodging, food and security could double the number, says Bishnu Gurung, a Bihi Fedi local.

A total of 52,589 tourists have trekked in the region between 1993 and 2019, according to MCAP. Entry for SAARC nationals stands at Rs 1,000 per head whereas a price of Rs 3,000 is charged for people of other nationalities; the visitors require a permit of eight months to trek in the region. The revenue generated via tourism in the region is used for conserving and promoting Manaslu region.

While the majority of visitors are Americans and Europeans, there has been a growth in the number of domestic tourists lately, according to MCAP that keeps track of foreign tourists. Foreign nationals prefer to trek in groups in the region, and usually come to watch the varying geographical topology, mountain ranges, and Larke Pass.

Domestic tourists hit over lack of air service in Karnali

MUGU, April 1: Air service has been hit in Karnali zone after the aircraft of private airlines companies moved to... Read More...