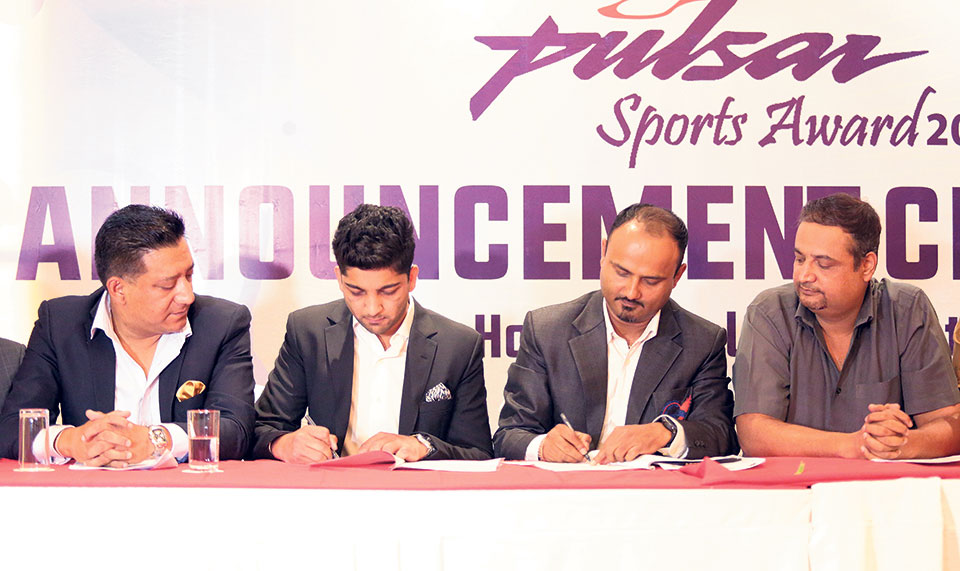 KATHMANDU, May 27: The Nepal Sports Journalist Forum (NSJF) Pulsar Sports Award-2019, which felicitates the coaches and players contributing the most in Nepali sports in the past year, is set to be held on July 2.

The forum organized a press meet in Kathmandu on Sunday to announce the date for the 16th edition of the awards. President of the forum, Devendra Subedi, informed that the ceremony was being organized on the day to mark the International Sports Journalist Day.

The forum informed that like the previous editions of the event, it will add one more award category this year, taking the total number of awards to 10. The new category includes International Asian Sports Journalist award.

The best players in men’s and women’ categories, the best coach and the winner of the People’s Choice Award will be rewarded with a Pulsar bike each, while the winners of other categories will get Rs 50,000 each.

Likewise, the forum and Hansaraj Hulaschand and Company have extended the awards sponsorship deal for the next year. President Subedi and Hansraj’s Executive Director Abhimanyu Golchha signed on the agreement paper on the occasion.

The sponsorship deal includes cash and other equipment worth Rs 2.85 million, including four Pulsar bikes.

Golchha expressed happiness on partnering with the forum for the awards. “Our partnership with NSJF is about to reach 10 years. We have contributed nearly 10 million for the forum,’’ Golchha added, “We have assisted more than Rs 2.85 million this year. This cooperation is 20% more than last year.’’

The award ceremony will be held at Nepal Academy Hall in Kamaladi, Kathmandu.

KATHMANDU, June 16: Volleyball diva Reshma Bhandari is one of the five nominees of the Peoples' Choice Award of the... Read More...

KATHMANDU, Jan 1: The decade in Nepali sports ended with a lot of ups and downs, but certainly the 51... Read More...