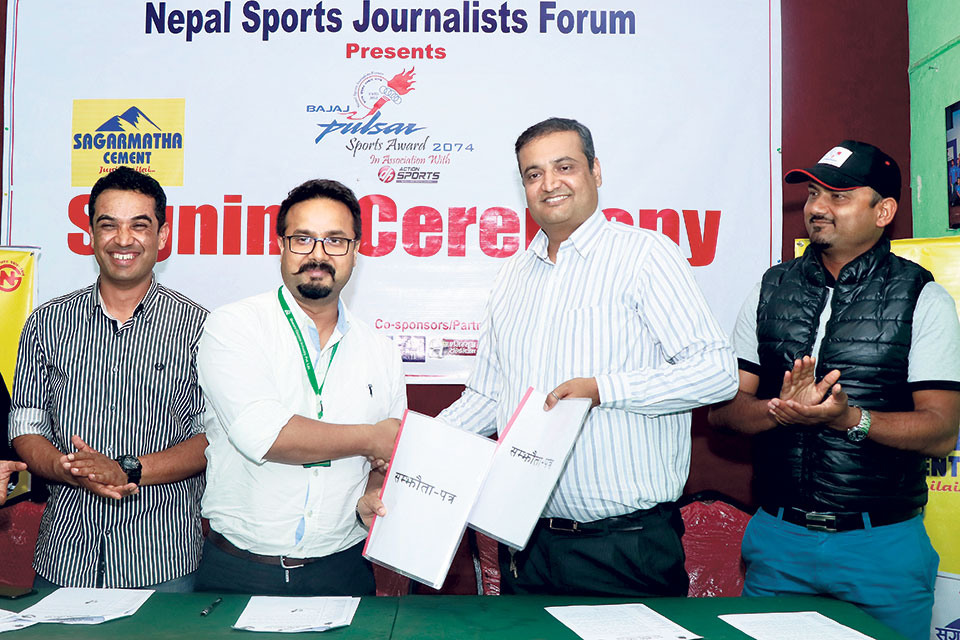 At a ceremony organized in the capital on Sunday, the forum signed the deal with the company and also signed a co-sponsorship deal with the Sagarmatha Cements. According to the deal, the forum will receive Rs 200,000 every year.

The president of the forum Mahesh Acharya and Ghorahi’s market promoter Pratik Adhikari signed on the agreement paper.

The forum said that even though the deal was signed only for a year, they believed that they will continue the partnership with the company for a longer period.

This edition of the awards will be held at the Army Officer’s Club in Bhadrakali on May 17. It is an auspicious award ceremony organized every year to help the players, the coaches, the sports officials and the organizations who have contributed to sports in 2017 to help Nepal be known in the international arena.

The forum will award the players, coaches and sports officials in eight different categories among which the People’s Choice Category has already been unveiled which consists of five players for this year.

The award ceremony was started in 2003, while the 2015 edition of the awards was not possible because of the devastating earthquake.

KATHMANDU, May 5: The Nepal Sports Journalist Forum (NSJF) and Sahas Sports have signed a one-year extension deal for the... Read More...

LEICESTER, Aug 25: Danny Drinkwater has become the latest Leicester player to commit his future to the English champions. ... Read More...