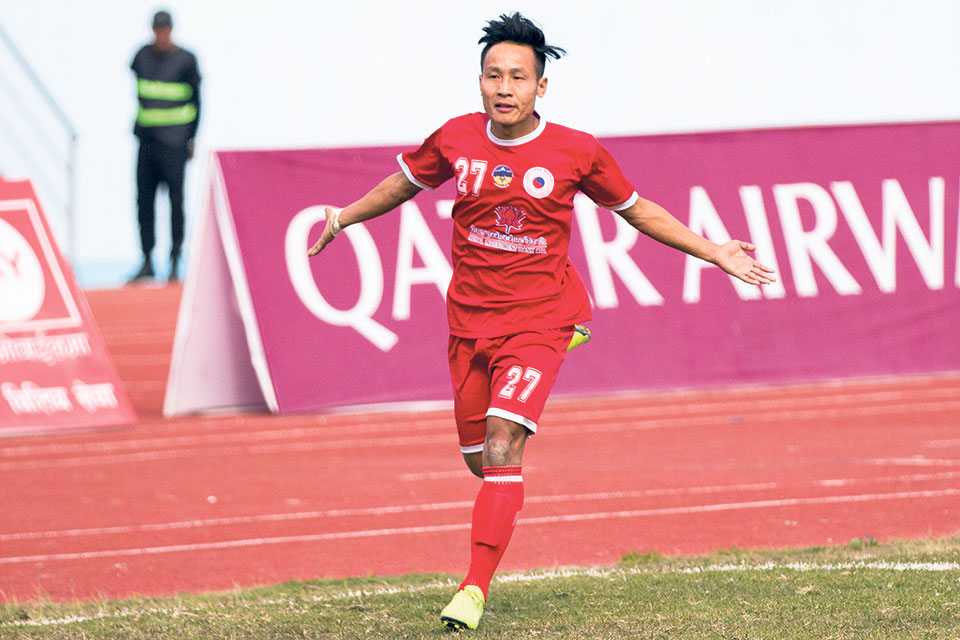 NRT has now become successful to avoid a defeat since its 1-0 loss to second-placed Machhindra Club in its fourth match on December 30. It is only the second team Manang Marshyangdi Club to not concede a single goal against leader Tribhuvan Army Club, however, it faced 1-0 losses against Machhindra and Sankata Club.

KATHMANDU, Jan 31: New Road Team (NRT) registered its fifth win of the season as it moved to the fourth place after a convincing 2-0 win over Brigade Boys Club in the ongoing Martyr’s Memorial A-Division League in Kathmandu on Thursday.

NRT has now become successful to avoid a defeat since its 1-0 loss to second-placed Machhindra Club in its fourth match on December 30. It has won three times afer that, drawn twice and lost twice.

It is only the second team Manang Marshyangdi Club to not concede a single goal against leader Tribhuvan Army Club, however, it faced 1-0 losses against Machhindra and Sankata Club.

Brigade was again short in finishing despite having most of the ball and taking more shots, however, NRT was the most clinical between the two as it had seven out of 12 shots on target to Brigade’s four out of 14.

The losing team got the first chance of the game through a dissapointing Anil Gurung, who still has not scored a single goal this season, got a header from inside the box from a Randip Paudel cross, but was saved by NRT goalkeeper Ajit Prajapati in the 12th minute.

Brigade got another opportunity three minutes later as a shot from Bijay Gurung from a tight angle inside the left hand-side of the box was again saved by Prajapati.

NRT finally got a telling chance to score as Jordan JR Ndemba Owona hit a shot from outside the box, but Brigade keeper Bishal Sunar in the 23rd minute.

Brigade’s Anil Gurung had another try on goal as his shot from outside the box grazed over the crossbar two minutes later.

Pariyar had replaced Krishan Kumar in the 22nd minute, and made immediate impact just 10 minutes later as he converted the pass from Darshan Gurung to draw the first blood in the game.

NRT then started to pressurize Brigade with constant attack from the flanks, and prioritized high press keeping the attackers on bay. The few chances the opponent got were either cleared by the defense or they were hit on counter attack.

Ndemba got a chance to double the lead in the 38th minute, but his shot from inside the box hit the sidenetting. It got yet another chance in the 43rd minute, but Shyam Babu's shot was saved by BBC keeper Sunar, while the rebound from Babu went wide again.

NRT doubled its lead in the 52nd minute through Pariyar again as he got a pass from Babu, controlled the ball very well and took a shot from inside the box. The goalkeeper had no chance to even get a hand to the ball.

Brigade even got a penalty in the 63rd minute, but Anil Gurung’s poor run of form continued as his shot to the bottom left corner was saved by Prajapati after a superb dive.

Pariyar was then substituted in the 66th minute as he only played a total of 44 minutes plus two minutes of first half additional time, but his impact in the game was enough for NRT to bag a crucial win.

NRT got a free-kick chance, but the ball hit the side-bar. The follow-up opportunity came to Darshan, but his shot went too far wide in the 67th minute.

Anil had another chance to redeem himself for his penalty miss, but his shot from just outside the box in the 72nd minute went wide.

Ndemba missed yet another chance in the 76th minute for NRT as his gazing header was brilliantly saved by Sunar.

Both the teams could not score after that, and the game went to NRT’s favor as the team cruised toward yet another postive result.

With the win, it is in the fourth place with 15 points, one ahead of both Three Star Club and Police, which includes five wins, two draws and two losses. Two of its points were deducted after finishing bottom last season. Likewise, Brigade is just four points off relegation in the 11th place with eight points as it won two matches, drew two and lost five.

In the other match of the day, Friends Club registered its third win of the season beating Chyasal Youth Club 1-0 as Uttam Rai scored in the 84th minute.

With the win, it has moved seven points ahead of relegation battler Saraswati as it has 11 points. It has won thrice, drawn twice and lost four games so far.

Likewise, Chyasal, despite presenting a pre-season contention for the top six places, lies in the 10th place with two wins, three draws and four losses. It has nine points and is just five points off the bottom.

Remembering Osho on his Mahaparinirvana Day
15 hours ago

Himalaya Airlines carries out test flight to Lhasa
12 hours ago

India vaccine developer warns some to avoid shot
11 hours ago

Himalaya Airlines carries out test flight to Lhasa
12 hours ago

Remembering Osho on his Mahaparinirvana Day
15 hours ago