NRNA to provide Rs 100,000 each to families of Kabul victims 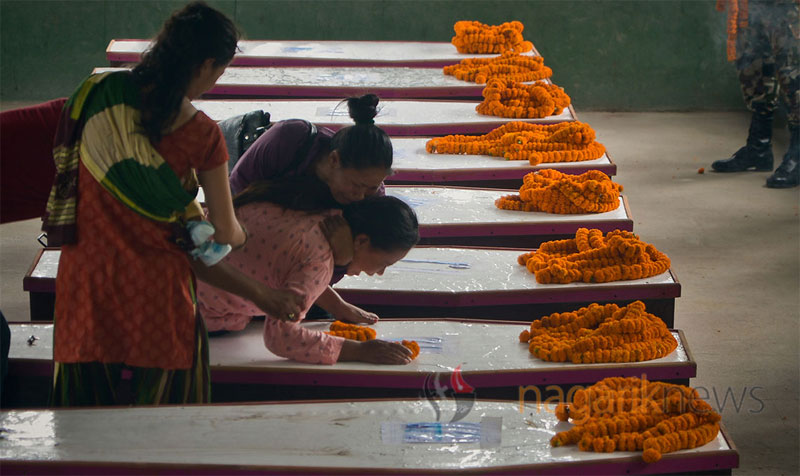 Sanchita Thapa of Butwal breaks down while paying tribute to her husband arrived in coffin from Kabul at TIA on Wednesday. (Bijaya Gajmer/Republica)

LONDON, June 23: The Non-Resident Nepali Association (NRNA) has decided to provide Rs 100,000 each to the families of the Nepali security guards killed in the Taliban suicide bomb attack in the Afghan capital city Kabul.

The relief assistance will be provided through the Benevolence and Humanitarian Assistance Committee under the NRN International Coordination Council.

“Our Nepali brothers who had gone to Afghanistan to make a living have arrived in coffins. At the initial phase, we have decided to provide Rs 100,000 each to the families of the bomb attack victims,” said Pant.

The entire Nepali migrants working in the foreign countries for livelihood have been stunned and grieved by the terrorist bomb attack in Kabul, NRN Chairman Shesh Ghale said in a condolence message.

As many as 15 people including 13 Nepalis were perished in the suicide bomb attack in the Afghan city Kabul on Monday morning.

The government has already handed over the bodies of the deceased to the concerned families.

UML to provide Rs 25,000 each to disaster victims' families

KATHMANDU, July 29: The CPN (UML) has decided to provide financial assistance to the families of those who lost their... Read More...

KATHMANDU, August 13: The Federation of Nepalese Chambers of Commerce and Industry (FNCCI) and the Non-Resident Nepali Association (NRNA) have set... Read More...

Indian Foreign Secretary arrives in Kathmandu (with video)
20 hours ago

Nepal sees 12.6 percent rise in remittance inflows in the first quarter
22 hours ago

Vitamin 'A' being administered to over 2.71 million kids Thursday and Friday
54 minutes ago

WEATHER ALERT: Westerly wind likely to cause light snowfall in hilly and mountainous area
19 hours ago