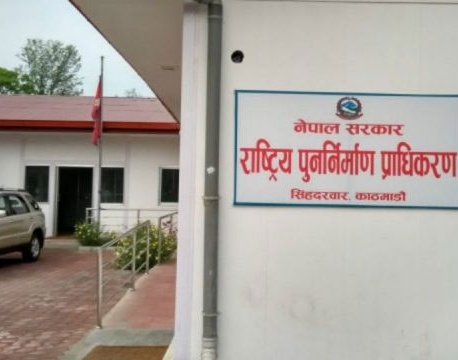 RAMECHHAP, June 26: The technical team from the National Reconstruction Authority (NRA) currently deployed in Dimipokhari of Sunapati Rural Municipality-2 has halted work after one of the engineers was thrashed by the ward chief.

Following the incident, all technicians halted work from Monday demanding justice for Khadka. Organizing a press conference in the district headquarters Manthali on Monday, the technicians warned of boycotting the reconstruction in the entire district if legal action is not taken against the ward chief.

Khadka was having his dinner at a local hotel when KC slapped him, accusing him of misusing the ward office's letterhead. Ward Chief KC has admitted that he slapped Khadka.He says he first tried to tell Khadka that he had no right to use the ward's official letterhead to publish a notice but the engineer kept arguing with him, "provoking him to raise his hand."

He claimed that Khadka had breached the law which compelled him to take the "action". Speaking at the press conference, engineer Khadka claimed that this was not the first time ward chief KC had mistreated him. He said in his three years working period, KC has repeatedly misbehaved with him.

After gathering in Manthali, the technicians reported the incident to the Chief District Officer (CDO) Lila Kumari KC and also handed her a memorandum. They have demanded stern action against the culprit. The memorandum submitted by NRA's technical team in Ramechhap has clearly warned of boycotting the reconstruction work across the district if KC is not punished.

KATHMANDU, March 31: The National Reconstruction Authority (NRA) has started deploying engineers - a total of 550 of them- for the... Read More...