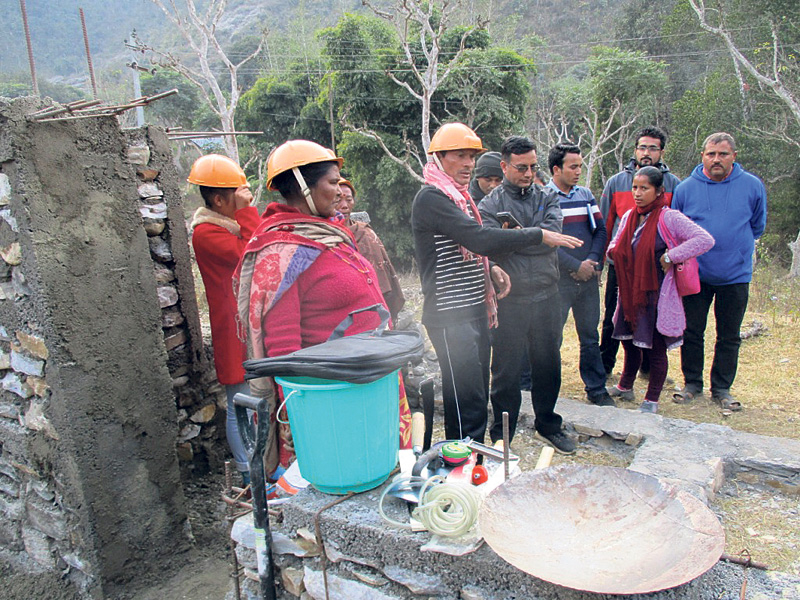 Experts term the plan unnecessary and a populist program
KATHMANDU, Jan 31: At a time when around 2,600 engineers and technical staff deployed by the government have been forced to stay idle due to sluggish progress in reconstruction of private buildings in the 14 earthquake-affected districts, the National Reconstruction Authority (NRA) is making preparations to deploy around 3,500 final year civil engineering students as volunteers for 'facilitating the victims in constructing earthquake resilient houses'.

The NRA has decided to provide each of the final year engineering students a sum of Rs 15,000 to Rs 18,000 as monthly allowance apart from two-way bus fare and insurance coverage. NRA officials have said that the NRA has decided to provide the allowance to the students in line with the National Volunteering Program of the National Planning Commission.

"Pokhara University has agreed to provide around 1,000 volunteers to the authority in the first phase. Similarly, other universities have also agreed to provide their final year engineering students," informed Pokharel.

The NRA officials said that the NRA plans to deploy around 3,500 such students in the districts for a month starting from mid-February. Following the meetings with the officials of the universities, the NRA on Monday also sent a formal letter to the Office of the Dean under Faculty of Science and Technology of Pokhara University to allow the final year civil engineering students to be a part of the authority's volunteer mobilization program. The letter has stated that the authority will provide a week-long training to the visiting final year students and deploy them in villages of the earthquake-hit districts for raising awareness among locals for construction of earthquake-resilient buildings.

"Each of the students will pay a door-to-door visit and inform locals about the components to be considered for constructing earthquake-resilient houses. Similarly, they will also oversee construction works and assist local masons to build earthquake-resilient buildings," said Yam Lal Bhusal, spokesperson of the NRA. He said that the NRA is still working on the to-do-list for the volunteers who will be in the district for three weeks.

According to Pokharel, the students from other universities will also be gradually deployed.

However, experts and engineers deployed by the government in the districts to facilitate the reconstruction works have said that the move to deploy the engineering students is nothing but a populist program. They also deemed the move as unnecessary.

Kapil Regmi, an engineer deployed in a village in Nuwakot district, said, "While reconstruction works are largely affected in lack of construction workers on the ground, deploying volunteers does not make any sense."

He suggested to the NRA to train locals as masons by providing incentives instead of 'spending large amount of money unnecessarily'. He said that the engineers deployed by the government and various non-governmental organizations are already carrying out door-to-door campaign to raise awareness among locals for construction of earthquake-resilient buildings.

Only 5,000 masons have been trained in the last one year when at least 200,000 trained masons are required for constructing around 500,000 damaged houses in the 14 quake-hit districts.

Similarly, an engineering professor and also policy analyst who did not want to be named also termed the move as 'a popularity stunt'.

"Deploying engineers will be both waste of time and money. The NRA can use the allowance money to as incentives to attract locals for mason training and expedite the reconstruction works," he added.

At least Rs 63 million is going to be spent on the monthly allowance and other expenses for the volunteers considering the announcement made by the NRA.