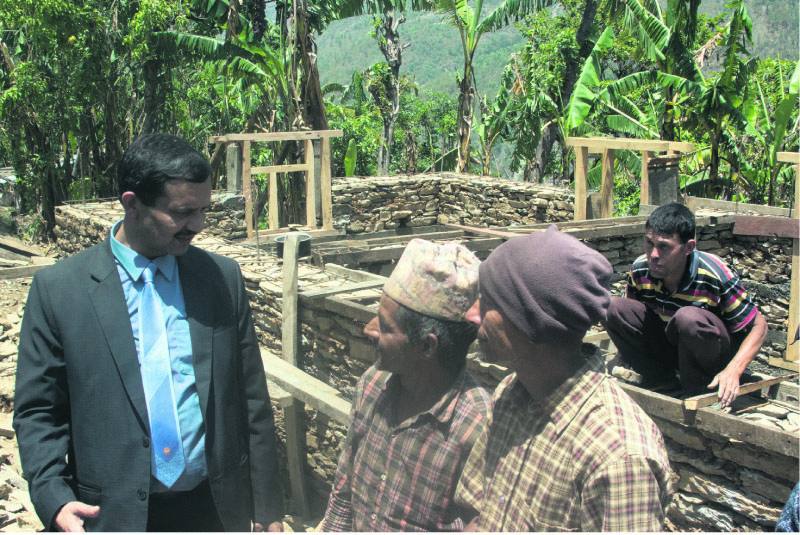 When Pokharel reached Charikot, locals led by Dil Bahadur Shiwakoti were building a house. They were mixing cement and building the foundations for a two-room house as per the guidelines of NRA. Shiwakoti"s three-storey house was destroyed by the earthquake.

“I chose to spend some time with the villagers and recall the tragic day  of April 25, 2015,” said Pokharel.

With the masonry training supported by NRA, Siwakoti feels his house will be stronger and safer. He said he would ask neighbors to follow NRA criteria while carrying out their own rebuilding.

In Lamidanda, 429 of the houses have been rebuilt but 120 of them were found to be not following the criteria. Pokharel said some corrective measures could be taken to make the houses safer.

Similarly, Om Prasad Pathak said that houses built by trained masons would be stronger. In the past, the walls were built using mud and wood shavings but now rods and timber are being used. CEO Pokharel requested the locals to share the knowledge they gained during the training with family and friends.

To mark the earthquake anniversary, CEO Pokharel distributed the second tranche of the housing grant worth Rs 16 million to 105 quake victims, including 70 from Bulung and 35 from Bigu Rural Municipality.

During an interaction with Pokharel, locals said that geographical circumstances and lack of human resources have slowed down the reconstruction.

Niroj Tamag, a 21-year-old who returned from Malaysia, took the masonry training. He said the training has made him hopeful of employment in Nepal. He now earns Rs 1,500 a day and wishes to build a stronger house for his family.