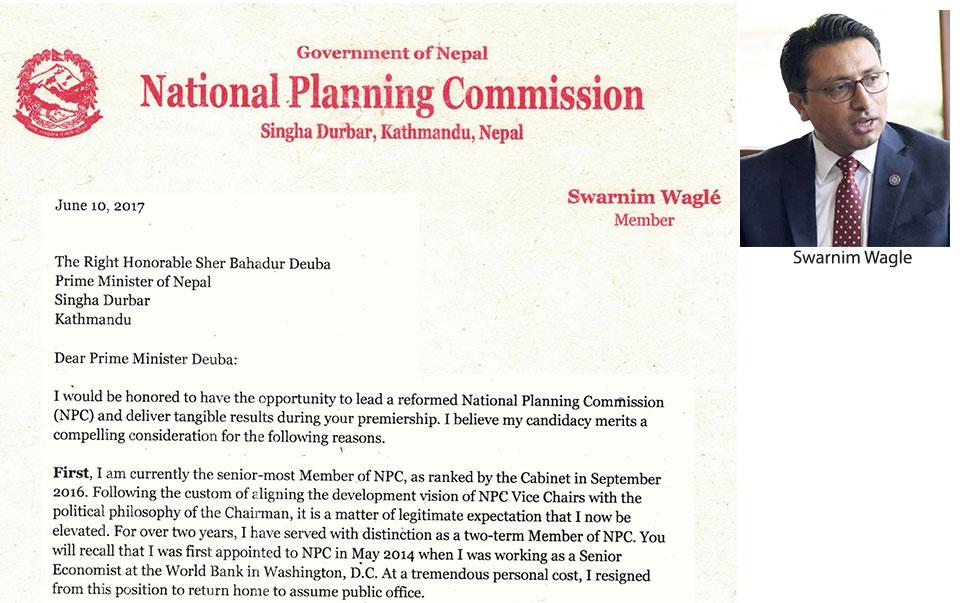 The letter Waglé’s wrote to the then prime minister, Deuba, on June 10, 2017, staking claim to NPC vice-chair position.

KATHMANDU, Feb 19: National Planning Commission Vice-Chairman Swarnim Waglé has stepped down after serving for six months in the apex advisory body, which is responsible for formulating a national vision, periodic plans and policies for development. Waglé, who was appointed to the post in August last year by the Nepali Congress-led government, tendered his resignation to the new prime minister, KP Oli, on Sunday.

"I want to brief the prime minister on NPC's accomplishments during my stint, and request him to give continuity to the good works," Waglé told a press conference organized before submitting the resignation.

Among more than three-dozen accomplishments that he claimed to have achieved during his stint, kickstarting the process to reform the NPC features as one of the major work, according to Waglé.

Among more than three-dozen accomplishments that he claimed to have achieved during his stint, kickstarting the process to reform the NPC features as one of the major work, according to Waglé. "Gathan Tatha Karya Sanchalan Aadesh for a reformed 'National Policy and Planning Commission' has been drafted and submitted to the cabinet," said Waglé, addressing the press conference. "However, the new government is free to decide on whether to effect reforms in the NPC as envisioned in that document or retain the institution in the existing structure," he added.

He also said that his focus during his stint at the NPC was in line with the priorities that he had set out in his letter to the then Prime Minister Sher Bahadur Deuba. In the letter dated June 10 last year, he had outlined the reasons why his candidacy for the NPC Vice-Chairman merits consideration. In his letter he had set his priorities on eight key tasks including an 'NPC overhaul, development vision, economic reform and infrastructure push'. The other tasks that he had promised to pursue were related to operationalizing cooperative federalism, giving prominence to 'evidence-based policymaking', leading and representing Nepal in the international stage on core development issues such as Sustainable Development Goals (SDG) implementation and taking strategic initiatives like drafting white papers and policy responses on issues of national importance like trade deficit and social security.

"I feel that I have fulfilled my promises made to the prime minister although my tenure was short," he told the press conference. His accomplishments range from the long-term policy departure like reforming the NPC to the symbolic act like procuring first electric vehicle for NPC use with the government's own resources.

According to Waglé, revamping the national development volunteer service by regulating the  process of recruitment and selection of volunteers, preparing the draft of 'Vision 2030' for long-term development and preparing and presenting the official country position on the graduation from Least Development Country (LDC) status at the UN are some of other major works carried out in last six months at the NPC.

Another important work that he cited as his accomplishment was about preparing the formula for equalization grant for the current fiscal year 2017/18 and handing the formula over to the fiscal commission.

Meanwhile, Waglé as the vice-chairman of the NPC, released the 'Sustainable Development Goals, Status and Roadmap: 2016-2030' which not only highlights the major issues and challenges that the country faces in its pursuit of the SDGs, but develops a monitoring framework that is aligned and updated with national SGSs for tracking the progress. 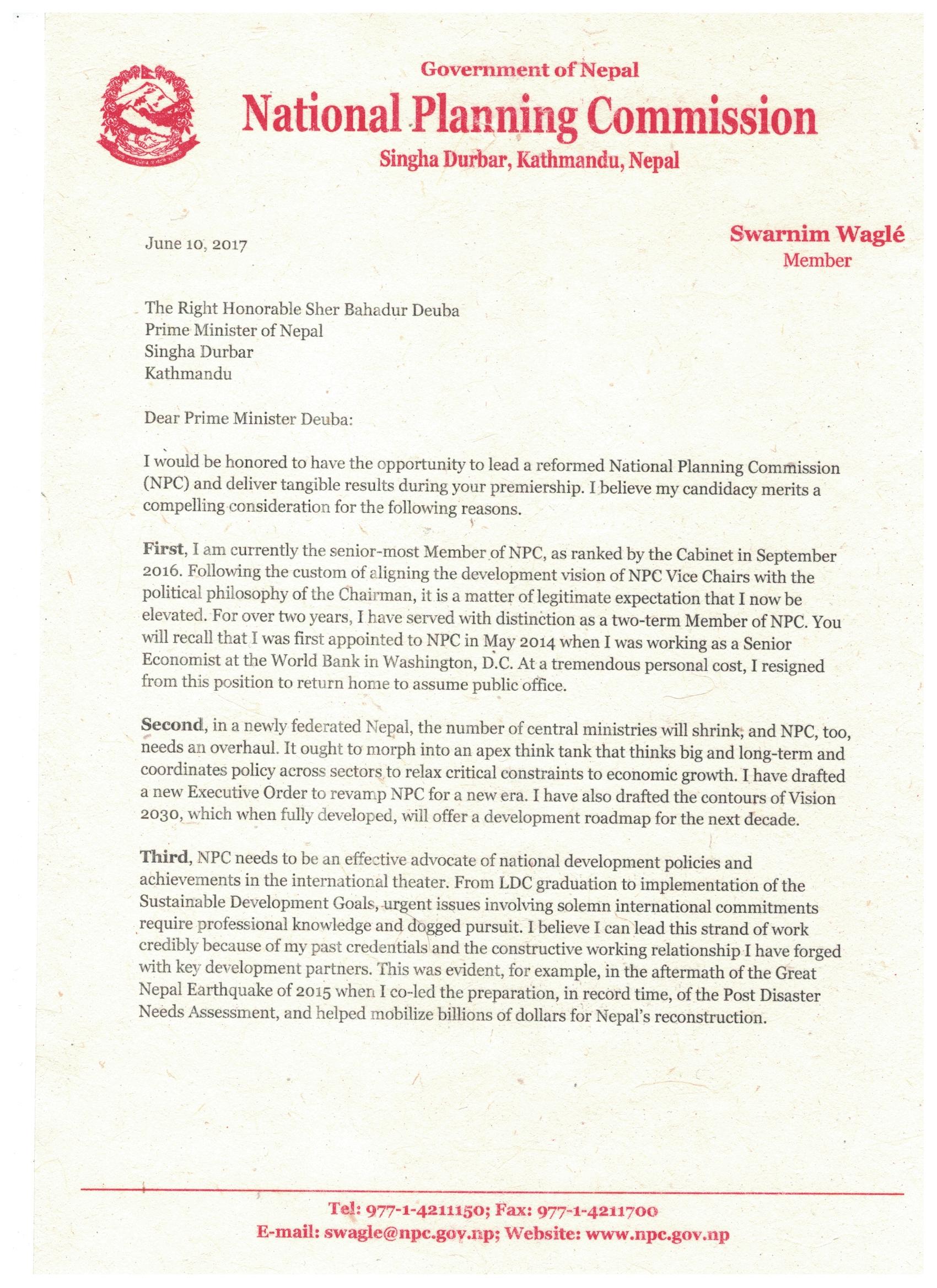