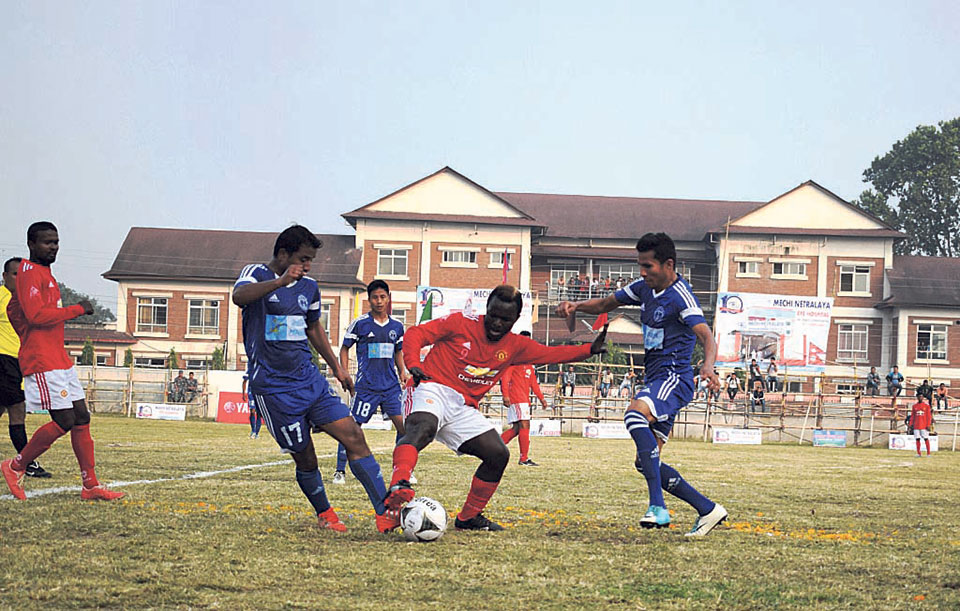 The departmental side thrashed Indian side Subash Chandra Boys Club (SCBC) 4-0 in the tournament’s opener to secure its berth in the last four.

Tirtha Rana scored a brace while Bhola Silwal and Tej Tamang netted one goal each for NPC in the match played at Kakarbhitta Secondary School’s ground.

NPC’s head coach Kumar Katwal praised his players’ performance after the impressive win over the visiting team from Kolkata.

“The combination of players was very good so we completely dominated the match. The opponent wasn’t that strong and didn’t throw strong competition,” said head coach Katwal.

NPC and SCBC were given direct entry to the quarterfinal of the tournament.

Now NPC could face departmental rival Tribhuvan Army Club (TAC) which will take on the winner between Jhapa XI and Far-western XI in the quarterfinal on Sunday.

After SCBC’s defender Bikash Mandi failed to clear a  cross from Ajit Bhandari , Rana collected the ball in the danger zone and made an easy finish to give his side a 2-0 lead inside 20 minutes.
Bhola Silwal made it 3-0 in the 24th minute utilizing a pass from Ram Wajee. Second-half substitute Tej Tamang netted NPC’s final goal in the 79th minute.

Tamang, who replaced skipper Jumanu Rai, collected a rebound following a shot from Ravi Paswan and slammed it from close range to ensure his side’s big-margin win.

The visitors had some chances to produce goals but failed to do so due to poor conversion. Jabin Aashas missed a big opportunity to score in the 23rd minute for SCBC as his feeble shot from the danger zone was easily collected by NPC goalie Roshan Khadka.

SCBC had a couple of chances to score in the second half. In the 56th minute, Kausik Dev’s powerful shot sailed over the goalpost where as Sashikant Sur’s effort was denied by NPC goalkeeper Khadka four minutes later.

Gearing up to launch novel 'Rani'
7 hours ago