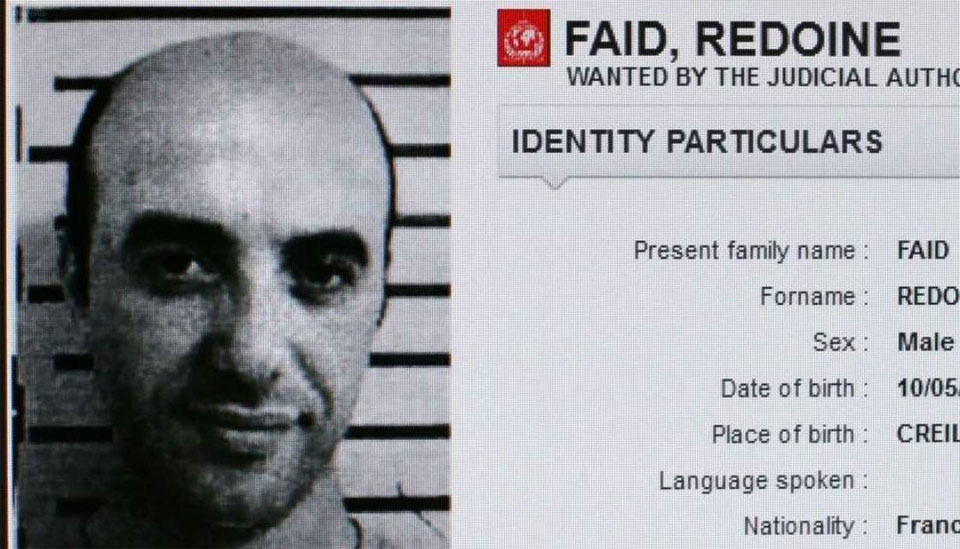 In a scene straight from the movies, notorious gangster Redoine Faid has escaped from a Paris prison by helicopter. Photo credit: Interpol

July 2: In a scene straight from the movies, notorious gangster Redoine Faid has escaped from a Paris prison by helicopter.

A group of heavily armed men created a diversion at the prison entrance while the helicopter landed in the courtyard.

The 46-year-old had been serving a 25-year sentence for a failed robbery during which a police officer was killed.

The armed men showed up at the prison around 11:20am on Sunday (local time).

They grabbed Faid from the visitors room where he was speaking with his brother and took him to the stolen helicopter.

After helicopter landed, Faid was transferred to a car which was then seen heading for the motorway.

That car was later found burned at a shopping centre carpark.

A police search is under way across the entire Paris region.

An interior minister official said everything is being done to locate the fugitive.

This is not Faid's first successful prison break. In 2013, he took four guards as human shields and exploded several prison doors with dynamite in an escape staged less than half an hour after he arrived at the prison. He spent six weeks on the run.

In the 1990s, Faid ran a Paris gang involved in armed robbery and extortion. He has said his lifestyle is inspired by Hollywood gangster films, including the Al Pacino thrillerScarface.

He once approached Michael Mann, director of 1995 heist film Heat, and told him he was his technical advisor.

ICUs in Valley overwhelmed, patients are flying out to other cities
9 hours ago

Corona-infected lawmakers, too, can cast their votes as PM Oli seeks vote of confidence in parliament tomorrow
2 hours ago