Notes from the STREETS 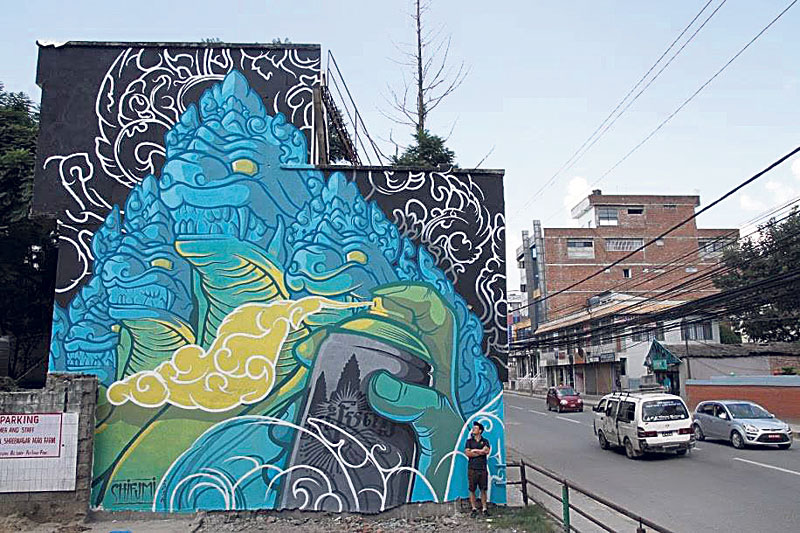 KATHMANDU, Sept 9: One of the best ways to help the society realize and truly appreciate the value of art is to make it accessible and currently, with ArtLab’s initiation, Prasad Project is doing just that. Their ongoing street art festival is bringing the art and the exhibition to the public and their streets.

The intention is to encourage the idea of creating open galleries in Nepal. Simultaneously, their other main purpose is to introduce local heroes to inspire and motivate youths to bring positive change in our societies. The artists have already begun sharing different forms of street art techniques, both traditional and contemporary, to earnestly help kick off the urban art revolution in our country.

The Prasad street art festival is scheduled to go on till the end of September. Amidst their various activities and programs, The Week caught up with the organizers to hear about their progress so far.

How has is it been to organize a street art festival of this scale?
We actually organized the festival in two months. It’s been hectic but it’s proving to be absolutely worth it. We are funded by Center for Culture and Development, a Danish body. We were funded from 2013 so we got an opportunity to travel around six cities in Nepal hosting workshops on urban art. So after teaching artists and enthusiasts around the country, now is the time to show them what street art is really about. We taught them in a basic scale but now we get to demonstrate urban art’s full potential.
There are a total 25 artists participating in this festival. We initially contacted all the Nepali street artists, then those who had participated in our capacity development workshops. Once the local artists were decided on, we got on with inviting international artists. So we basically have people from Birgunj, Pokhara, Dharan to Belgium, France, Japan and so on. We can’t pay all these artists a lot but we are taking care of their accommodations, food, and transport. This includes those coming from outside the valley.

Are there any sorts of challenges?
The objective here is to learn. Urban art is in its initial stage in Nepal and we don’t have many resources. Perhaps, lack of proper tools and equipments is our biggest challenge. For instance, we would love to make art that is 20-storey-tall but we don’t have lift cars here in our country. We are forced to limit ourselves for the moment. We can’t be over ambitious. Similarly, primary tools like spray cans are so expensive. We can’t get a good one here and one that we ordered from Bangkok cost Rs 1200-1300. Nevertheless, since it is crucial, we bought tons for this festival. We are looking into possible deals to figure out a long term solution.

Why was there a need to have a street art festival?
We thought it was necessary for the urban artists of Nepal to get that exposure in the international level and, at the same time, connect with artists from not only different parts of the world but also different cities in our country. In this way, we can learn. We can grow together. The young artists can be motivated to create more art in the public space and organize exhibitions that are different from the mainstream exhibitions.
For example, at the moment, we are painting the walls of Bal Mandir. We plan to turn this into an alternative space to showcase our work. We want to show the young urban artists as well as the public that all this is possible. There really is no limit. From the grounds, to the buildings or metal poles, anything can be turned into a canvas. We are hoping this festival will set a bench mark and show them all of this and more.

Kiran Maharjan, Artist
Responsible for the creative aspects of the festival

What sort of creative direction do you want this festival to take?
I really want people to explore this medium of art. I don’t want people to just look at my work or somebody else’s work and want to do something similar. I want people to find their own thing. I’m also sort of in the process of figuring my thing out so I want to use art to encourage people to explore and discover their own attitude, particular style and statements. As far as the festival is concerned, we are promoting the idea that it is possible to do things in our country itself. It nicely comes together with the philosophy of street art as it embodies the DIY attitude. We make our own tools, develop our own techniques, so the Prasad Project is all about being creative with your problems. It’s the sort of concept and theme that shall be reflected in our work as well.

What are your thoughts on the innovation and creativity in Nepal’s urban art scene?
Art is scene because it is mainly limited to Kathmandu. The urban art is even smaller. There are only a handful of people who are doing it. We do have some really skilled artists who are showing a lot of grit to carry on with their work in their local areas. As it is, this can be a challenging art form to pursue because you are often working on a big surface that you can’t manipulate. It certainly takes dedication. Still a lot of young people, who are already art enthusiasts, are also really passionate about urban art as well. After all, this is recognized as a movement of the youth, an art form of the youth. So it is natural that they are attracted to it. Hopefully, we can keep the momentum going and grow in the future.

What kind of reception did you get when you traveled outside the valley with your urban art workshops?
I’d say the vibe out there was better than in Kathmandu. Though I’m not speaking in terms of art work, it was more about their enthusiasm. It’s true street art hasn’t been able to spread out of the capital. There aren’t any examples of urban art in their city which is why we actually felt it was more valuable to do some work there. When we were in Beni making a four storey art work, the people were so shocked. They couldn’t believe that there was this form of art. Often art is interpreted as something that is limited to a pen and paper but these works helped them open their minds. They were so inquisitive about it all. In Tansen, we even had a 57-year-old and a 48-year-old attend our workshop. They used to paint the traditional sign boards but they came to learn stencil work.
Such things, give us immense satisfaction. We want to take street art in an ethical way and help it become a medium of expression. The positivity energy around its introduction outside Kathmandu was just fantastic.

As seen on the streets

KATHMANDU: Thousands of people walk on the streets, be it at the roads of New Road or the banks of... Read More...

Two killed in bus-motorcycle head on collision
7 hours ago