Not without India: World's pharmacy gears up for vaccine race 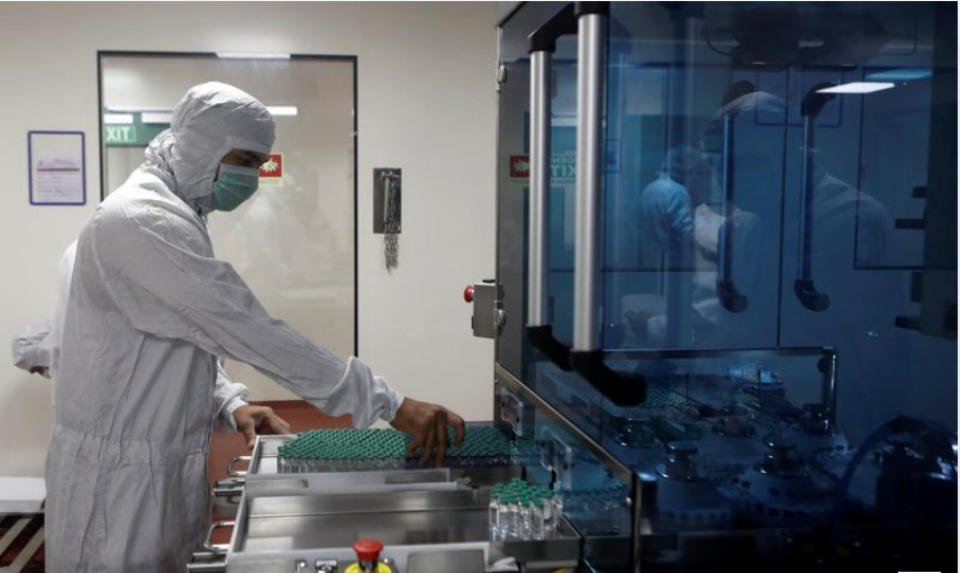 PUNE, India/NEW DELHI, Dec 11: India, the world’s biggest vaccine maker, is getting set for the massive global blitz to contain the coronavirus pandemic with its pharmaceutical industry and partners freeing up capacity and accelerating investments even without firm purchase orders.

India manufactures more than 60% of all vaccines sold across the globe, and while its $40 billion pharmaceutical sector is not yet involved in the production of the expensive Pfizer Inc and Moderna shots, the nation will play a pivotal role in immunizing much of the world.

Indian companies are set to produce eight, more affordable vaccines designed to fight COVID-19, including AstraZeneca's Covishield, called the "vaccine for the world here" by its developers.

“There are many vaccines being produced in countries around the world but there’s only one nation that has the manufacturing capacity to produce sufficient quantities to satisfy the demands of citizens in every country, and that’s India,” said Australia’s ambassador to India, Barry O’Farrell, after touring vaccine manufacturing sites in India with many other diplomats.

Serum Institute of India (SII), the world’s biggest vaccine maker, has already stockpiled more than 50 million doses of the AstraZeneca shot, even as it awaits emergency-use approvals from both British and Indian authorities.

SII plans to make a total of 400 million doses of Covishield by July and is setting up new production lines to roll out roughly one billion shots a year.

Pharmaceutical packager Schott Kaisha, meanwhile, is stepping up production of vaccine vials and Deutsche Post’s DHL is working out how best to distribute the shots within the country and around the world.

“Because of the large volumes coming out of India and of course the affordable vaccines, there is no other country that will contribute more towards ending the pandemic than India,” SII CEO Adar Poonawalla told Reuters at the company’s sprawling campus in the western city of Pune. Here, automated machines fill and seal thousands of vials with the AstraZeneca shot every hour before they are moved to a vast, high-ceiling cold room.

But much of India’s vaccine production could be, at least initially, for domestic use.

With nearly 10 million infections, the world’s second-highest after the United States, India’s government is likely to order a huge chunk of the vaccines for its 1.3 billion people.

Prime Minister Narendra Modi has yet to specify how much India will require, but his government has said some vaccines may be approved in the next few weeks and that it was “committed to partnering with all interested countries in vaccine-related efforts”.

Poonawalla said he expects to sell hundreds of millions of doses at home. Even as immediate local demand is met, nearly half of its production would go overseas, the company has said.

India’s Bharat Biotech, which has also sought emergency approval for its government-backed vaccine candidate, is in discussions with more than 10 countries in South America, Asia and Eastern Europe to sell its product.

Russia, meanwhile, has signed deals with Indian companies to make the country the production and export hub for its Sputnik V vaccine, starting with more than 100 million doses a year.

Many companies in India’s vaccine supply chain are laying out investments without deals in hand.

“We’ve taken a calculated risk,” said Rishad Dadachanji, a director at Schott Kaisha that is in supply talks with around 10 vaccine makers at home and abroad.

It is increasing its annual manufacturing capacity by 300 million to 1.5 billion vials by November.

Executives at rival firms SGD Pharma India and Piramal Glass said they were expanding their production base, or re-allocating manufacturing lines to focus on vials.

SGD plans to add 100 million units to its current capacity of 350 million glass vials, while Piramal says it can double its specialised vial capacity at just a month’s notice “to meet any unforeseen demand.”

Others that are likely to benefit from an expected surge in demand are: pharmaceutical firms Dr Reddy’s Laboratories, Cadila Healthcare and Hetero; logistics company FedEx; cold chain storage specialist Snowman Logistics and Hindustan Syringes & Medical Devices, among others.

Hindustan Syringes says it will increase capacity by 42% to 1 billion units by the first half of next year. It has already shipped some 140 million syringes that disable themselves after one use for the global vaccine distribution program COVAX.

But because the Indian government has not yet signed any contracts with vaccine suppliers, some ancillary companies have been left guessing what kind of products they should prepare for as specifications may vary from vaccine to vaccine.

Vial maker SGD’s managing director, Sardar Akshay Singh, warned that a last-minute rush to secure vaccines for India could hit exports - similar to the way officials stalled shipments of masks and sanitizers early in the pandemic to meet local demand.

“We have been feeding the government a lot of information but they’ve not come up with a plan so far,” said Sunil Nair, CEO of India’s biggest cold chain operator, Snowman.

The company’s ongoing expansion will nevertheless double its vaccine handling capacity to 200 million doses by March.

It operates some 500 trucks fitted with containers refrigerated by Carrier Global, has vendors on standby if more are required, and says it can deliver vaccines from production site to inoculation centres within hours thanks to its countrywide reach.

SII, which also has COVID vaccine tie-ups with U.S. biotech firm Codagenix, Novavax and Austria’s Themis, has scaled back production of shots for other diseases and is readying more cold rooms, buying more trucks and hiring more workers.

For DHL, the world’s largest courier and logistics company, vaccine transportation work has already begun in India. It recently brought in Russia’s Sputnik V vaccine for trials and says it will play a crucial role in exporting vaccines, and distributing them within the country.

“The next 12-24 months are going to be significantly exciting and there’s going to be a lot of capacity issues, but I think it’s a positive headache to have,” DHL Express India head R.S. Subramanian said.

India has decided to provide a limited amount of ‘Covishield’ for free within a week, according to Indian media outlets Read More...