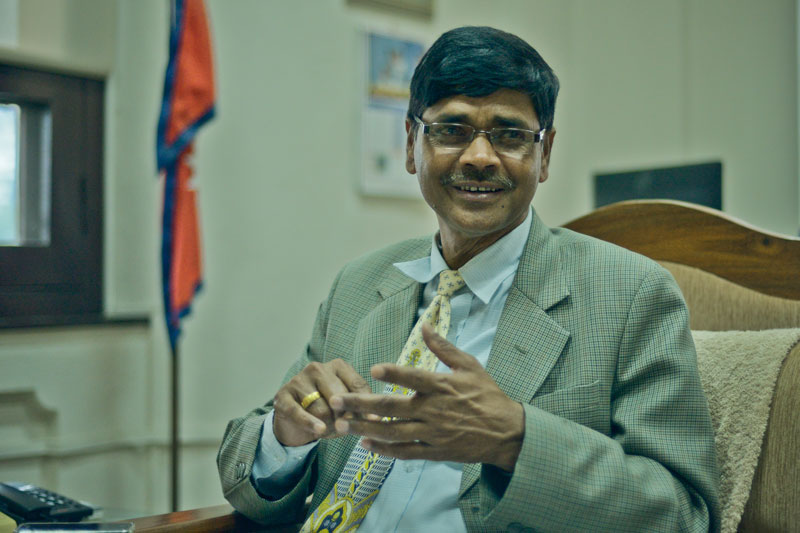 It is only 17 months to the constitutional deadline of January 21, 2018 to hold three levels of election—local, provincial and national. Political parties are divided on the issue. But how prepared is the Election Commission? Chief Election Commissioner Ayodhi Prasad Yadav says all elections are possible within January, 2018.

The constitution mandates that three sets of elections be held before January 21st, 2018.  Is it possible and how is the Election Commission preparing?
After the promulgation of new constitution on September 20th, 2015 the current parliament became an ad hoc legislature. We are aware of the constitutional mandate to hold three elections before January, 2018 and are prepared for it from our side. We need to hold elections of local bodies, provincial parliament, national parliament, the upper house as well as elections of President and Vice-President. Besides, the Election Commission will also have to hold referendums on vital national issues, if need be. All three elections are interlinked. Failure to hold one will have a direct bearing on others. We are aware of this and are preparing accordingly.

Nepali Congress has indicated that elections of local bodies can be held under the existing set up. Can we do that?
If we hold local elections under transitional provisions, we would not need to wait for the final report of ‘Commission for the Determination of the Numbers and Boundaries of Village Bodies, Municipalities and Special, Protected or Autonomous Regions.’ Local Bodies Election Procedures Act (1992) could have been enacted after necessary amendments. After the parliamentary endorsement of this amendment, we could have easily held local polls. We have old geographical boundaries and constituencies to work with. We held local elections based on these basics. We could do so this time as well. But for that to happen we need consensus among political parties.

The proposed federal boundaries have altered the boundaries of many ward and VDC units. How will you address this?
This is why we had told the political parties not to alter ward units while demarcating provincial boundaries. When a ward unit is merged or split between two provinces, the task of collecting and updating voter information becomes tricky. Now the government has expressed its commitment to local elections. Therefore we are fully prepared to hold the elections before January, 2018. The Election Commission is also prepared to hold local election sometime in March/April, 2017. If we need to have reelection in some places, we can complete the exercise within the same year. But like I said the parties need to internalize this urgency. They should realize that the failure to hold local polls will affect provincial and national election as well. Local elections will pave the way for provincial election, which in turn will make it easier to hold the election of national parliament. We have time lines for all three elections. And we are committed to sticking to this timeline.

Some parties are of the opinion that three elections can be held together. Is that realistic?
The Election Commission is clear about one thing. All three elections cannot be held at once. We may be able to hold provincial election and election of the national parliament side by side. This will be possible from managerial point of view. But think of it from the perspective of voters as well.  We will have to conduct polls under first-past-the-post as well as proportional representation categories.  So voters will have to choose from various candidates coming various parties. It will be difficult for the voter to hold four different ballot papers and rush from one polling box to other to cast their votes. We have enough time to hold the elections with ease. So let us first hold the local elections. Then let us hold the provincial election and then the one for national parliament.

Has there been any dialogue between the Commission and government concerning the three sets of elections?
We are in constant touch with one another. The Village Council has been granted powers to frame its own laws by the new constitution. This is how the election of the Village Council is closely linked to other elections. We have already forwarded the Act to the government to hold local polls.

When should elections Acts be ready in order to hold local polls by April/May, 2017?
Election Commission has provided a clear timeline to the government. We have prepared Election Act and Voter Regulation Act. We have already drafted the Act for local election and submitted it to the government. They should be passed by the parliament by mid-September. Once the Act is endorsed, the Election Commission will have to draft Election Regulation, directives and procedures. This why it is important to pass the Act first. This will create a basis for us to work further and move forward. We have requested the government to pass the Election Act as early as possible.

What, in your view, are the major challenges to holding the three sets of elections?
The first is garnering minimum political consensus.  Then we will have to draft the election code of conducts and ensure their compliance by candidates. We will have to create conducive environment for the voters to cast their vote in free and fair manner. Another indomitable challenge is our geography and climate. It will be nearly impossible to hold election after mid-November in high hills and mountains because snowfall starts in high altitudes right after this time. We cannot hold elections during monsoon months either.

Besides, we will also have to train human resources and provide voter education. Then there is the difficulty of logistics. But these are secondary issues. The first condition is the political will to conduct elections within the stipulated timeframe. If the parties are willing, other challenges can be overcome.

CPN-UML had recently proposed holding election of national parliament first to avoid a constitutional vacuum. Is it possible?
That’s possible. But the parties need to come together and amend the constitution first.

How do you determine the age threshold to ensure no eligible voter is left behind?
We want to make sure that everyone who is at least 18 years old on the day of election gets to vote. For this we will fix the cutoff date based on the existing list of voters and the lists that are being gathered from across the country. The Election Commission is committed not to deprive even a single voter from their right to vote.

When do you plan to mobilize voter list collectors?
We will have collected voter lists three months before election date. There are cases of people being deprived of their right to vote as they lack citizenship certificates. Therefore we have requested the Ministry of Home Affairs to mobilize citizenship distribution teams along with our team of voter-list collectors. Nobody who is eligible to vote should be barred from voting just because he has not acquired citizenship.

KATHMANDU, Oct 4: The Election Commission (EC) has said that it is not in a position to provide a common... Read More...

US Ambassador Berry returns home; Dean Thompson sworn in as new US Ambassador to Nepal
2 hours ago
Car goes missing after falling into Trishuli
7 hours ago

Body of missing Sherpa found in Manaslu
4 minutes ago