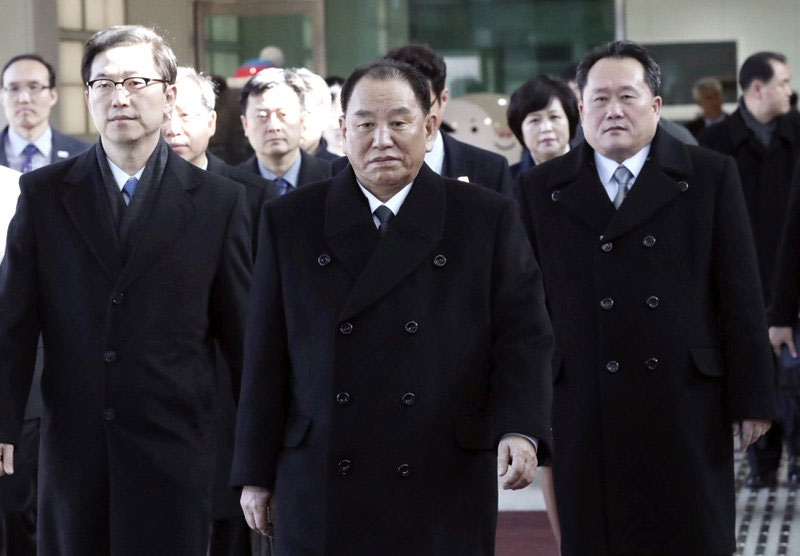 Ivanka Trump, the U.S. president’s daughter and adviser, will also attend the ceremony.

The North’s delegation is headed by Kim Yong Chol, whom Seoul has accused of being behind two attacks on the South that killed 50 people in 2010. Kim was head of the North’s military intelligence when the attacks took place and is currently a vice chairman of the ruling party’s central committee tasked with inter-Korea relations.

With decades of experience, he is one of the most powerful people in the North’s ruling regime. Seoul decided to temporarily take him off of a blacklist to allow the visit.

South Korea is hoping to ease tensions by allowing the North to participate in the games and send senior delegations.

Kim Jong Un’s sister, Kim Yo Jong, attended the opening ceremony in an historic first — no member of the ruling Kim family had ever traveled to the South before. She invited President Moon Jae-in to a summit with her brother in Pyongyang. The delegation to the closing ceremony was expected to follow up on that invitation while in South Korea.

The delegation’s arrival was met by protesters calling for Kim’s arrest for his alleged role in the 2010 attacks — the sinking of the warship Cheonan that killed 46 South Korean sailors and an artillery strike on a South Korean island that killed four people.

Details of the delegation’s itinerary were not immediately available. It was also not clear where the delegation would sit during the ceremony — a significant issue given the events of two weeks ago at the opening.

There, Kim Yo Jong sat in the same VIP box with Moon and U.S. Vice President Mike Pence, creating some awkward moments. Though Pence stood to cheer the entrance of the U.S. team, he remained seated when the athletes from North and South Korea marched together behind a “unification” flag, leaving Moon to instinctively turn around and shake Kim’s sister’s hand.

Pence’s office claimed afterward that the North had pulled out of a planned meeting at the last minute.

South Korea’s Yonhap news agency said the eight-member group now in the South includes the deputy director of the North America desk at the North’s Foreign Ministry, while the U.S. delegation also has members who are well-versed in North Korea issues — sparking speculation that some kind of meeting might again be in the works.

But officials have suggested they have no such plans.

The North’s state-run news agency ran a story Sunday quoting a “spokesman for the Korea Asia-Pacific Peace Committee” as saying that Pence insulted Kim’s sister with his hard-line rhetoric after returning to the U.S. and “we will never have face-to-face talks with them even after 100 years or 200 years.”