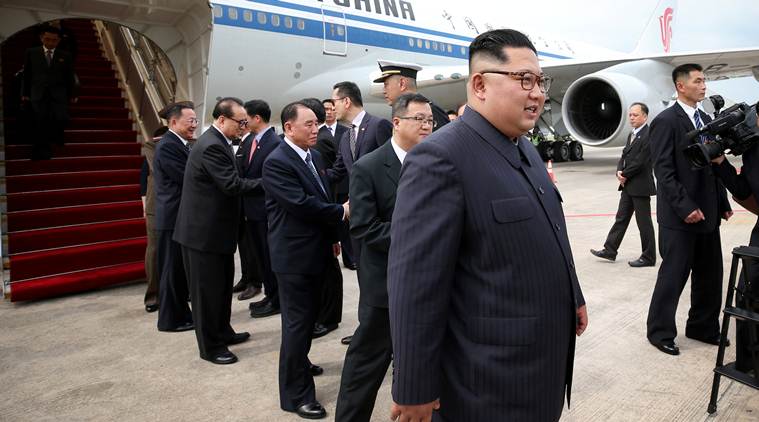 When Trump and Kim meet on the resort island of Sentosa on Tuesday they will be making history even before they start.

Enemies since the 1950-53 Korean War, the leaders of North Korea and the United States have never met previously - or even spoken on the phone. He was greeted by Singapore’s foreign minister, Vivian Balakrishnan, who posted a picture on Twitter of him shaking hands with Kim and the message: “Welcomed Chairman Kim Jong Un, who has just arrived in Singapore.”

A convoy of vehicles that included a stretch Mercedes Benz limousine, identical to vehicles the North’s leader had previously used, came into central Singapore under heavy security.

The U.S. delegation, en route from the G7 meeting in Canada, will arrive Sunday evening, and Trump is set to meet with Singapore’s Prime Minister Lee Hsien Loong on Monday.

Trump is scheduled to arrive at Singapore’s Paya Lebar Airbase at 8:35 p.m. on Sunday and go to the Shangri-La Hotel, according to the White House.

At stake at the summit are North Korea’s nuclear weapons and peace on the Korean Peninsula. North Korea spent decades developing nuclear weapons, culminating in the test of a thermonuclear device in 2017. It also successfully tested missiles that had enough range to reach the U.S. mainland.

The tests came amid a campaign of “maximum pressure,” led by the United States, that tightened economic sanctions against North Korea and raised the possibility of military action.

In a New Year’s address, Kim said his country had completed development of its nuclear program and would focus on economic development, suggesting a meeting with South Korea. After a flurry of contacts between the two Koreas, South Korean officials suggested to Trump in March that Kim would be willing to meet face-to-face.

The summit comes after weeks of sometimes-contentious discussions and was briefly canceled amid North Korean outrage over messaging from some U.S. advisers.

Many remain skeptical Kim will ever completely abandon his nuclear programs. They believe his latest engagement is aimed at getting the United States to ease crippling economic sanctions that have squeezed the impoverished country.

For Trump, a successful summit will see him achieve badly needed recognition on the international stage ahead of congressional elections in November.

Believed to be 34, Kim is one of the youngest heads of state in the world and looks an unlikely candidate to be making history of the kind that has eluded his father and grandfather, both past leaders of North Korea.

But since taking power in 2011 after his father’s death, the youthful Kim has displayed a mixture of ruthlessness, pragmatism and statecraft to get this prize: to sit across the table with the leader of the United States and be treated as an equal.

The two countries were on the brink of war last year, with their leaders trading insults and threats, until Kim made a dramatic offer in March to meet Trump and discuss nuclear disarmament, which the American president quickly accepted.

Kim’s journey from international pariah to being regarded as a responsible head of state has taken just a few months.

The two leaders meet at 9 a.m. (0100 GMT) on Tuesday at the Capella on Sentosa island, a refurbished British Army artillery mess that is now one of Singapore’s most expensive luxury hotels.