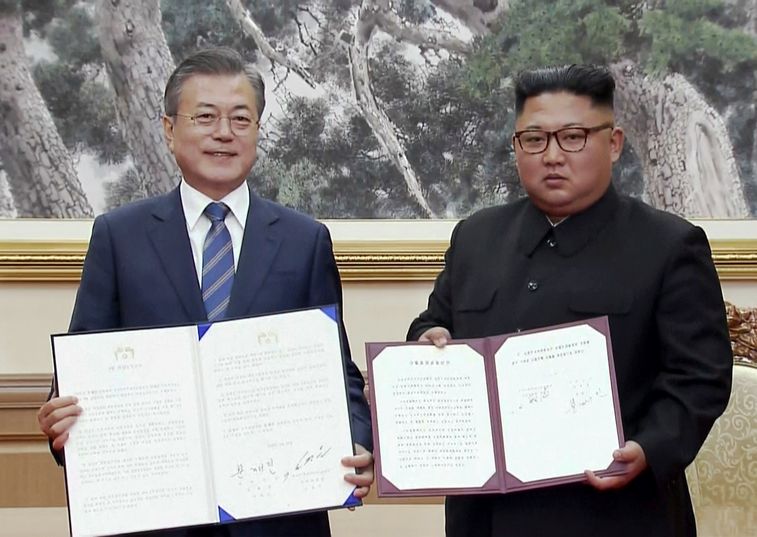 SEOUL, Sept 19: The North and South Korean leaders presented a joint agreement during their summit in Pyongyang on Wednesday that Kim Jong-un said represented a "leap forward" for peace on the peninsula.

At a joint press conference after the signing, South Korea's Moon Jae-in said North Korea had agreed to "permanently" shut down all of its nuclear and missile testing facilities, in the presence of international experts, as long as the US takes reciprocal measures.

Speaking at a joint news conference following their summit talks in Pyongyang, Moon and North Korean leader Kim Jong Un said they agreed to turn the Korean peninsula into a “land of peace without nuclear weapons and nuclear threats.”

Kim said he will visit Seoul in the near future, in what would be the first-ever visit to the South’s capital by a North Korean leader.

The latest summit will be a litmus test for stalled negotiations on the North’s nuclear program between Pyongyang and Washington, and for another meeting Kim recently proposed to U.S. President Donald Trump following their historic encounter in June in Singapore.

Moon was seeking to engineer a proposal that combines a framework for the North’s denuclearization and a joint declaration ending the 1950-53 Korean War.

Kim pledged to work toward the “complete denuclearization of the Korean peninsula” during his first encounter with Moon, and at his summit with Trump in June.

But discussions over how to implement the vague commitments have since faltered, with Washington demanding concrete action towards denuclearization by North Korea before agreeing to a key goal of Pyongyang - declaring an end to the war.

North Korea has given no indication it is willing to give up its nuclear arsenal unilaterally and is seeking relief from crippling international sanctions.

North Korea has offered to stop nuclear and missile tests but did not allowed international inspections for a dismantlement of its only known nuclear site in May, drawing criticism that its action could not be verified and could be easily reversed.

U.S. President Donald Trump welcomed developments on Wednesday at an inter-Korean summit in the North Korean capital of Pyongyang as “very exciting”.“

Kim Jong Un has agreed to allow nuclear inspections, subject to final negotiations, and to permanently dismantle a test site and launch pad in the presence of international experts,” Trump said on Twitter, referring to agreements the North Korean leader made in talks with South Korea’s President Moon Jae-in.

“In the meantime there will be no Rocket or Nuclear testing,” Trump added.

Referring to the repatriation of remains of U.S. service people killed in the Korean War, which Kim and Moon also discussed, Trump said:

“Hero remains to continue being returned home to the United States. Also, North and South Korea will file a joint bid to host the 2032 Olympics. Very exciting!”