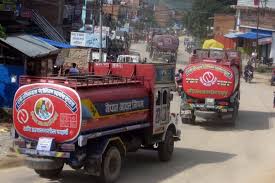 KATHMANDU, Feb 21: The Nepal Oil Corporation (NOC) has enforced a work plan to check misappropriation of petroleum products through cross-border smuggling of the imported fuels.

According to NOC officials, the corporation brought into effect the work plan from Thursday, asking its provincial offices for immediate implementation. The work plan talks about NOC officials taking necessary measures to check the illegal trading of the petroleum products.

NOC Spokesperson Binit Mani Upadhyaya said the petroleum depots will now have to declare in advance a tentative selling quantity of every month to the NOC offices. According to him, the depots are also barred from stocking petroleum more than their storage capacity.

Also, petroleum depots are not allowed to sell petroleum products in separate vessels than directly to the vehicles. “If they need to sell petroleum for specific purposes such as to operate agriculture related equipment, the depots need to maintain details of the buyers,” he said.

Due to the existing price difference in Nepal and India, the cross-border illegal trading of petroleum products is found to be rampant, according to the NOC. As an instance, the District Police Office, Parsa, last week arrested three individuals allegedly involved in illegally transporting 1,060 liters of diesel to India.

Time and again, the state-owned oil monopoly has also been blaming the high petroleum prices in Nepal for the soaring price of fuel in India. The NOC’s records show that diesel costs Rs 93.50 per liter in Nepal while it costs Rs 133 per liter in the Indian market. Similarly, petrol is also expensive by Rs 33.89 per liter in India compared to the price in Nepal.

KATHMANDU, August 27 The Commission for  the Investigation of Abuse of Authority (CIAA) is silent about investigating  Managing Director of... Read More...

NOC can import LPG from other countries

KATHMANDU, Mar 14: Nepal will be able to import cooking gas from countries other than India very soon. ... Read More...