'No-vehicle Zone' a boon for porters in Thamel 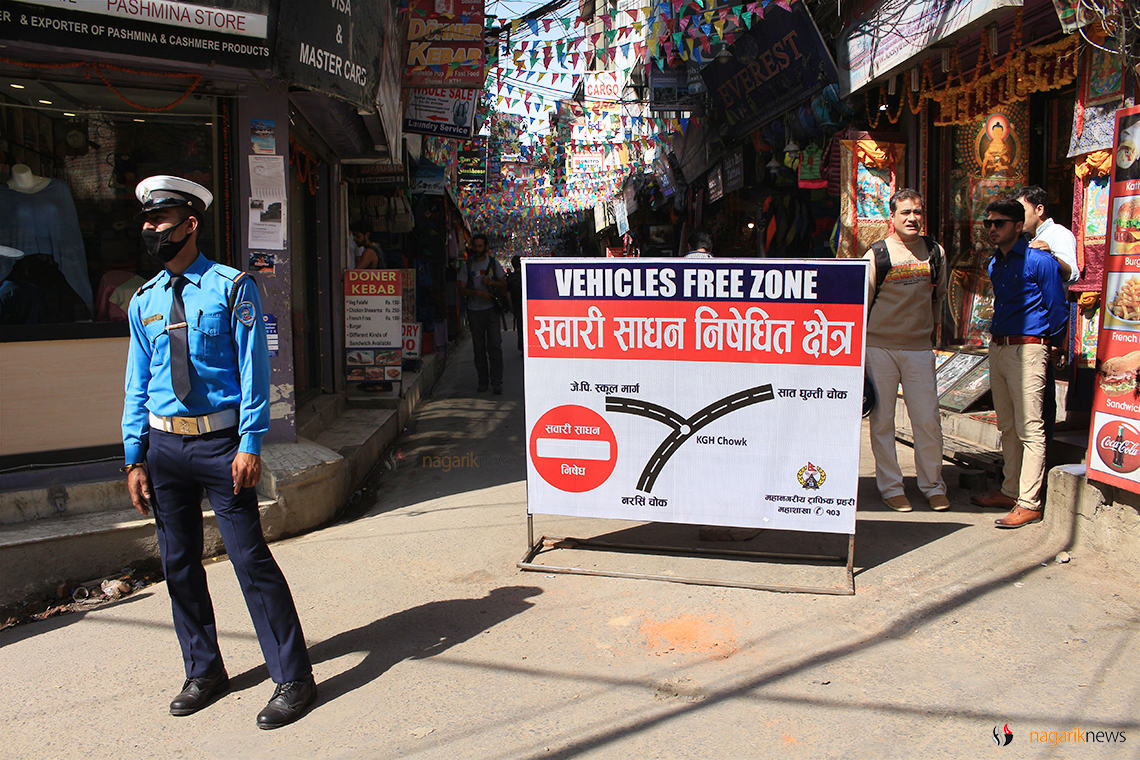 KATHMANDU, Dec 18: Five years ago, financial strain compelled Raj Kumar Magarati of Dallu to leave his home for India in search of employment at a tender age of 16.  After working in several hotels and restaurants, Magarati soon realized that earning money in India is equally hard or even harder than in Nepal. Despite putting all of his efforts, he could not uplift the economic status of his family.

Few months ago, he returned to Nepal and started working as a porter in Thamel. Carrying a head scarf locally known as 'namlo' on his hand, he used to reach Chetrapati chowk every morning looking for customers. He earned enough to feed his family but he knows that it won't be enough for the rest of his life. However, things started to work wonders for him after Thamel was declared a 'no-vehicle zone' few months ago.

These days, Magarati is found moving around the streets of Thamel carrying towering loads on his back supported by the scarf on his forehead. Besides that, he is also found loading and unloading luggage and baggage of tourists and local entrepreneurs.
Despite having a hectic schedule, he always wears a smile on his face. He is happy that he is finally making good money after struggling for years in a foreign land. He no longer has to eye for customers as he gets enough of them and most of the local entrepreneurs contact him directly on his mobile phone. “Now, I earn Rs 2,000 daily on a regular basis and sometimes I even make Rs 3,000 to 4,000 a day which is enough for me,” he said.

In the beginning, the decision of declaring Thamel a 'vehicle-free zone' drew some flak from the local shopkeepers and households. They even staged protests urging the concerned authorities to withdraw the decision. However, in the recent days, the decision has been gradually accepted by all. Tourists and pedestrians have been able to enjoy a peaceful walk without the fear of getting bumped on by vehicles. Thamel, which is the busiest tourist hub, is now free from pollution and unwanted noise of vehicles.

According to Prajwal Rasaili, a vocalist of a local band called 'Aviman', carrying speakers and musical instruments to the clubs was a challenge in the beginning but later they started hiring porters and now they have been used to it. “Earlier, driving our vehicles in the crowded streets of Thamel always consumed a lot of our time but now the porters carry our tools to the club in no time," he said.

The number of porters has increased significantly after the recent implementation of 'walk only zone', informed Pradeep Balam, 40, a senior porter who works in Thamel and Chetrapati areas. "No doubt, it has flourished our earning and we are sure that it will increase the flow of tourists as well," Balam said.

POKHARA, June 19: The no-vehicle zone policy that was introduced in Lakeside, Pokhara, has been removed. The government’s decision to designate... Read More...

Seven years back, Lakeside, the biggest tourist hub in Pokhara, was declared a ‘no-vehicle zone’ on Friday afternoons. The ban... Read More...

A glimpse of Thamel after being declared vehicle-free zone

Presidential election to be held on March 9
1 hour ago