No place for the mentally deranged 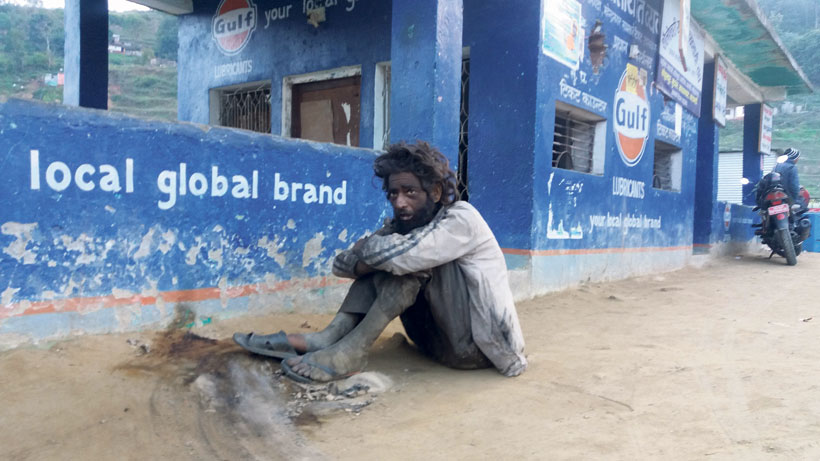 A mentally deranged individual sits in front of the Dipayal bus stop in Dipayal, Doti in this recent picture. He was handed over to police by the local residents after he was found bleeding from injuries. (Arun Bam/Republica)

DOTI, Jan 19: He lived and slept under the open sky of Dipayal’s main market. Street was his home; he would eat anything he could get around. People saw him around the area for the last six months. Though this nameless man drew attention of many passersby nobody helped him from his miseries. Even government bodies did not extend help to this middle-aged man. Last week, he was lying on the street in a critical condition. He had sustained injuries and was bleeding. When locals figured that he was looking fragile, they handed him over to the police, not hospital.

“For a decade I have been running this hotel here. I have seen many individuals with such mental disorders around,” said Deepak Bahadur Khadka, president of Hotel Entrepreneurs Association, Doti. “They create nuisance around the marketplace. Some are quiet and harmless, but some are threat to us, and the business,” he added.

According to Bam Bahadur Bohora, a local resident, this man was not aggressive in nature, but was handed over to the police as he was on the verge of death. “If he had died in the market, it would have been very much problematic. We had to do something about him. As all of us were worried about it so we informed the police and press as well,” Bohora said.

After the man was taken away by the police, locals engaged for hours discussing about the problem. Bohora said that many people with mental disorders end up on the streets after their families abandon them.

“And worst thing about them is that they die on the streets like stray dogs. Neither anyone cremates them, nor does anyone perform their last rites. Because of this, their spirit turns into ghost and remains around here,” he asserted.

The issue was taken to District Administration Officer, Gokarna Prasad Sharma. Locals demanded that the office must do something for people with mental disorders. But Sharma had no concrete plans to share. “We also do not have any place where we can take care of such individuals. This is a serious problem. But this time, we have sent him to a safe place,” Sharma said.

Elaborating on the troubles that the market faces from such individuals, Khadka said that they conduct many upsetting activities like running naked, snatching food from others, pulling and pushing things showcased in front of the shop, among others, “They behave insanely because they are suffering from disorders. Dealing with such individuals everyday is a huge problem,” he said suggesting that government should come up with provisions and facilities to provide asylum and care for such people. “There are at least five to six mentally deranged individuals in Dipayal’s market area and these have to be taken care of by the government,” he added.

Khadka opined that such individuals are left in the town from other places. “And the only way to deal with it is to transport them to somewhere else,” he said asking “what else can we do?” Until and unless the government takes their responsibility and provides proper care for such individuals, they will be scorned by the society, he said.

CDO Sharma said that there is no mental hospital nearby, or else, the problem would be solved to some extent. “At least they could get treatment if there was a hospital here,” he said, adding that there are no resources allocated for taking care of such individuals.
Pawan Bhatta, Human Rights Officer at the Regional Office of National Human Rights Commission, stated that government must have provisions for supporting individuals with psychological disorders. “It is natural for such individuals to stay on the streets and act weirdly. They are abandoned by their family members. They have no one to take care of them. But, the government should look after them,” he stressed.

“Every Nepali has the fundamental right to live with dignity. Every person has right to health. Treatment should be provided to everyone without charges. Just because they are not having sound health, such individuals cannot be treated like goods. They cannot be simply picked and dropped from one place to another,” he stated. He termed that the treatment of such individuals across the country in fact constitutes gross violation of their human rights.

Health experts expressed sadness over people’s attitude towards such individuals. Individuals with such disorders should be treated with dignity and it should be understood that most disorders can be treated, they claimed. “The real problem is the mentality of the ‘normal’ people,” said a psychologist, Dr JP Gupta. “The matter is, psychological illnesses are also like physical illnesses and can be treated. Patients recover but they have to be treated,” he said.

In a better place: Loving herself just the way she is

Kelly Clarkson is our hero. We’ve said this a number of times over the years, as few celebrities are as... Read More...

Bombing near Shiite place of worship kills 22 in NW Pakistan

PESHAWAR, March, 31: A powerful car bomb exploded near a minority Shiite Muslim place of worship in the northwest town of... Read More...