KATHMANDU, Jan 31: Speaker of the dissolved House of Representatives, Agni Prasad Sapkota on Sunday said that the process for conducting parliamentary hearings on the political appointments made at various constitutional bodies by the Constitutional Council in December last year cannot move forward as the House of Representatives remains dissolved.

In a letter to the council headed by Prime Minister KP Sharma Oli, Speaker Sapkota stated that the Hearing Committee under parliament can't conduct the hearings on the recommendations made by the Constitutional Council at present as the tenure of the committee automatically expired after the dissolution of parliament on December 20.

The council chaired by PM Oli had filed an application at the Parliament Secretariat recommending it to conduct hearings on more than three dozen political appointments on the same day when President Bidya Devi Bhandari announced the dissolution of parliament at the recommendation of the government last year.

In the letter, Speaker Sapkota has also questioned the council's decision to make recommendations to various constitutional bodies without giving prior information to him although he is also one of the members of the council.

"The council's decision to make recommendations on various constitutional bodies is against the Supreme Court's ruling," he said.

According to the existing laws, recommendations made by the council in various constitutional bodies don't require a parliamentary hearing if they are not passed by the Parliamentary Hearing Committee within 45 days.

Speaker Sapkota has sent back all original copies of the decisions related to various appointments made by the council at the constitutional bodies to the council.

The CC made appointments in a total of 45 vacant positions in various constitutional bodies including the Commission for the Investigation of Abuse of Authority (CIAA), Election Commission, and National Human Rights Commission.

Those recommended for the appointments include Former Home Secretary Prem Rai as the chief commissioner of the Commission for the Investigation of Abuse of Authority (CIAA), Tap Bahadur Magar as chief commissioner of National Human Rights Commission. Those recommended by the main opposition party, Nepali Congress (NC) President Sher Bahadur Deuba are also included in the list of the appointments. 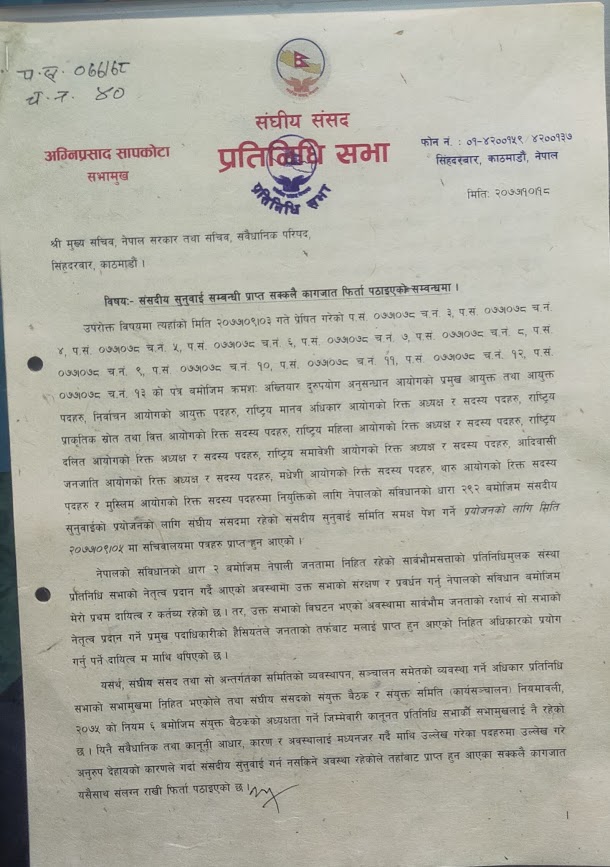 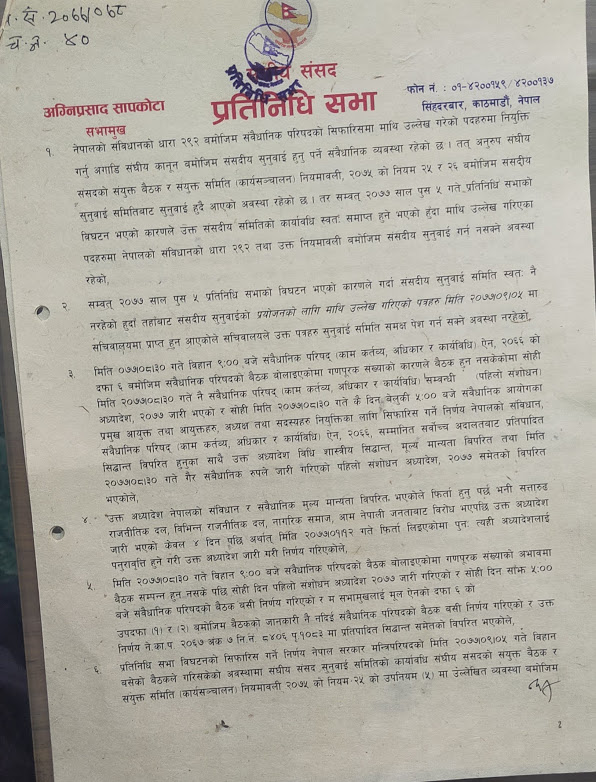 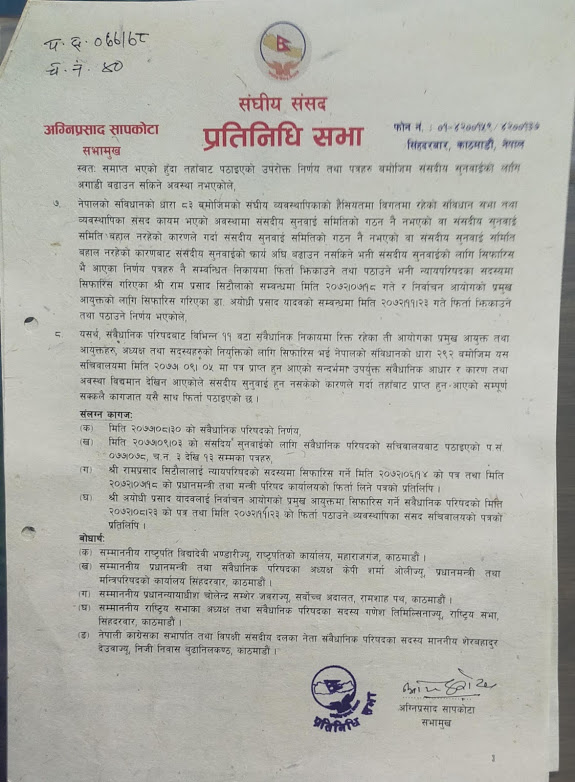 KATHMANDU, Feb 8: China has expressed concern over the evolving political situation in Nepal following the dissolution of the House... Read More...

“Mr Prime Minister, how would you feel if you didn’t get a kidney ahead of transplantation?” (with video)
1 hour ago

Where to contact if someone needs Remdesivir?
10 hours ago

Kathmandu DAO urges hospitals to not create panic
10 hours ago

What we saw at Teku Hospital (photo feature)
2 hours ago

Kathmandu DAO urges hospitals to not create panic
10 hours ago