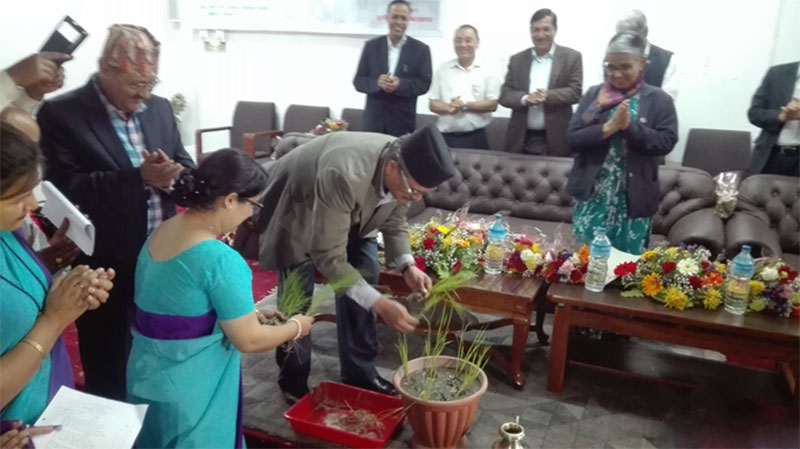 On Wednesday, Agriculture Minister Haribol Prasad Gajurel’s photograph of National Paddy Plantation Festival celebrations (Asar 15) appeared on online news sites. In the photograph, he was sowing paddy saplings in an earthen flower pot at Nepal Agricultural Research Organisation premises. He did not wade through the muddy paddy fields or celebrated it with village folks like agriculture minister Hari Prasad Parajuli did last year and paid with his job.

Parajuli had allowed himself to be smeared with mud from head to toe and went running after women allegedly trying to hug them or seek blessings, depending on how you look at it. After the incident, Parajuli had to resign in a very quick-paced political drama that unfolded entirely on social media, where a picture of this went viral.

As we newsmen having spent some time in Nepal watched this unfolding in our newsrooms in different countries, we did not really know how to react. For us, it was easy to see the village in our imagination and feel the milieu. And, feel sympathy for the minister. The old lady whose photo went viral along with the minister’s was literally completely unaware for the better part of the ensuing scandal in national politics until one of her daughters who was studying in Australia noticed it and called up her mother to find out what this was all about.

By the time the old lady came to know what was transpiring in media offices and power corridors, the minister had exasperated and was ready to resign. The old lady came forward and spoke before a press conference to say that she did not feel the minister misbehaved with her at all and the real culprit was the media which let that incident pass as news. But Parajuli had to go. So this year, the minister did not take any such risk.

Only a day ago, Indian PM Narendra Modi in his first ever media interview to a news channel surprisingly admitted to being scared of speaking freely in a time when media pries on public figures 24x7 and itself remains vulnerable to distortion of facts and perspective. Not long ago Governor of Indian central bank RBI Raghuram Rajan was also in the midst of a raging controversy about his comments on Indian economy in an interview given to an American newspaper, which he maintained was not seen in right perspective and used a certain line out of context to make it look offensive.

What the minister had to lose his coveted job for is actually not very uncommon as media reports and pictures suggest the paddy plantation day is celebrated much in the same fashion across the country. People completely drench themselves in mud and run after each other throwing and slinging more mud from the paddy field which they have together made ready for sowing. You know how it looks—knee deep in the mud, playing and frolicking about. It’s also not very uncommon to find many people drunk on such occasions as part of tradition, if not culture.

The rest of the world, or the cyberworld to be more precise, may not ever be able to grasp this story because it is so much about touch and feel. Why will a minister lose his sense of decorum and indulge in such informal behavior? If you look at the weather and life that immediately follow and the people’s struggle with wild forces of nature, with no government or any aid whatsoever, you find some of the answers. It rains heavily with cloudbursts, lightening, landslides, rivers in spate, disrupted transportation and what not. Life does not come to a standstill but the sheer pleasure of watching the rains and winds if you can afford it, the roaring clouds and overflowing rivers make people stop and watch the paddy fields gradually change colour from grey to green, the bloom, the ripening, the harvest, the storage. While most part of the farm work is done by women themselves, men make sure they accompany them on special occasions like sowing and harvest times. Clean and barren fields of May are virtually one huge pond covered with dense paddy shrubs, making it a big task to find a way through it.

By the time the harvest season comes, winter has already kicked in. The winter sun when it shines in the Himalyan skies, it paints everything beautiful and panoramic, giving the dull the sparkle. Woods, houses, vegetable farms, they all look blooming from every corner, every morning, afresh with the new sun. How can people remain indifferent when the entire surrounding is rejoicing?

So, the songs, the dances, the foods, the festivals and the touch, the longing, the lust. In which part of it are the media and the cyber world interested?

From the old lady in Mulpani to one of the most powerful persons in the region to an economist of impeccable track-record, everyone is scared of the nuisance value of media and social media. It’s about time we took note of this somewhat unsettling trend and did something about it. How about starting off with a charter of self-regulation?

Nepal’s beauty lies in its ethnic and cultural diversity. Nepal is one country in the region where female population is higher than male population, where there is no taboo on women working in farms or factories, and they are more respected by the men in their country than their counterparts in neighbouring countries. A minister trying to hug one such woman is no misdemeanor. And there is no need to feel embarrassed for an act that is so much part of one’s culture and tradition. Being politically correct is fine, but taking pride in one’s culture is no mischief either.

There is an ever greater need to junk a black and white approach to life; colors are the essence of life.

When air touch her

You are on your borders And try to maintain law and order You control your selves from getting in touch ... Read More...

Go ahead and hand your kid a gadget now and then to cook dinner or get some work done. ... Read More...

Biden White House asks 'Trump who?' ahead of speech to conservatives
20 hours ago

In his written response to SC, Dahal says courts can never be influenced by rallies, slogans and speeches
22 minutes ago

New mother dies in lack of timely treatment
57 minutes ago