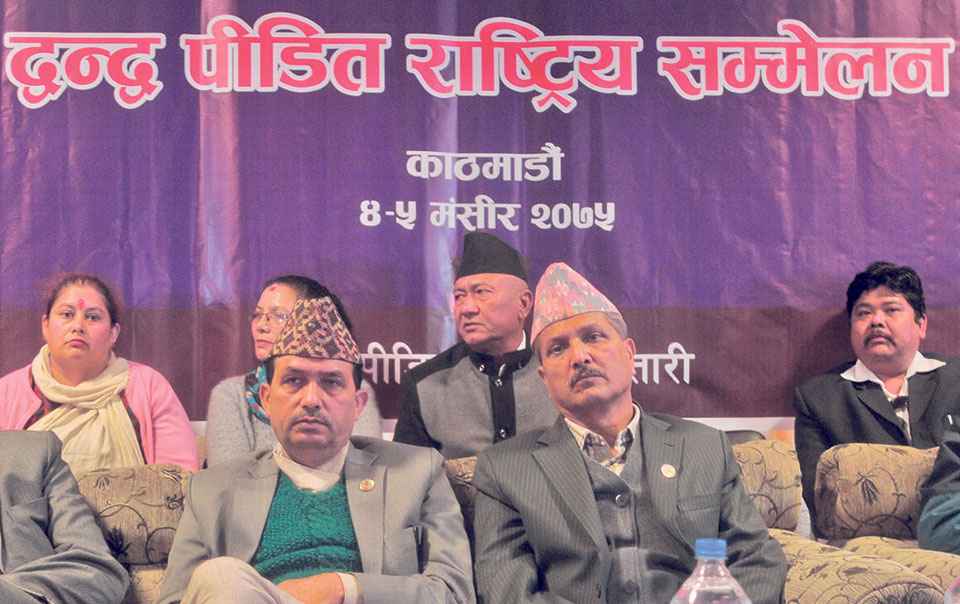 Minister for Law and Justice Bhanubhakta Dhakal (left) among others at the national convention of the Conflict Victims Common Platform in Kamaladi, Kathmandu on Tuesday. The two-day convention will conclude Wednesday. Photo: Bijay Gajmer/Republica

KATHMANDU, Nov 21: Minister for Law, Justice and Parliamentary Affairs Bhanu Bhakta Dhakal has said that the government will resolve the issues of transitional justice without granting a general amnesty to those involved in serious human rights violations during the Maoist armed insurgency.

Addressing a national convention of the Conflict Victims Common Platform held in Kathmandu Tuesday, Minister Dhakal asked conflict victims not to harbor any doubts about the intention of the government to resolve transitional justice issues without compromising internationally accepted norms and human rights values. “We will resolve the issues of transitional justice without giving any general amnesty for those involved in serious violations of human rights. I want to assure you of this,” he said. The minister was trying to allay the concern of conflict victims that preparations were underway to settle transitional justice cases under general amnesty provisions even where serious violations are involved.

Reiterating his assurances of victims-centric transitional justice, Dhakal said the government would honor the constitution, the Supreme Court verdict and various international human rights treaties and conventions to which Nepal is a party as well as address the concerns of conflict victims, while formulating law related to transitional justice. The minister said the government was ready to discuss how the existing Truth and Reconciliation Commission and the Commission for the Investigation of Enforced Disappeared Persons can be made more effective since the terms of these commissions are expiring soon.

Also speaking on the occasion, Nepali Congress (NC) leader Ramesh Lekhak said the transitional justice process should honor a few basic norms such as investigating the truth, prosecution of those involved in crime, reparation for the victims and their families, and ensuring that such conflict does not recur in future. “It is equally important to ensure conflict victims a sense of dignity and create an environment of self-respect,” he said.

Lekhak said the NC is committed to ensuring justice for the victims and taking measures to prevent such conflict in future. “There is no need for the government and the opposition party to stand apart in matters concerning transitional justice. All parties concerned should work together to resolve this issue,” he said.

Senior Nepal Communist Party (NCP) leader Haribol Gajurel said that the transitional justice process had failed to make any headway so far as each major party in the country was concerned about protecting its own party cadres.

“Since the victims of both sides have come together on a single platform, there is hope the transitional justice process will get expedited,” he said.

Conflict victims and human rights advocates who spoke on the occasion lamented that transitional justice remained elusive even 12 years after the Comprehensive Peace Accord was signed. They argued that the political parties had forgotten the plight of conflict victims as if the peace process had already come to a conclusion.

The two-day national convention is scheduled to come up with a declaration with various suggestions to address transitional justice issues without further delay. The CVCP had earlier organized five regional level consultations with conflict victims before organizing the national level convention. 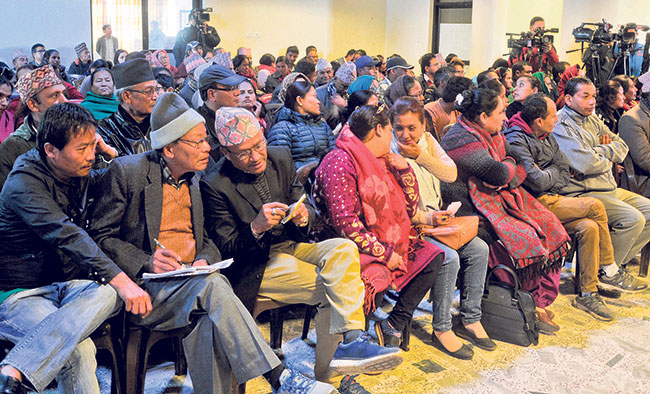 Conflict victims from various districts at national convention of the Conflict Victims Common Platform in Kamaladi, Kathmandu on Tuesday. Wednesday marks 12 years since the signing of the Comprehensive Peace Accord between the rebel Maoists and the government. Photo: Bijay Gajmer/Republica