No chopper for women 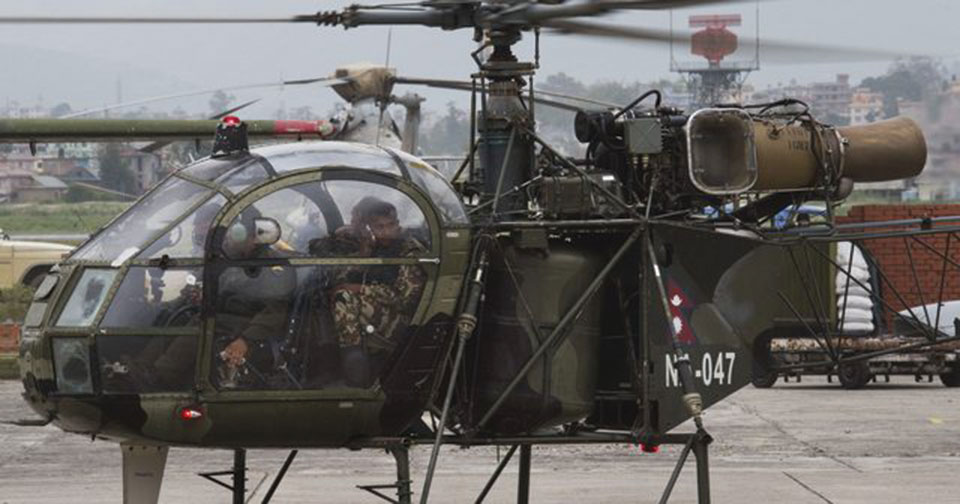 It was rumored that women were effectively forbidden from boarding any of army’s helicopters. It was believed to have been done at Queen Aishwarya’s behest

As we all know, it would be difficult for women, or even men for that matter, to manage without a chopper in the kitchen. But even if this piece is not about the kitchen thing, I will get back to it later. As for the term, Americans found it logical to call helicopter a “chopper” as its rotor made “chop, chop” like sound more so because of long blades and slow rotation. But oddly enough this piece is about two interesting stories related to Royal Nepal Army (Air Wing). And for its name, “air wing” sounds more appropriate than assertive “air force”. As such, it is burdened by too many different types and equally diverse capabilities aircrafts in a fleet so tiny. Newer inductions in the offing are also said to be on the same trend. Relief or rescue works become paramount only during natural calamities/emergencies making it a compulsion to have differently capable aircrafts, even if expensive to keep and maintain. But its visible role is still related to mundane works like ferrying VIPs.

Its earliest fleet detail of 33 frames was copied and saved some years back, but the same was sadly missed for the link address. It showed there were 18 helicopters comprising 10/Alouettes, 3/Bells, 4/Pumas and 1/Mi-4. We also find 10/STOLs like 3/Twin Pioneers, 1/AN2, 2/Twin-Otters and 4/Skyvans. Among non-STOLs there were 2/DC3s, 1/HS748 and 1/IL14. The one that did not fit was the odd Queenair.

Evolution of royal flight
Historically, Royal need resulted in emerging of Royal Flight (RF) as army’s offshoot in the mid 60s. The use of transport aircraft in operation against Khampa uprising of 1974 was perhaps the first of its kind for the army’s air wing. It had to rush 2/Skyvans with paratroopers to the remote northwest region of the country to block Gey Wengdi’s escape route. He was finally trapped and felled at Tinkar-lipu on September 15 around 30°N/81°E, less than 3Km from the India “occupied” Nepali territory with terrain altitude exceeding 15000 feet. Khampas were assisted by CIA with India as covert ally in opposing alleged Chinese occupation of Tibet. Even with unimpressive bumblebee like hulky, Skyvan, nevertheless, did most of army’s bulk works like hauling supplies and in training of paratroops for which it relied on RAN14 & 15. As for 9N-RAA, which was under exclusive royal usage earlier, it became RAN-19 later. There was also a fourth one, RAN-23, which had a short stint as it crashed not long after induction.

During early years, first few aircrafts had “RF” prefix. The only Ilyushin-14 was listed as RF1, the historic “CVC” as RF2. One of two Chinese aircrafts (Y5/An2) presented to King Mahendra became RF3. Record shows RF4 as a twin engine Beech 65-80 Queenair was bought in 1963 and sold out later, while RF5 was its first ever copter, an Alouette. Besides, there were few Bell206L helicopters but these were registered, strangely, on series along non-RF track (or RAA track) as 9N-RAH /RA/RAI. But confusion still persists on three fronts: (a) about all in RF series plus missing details on RF11, 12 & 13 (b) same relating to five under RAN series namely: RAN22, 23, 24, 28 & 29 and (c) clarity about all grouped under RAA series. I am not sure if two or three micro-lights that army possessed fall among these. Needless to say, any clarification, corrections or further information about new additions from knowledgeable persons will be much appreciated.

But interestingly there were 3/Twin Pioneers (TPs), made by Scottish Aviation that were gifted to RF (RF6/7/8). Aesthetically, it looked more like stunted Dakota as it sat tilted on the ground. But it had high wing instead of low and three vertical fins instead of one that made it look heavier on the aft section. That aside, to onlookers it was not an exciting aircraft to watch as it flew very sluggishly. But the company was desirous of selling some to RNAC as STOLs. That was some five to six years before RA acquired Twin Otters. It was apparent that gifting was intended in getting it favored by the palace. That seemed to have worked. No sooner hints were dropped to Capt KK Shrestha, as a senior pilot in RA, to submit a positive report. Even the Defense Minister called him to Singha Durbar to remind about the “royal wish.” The intent seems to be to get it done quietly. But KK, being strangely stubborn, refused to dance to the tune. This is based on an elaborate write up mailed to this scribe by Capt KK himself.

Thereafter, RF managed to get Wing Commander Sarin (WC), on deputation from Indian Air Force. But to make it appear right and proper, the Department of Civil Aviation was still asked to evaluate aircraft’s performance for which RA again deputed Capt KK. The WC spoke very highly of its usefulness for a mountainous country even if India had no Twin Pioneers and he himself had limited experience. On November 21, 1967, the day of the evaluation flight, they took off in the afternoon and climbed circling over the valley. There were 14 fully geared soldiers on board creating an actual loading situation. On reaching 14,000 feet, KK asked the WC to cut out one engine and asked him to show at what height he can hold the aircraft level. The test aircraft was RF8, but with one engine out it was unable to hold and kept on losing altitude. It was not able to hold even at 6000 feet. It became too much for the WC and at 5000 feet or barely 500 feet above the ground he restarted the dead engine and having nothing more to prove he opted to land. They hardly spoke during the entire flight that lasted about 70 minutes. After landing both signed a document declaring Twin Pioneer was unsafe for STOL operations vindicating KK’s views all along. The rest is history. But this seems to have done some good. We see army abruptly go for the turboprop Twin-Otter (RF9) next.

No room for women
As for the title and another story, it was rumored that women were effectively forbidden from boarding any of army’s helicopters. We do not know what triggered it, but it was believed to have been done at Queen Aishwarya’s own behest. We cannot think of anything other than there being some sort of grave incident involving women in some remote/rural location that seem to have reached her ears. Manned helicopters are quite capable in landing or taking off from anywhere, pick anyone, fly off anywhere and finally drop back later. One can very well imagine if it involved an innocent village belle coaxed to come for a pleasure ride in some remote locations, away from prying eyes and ears.

As such, no one dared disobey the diktat and it was a mere coincidence that this scribe happened to see its impact at Kulekhani, of all the places, during inauguration of K-II in 1986. The King and the Queen were there for the inauguration and had just departed after the ceremony while other VIPs waited to head back in RAN-18 (Puma). Among the passengers was a lady, the then minister’s daughter. The Captain curtly said that he would not be able to take her. It naturally resulted in an embarrassing situation for the high officials there, namely the Secretary and the NEA chief. But as it seemed, they were able to convenience him after some 10-15 minutes of persuasion that since the chopper was chartered by NEA the diktat stood null and void, at least for the return flight. It was all smiles thereafter. Overtime all, including the then minister and the three involved in the above case, have departed to the world beyond.

Lastly, it is unbelievable that it has been 32 years since K-II and a small project like K-III that required nothing more than channeled tail race water is yet to run. Ironically, it is in the most convenient project location one can ever imagine. And yet, taken for fools, we are made to believe in uncertain projects that are far too distant while immediate doable ones get neglected as we can see all around. Unconcerned, the dream mill gets ever busier chop-chopping more.

BIRENDRANAGAR, Feb 27: As she was collecting fodder, Kalpana Acharya fell from a tree on February 16 and broke her... Read More...

KATHMANDU, June 26: Commission for the Investigation of Abuse of Authority (CIAA) has launched an investigation into the national flag carrier'... Read More...