No birthday celebration for Wenger as Arsenal slips up 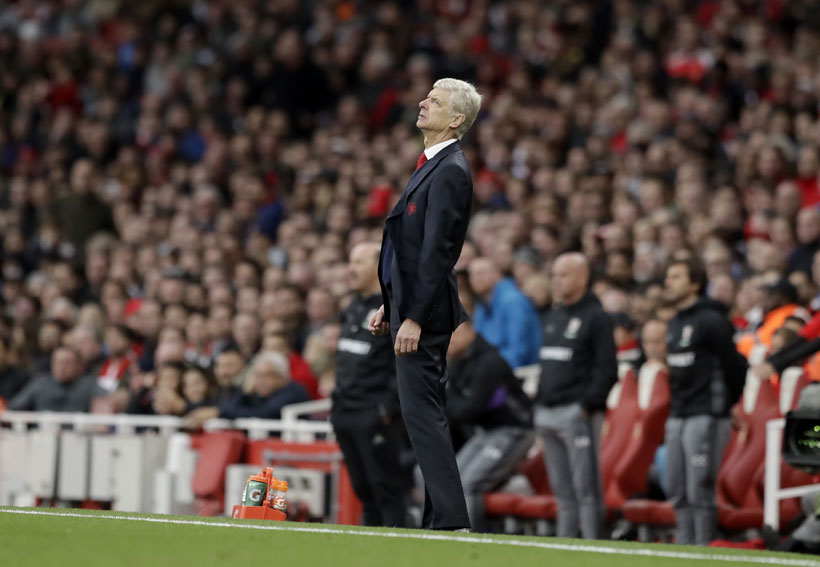 MANCHESTER, England, Oct 23: Arsenal climbed to the top of the English Premier League on its manager's 67th birthday.

Arsene Wenger was in no mood to celebrate, though.

A 0-0 home draw against struggling Middlesbrough brought an end to Arsenal's six-game winning run in the league, just when Wenger's team was being talked up as the real deal in the title race.

Many will describe a slip-up of this kind as being typical of Arsenal, which has stumbled when expectations are at their highest in recent years. Its last league title came in 2004.

It could have been worse, too, with Middlesbrough creating the better chances at Emirates Stadium and drawing three excellent saves out of Arsenal goalkeeper Petr Cech in the first half. Wenger said his team was flat because the game came just three days after an "intense" Champions League match against Ludogorets, which Arsenal won 6-0.

"At least you can have a drink on your birthday," a glum Wenger said. "When you win, you deserve it. When you don't, you need it."

Arsenal is in first place on goal difference from Liverpool, which beat West Bromwich Albion 2-1 at Anfield for a sixth win in nine league matches. Manchester City needs only a point against Southampton on Sunday to reclaim the lead.

Here's a look at the rest of the action on a low-scoring day in the Premier League:

Neutralized by Manchester United in a goalless draw on Monday, Liverpool found things much easier five days later against another opponent that came to Anfield to defend.

Liverpool had 21 shots and 68 percent possession, scoring goals through Sadio Mane and Philippe Coutinho from sweeping attacks in a one-sided first half.

This stalemate came at the end of a week when Spurs squandered many chances in a 1-1 draw at West Bromwich Albion last weekend in the Premier League, and then drew 0-0 at Bayer Leverkusen in the Champions League on Tuesday.

Kane, the Premier League's top scorer last season, has just returned to training after five weeks out with an ankle injury.

Spurs remain the only unbeaten team in the league but missed the chance to go top overnight.

Leicester finally managed to transfer its Champions League form to the Premier League.

Ahmed Musa, Shinji Okazaki, and Christian Fuchs scored for Leicester in only a third win of its disappointing title defense.

It's been a different story in the team's first-ever Champions League campaign: With three straight group-stage victories, Leicester is on the brink of qualifying for the last 16.

Leicester's unbeaten run at its King Power stadium stretched to 20 league games. It's away from home where the champions have struggled this season.

Things are looking bleak for Sunderland and its manager David Moyes. A 1-0 loss at West Ham, courtesy of a goal by Winsten Reid in the fourth minute of stoppage time, was the latest tough blow for a side that is winless and in last place on just two points from nine games.

Swansea is next to last after drawing 0-0 at home to Watford, meaning new manager Bob Bradley is still awaiting his first win since taking charge. That was one of three goalless draws on Saturday, when there were just 13 goals in eight games.

Also, Burnley beat Everton 2-1 thanks to Scott Arfield's 90th-minute winner, and Xherdan Shaqiri scored twice for Stoke in a 2-0 win at Hull, which slipped into the bottom three.