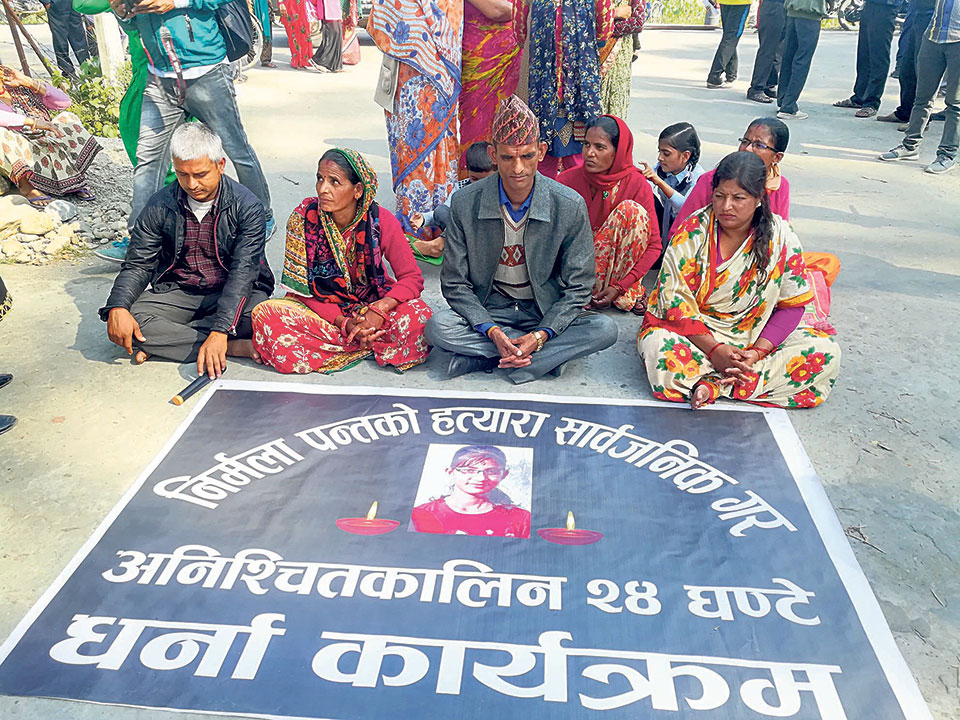 KANCHANPUR, Nov 12: Demanding justice for their raped and murdered daughter, the parents of Nirmala Panta have started sit-in protest for 'indefinite period' in front of Kanchanpur District Administration Office (DAO) from Sunday.

The parents were accompanied by women rights activists, members of the civil society, students and the locals on the first day of the protest. They started a rally from Madanchowk which later convened into a sit-in demonstration in front of the DAO gate. The sit-in started from Sunday noon.

“A few weeks ago, we met the prime minister and home minister. They assured us of delivering justice. But so far, it has not been the case,” said Nirmala's mother Durga Devi Panta. “Their assurances have turned out to be just hollow promises as police are unable to nab those responsible for my daughter's rape and murder.”

According to her, they are forced to organize the sit-in demonstration as the government did not seem serious about booking those involved in the heinous crime. “We'll continue sit-in for an indefinite period until justice is delivered.”

The victim's mother further said that the soul of her daughter will not be able to rest in peace otherwise. “I myself will not be at peace until I see justice done,” added Durga Devi.

Likewise, Nirmala's father Yagya Raj Panta said their only demand is to book the culprits responsible for the rape and murder of their daughter.

“I will die in front of the DAO but I'll not be pushed away from my sit-in until they nab the culprits,” he said, stating that they will be organizing the sit-in round the clock for 24 hours.

Nirmala Panta, the 13-year-old girl from Bhimdutta Municipality-2 of Kanchanpur, went missing on July 26 after she had gone to her friend Roshani Bam's house earlier that day. Her body was found the next day in a sugarcane field.