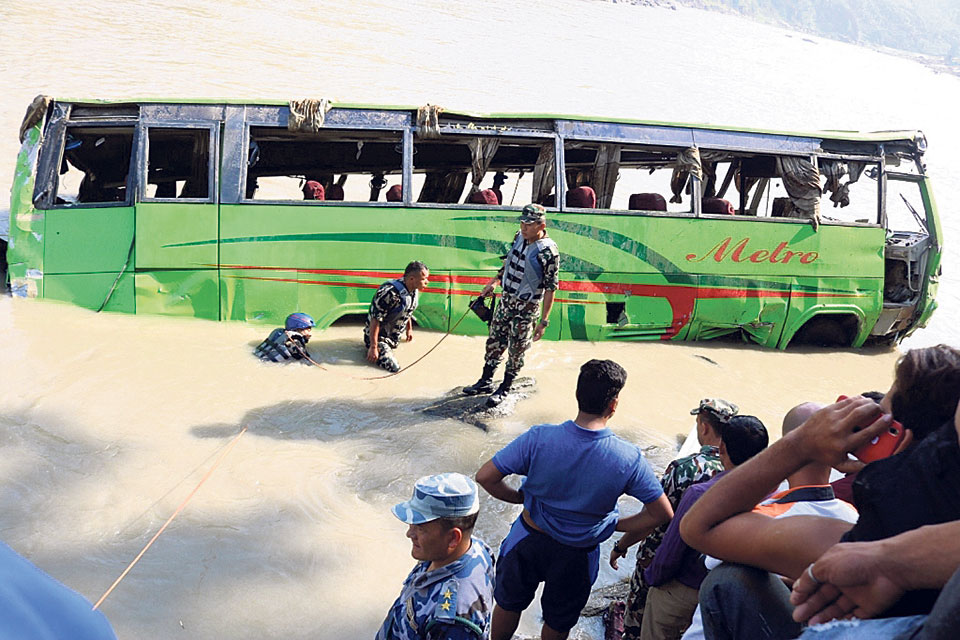 Army and police personnel during a rescue operation after a passengers a bus plunged into the Trishuli River in Dhadhing on Sunday morning. Injured passengers blamed over-speeding as the cause of the accident. Photo: Sarita Shrestha

DHADING/ BAITADI, May 20: A total of 12 people were killed in two different accidents that occurred in Dhading and Baitadi districts on Sunday.

Nine people died and 23 others sustained injuries when a passenger bus plunged into the Trishuli River in Gajuri Rural Municipality-5, Banchetar on Sunday morning.

Six of the passengers died on the spot while three more died in course of treatment, according to police. The deceased have been identified as Raj Kumar Subedi, 51, of Thankot, Kathmandu; Sita Thapaliya, 36, of Chandragiri; Bishal Giri, 20, of Kanyam, Ilam; and Rajan Acharya,43, of Rorang Rural Municipality, Dhading. Similarly, the addresses of two more deceased Shekhar Magar and Prakash Shrestha are yet to be ascertained.

As some passengers did not have their identity cards or any other details, their identities were yet to be ascertained by the time this news was prepared. The ill-fated bus (Na 7 Kha 4387) bus was heading toward Kathmandu from Kakadvitta of Jhapa when it met with the accident at around 6 am.

Superintendent of Police (SP) Raj Kumar Baidawar informed Republica that it skidded off the road and plunged some 60 meters below.

“Our team headed toward the site for the rescue immediately after being informed about the accident,” said SP Baidawar, adding, “We got little late in lack of rescue materials.”

According to him, most of the injured patients blamed over-speeding for the accident. The injured are currently undergoing treatment in Kathmandu-based Trauma Center.

Before the accident, the bus had stopped at a fuel station near Gajuri. Fadindra Karki, one of the passengers, said that a new driver took charge of the bus after refueling at the station.

“The bus had only travelled two to three kilometers from the petrol pump when the accident took place,” said injured Karki, adding, “Most of were tired after the long journey and were closing our eyes although we were not asleep. Suddenly, we heard a loud noise and when we opened our eyes we were already in the river.”

He says he narrowly escaped death by coming out of the window of the vehicle. He also managed to rescue a few other passengers who were struggling and crying for help. Later, he was joined by the locals and police in the rescue work. Karki was initially referred to Gajuri Community Hospital but is currently undergoing treatment at the Trauma Center.

According to another victim, Ram Prasad Subedi, of Khayarghari, Dhading, and bus had started shaking before the accident.

“The driver was changed at the petrol pump, after which the bus was swinging and shaking,” said Subedi, adding, “I have no idea how I reached into the river.”

Dilip Tamang, a local who was the first one to reach the site for the rescue, says that the passengers were scattered all over the cliff and were screaming for help.

“The bus was in the Trishuli River while the passengers were scattered over the cliff,” said Tamang.

In another accident that occurred in Baitadi, three more people died when a jeep (Ga 1 Ja 4921) heading toward Nagarjun from Dehimandu met with an accident in Nanigad of Dashrathchand Municipality-11. The accident occurred at around 11 am on Sunday, according to Deputy Superintendent of Police (DSP) Netramani Giri of District Police Office (DPO), Baitadi.

The deceased have been identified as 65-year-old Hiraballav Bhatta, his brother Lalmani Bhatta, 55, and Naruli Bhatta, 45, all from Dashrathchand Municipality-10, Barakot. The cause of the accident is yet to be ascertained. According to other injured passengers, the jeep slipped while applying the brake in a section of worn off road.

All the passengers were returning from a Puja in Nagarjun-based Deutal temple. Reportedly, the jeep had plunged around 150 meters below the road.

DOLAKHA, July 2: The road connecting the district headquarters Charikot with the Bhimeshwar Temple of Dolakha Bazaar was recently blacktopped after... Read More...