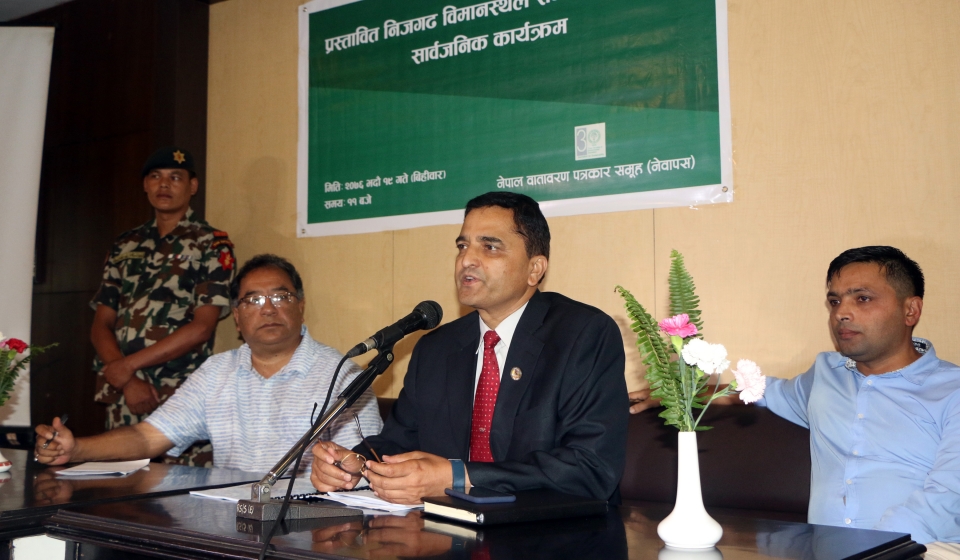 KATHMANDU, Sept 5: Minister for Culture, Tourism and Civil Aviation, Yogesh Bhattarai on Wednesday said Nijgadh International Airport would be constructed in the same location as suggested by a study relating to the project. The location for the project would not change whatsoever, he said.

Movement of a total of 8 million passengers takes place from Tribhuvan International Airport (TIA) yearly, and the figure is increasing by 7.5 per cent every year. TIA alone cannot endure the pressure of passengers if the figure keeps on increasing. So, alternatives to this airport should be sought, said minister Bhattarai.

Emphasizing the exploration of another international airport in the country as the pressure of passengers at TIA would reach at a higher point by 2022, minister Bhattarai said, "We will try our best to reduce environmental impacts while constructing the airport."

Minister Bhattarai was speaking at an interaction program organized in Kathmandu by the Nepal Forum of Environmental Journalists (NEFEJ).

Airways are effective means to attract a large number of tourists, and there is a need to increase and expand international airports in the country, he said.

The government has taken environmental aspects seriously relating to the construction of the airport, he said, "The government is closely following discussions on the matter by various quarters."

Additional discussions would be held after preparing modality of the airport in some months, he said, informing that the construction of Gautam Buddha and Pokhara International airports has reached the final stage.

Likewise, a former member of the National Planning Commission, Dr Prabhu Budhathoki suggested the selection of appropriate location for the airport for the conservation of biodiversity.

Our mountains are safe and pristine: Minister Bhattarai

New tourism minister has come up with list of tasks he wishes to get done before Visit Nepal Year 2020.... Read More...

Residents of Nabhi, Gunji and Kuti used to pay land revenue to Nepal until 2035 BS
19 hours ago

Unlocking the lockdown
20 hours ago