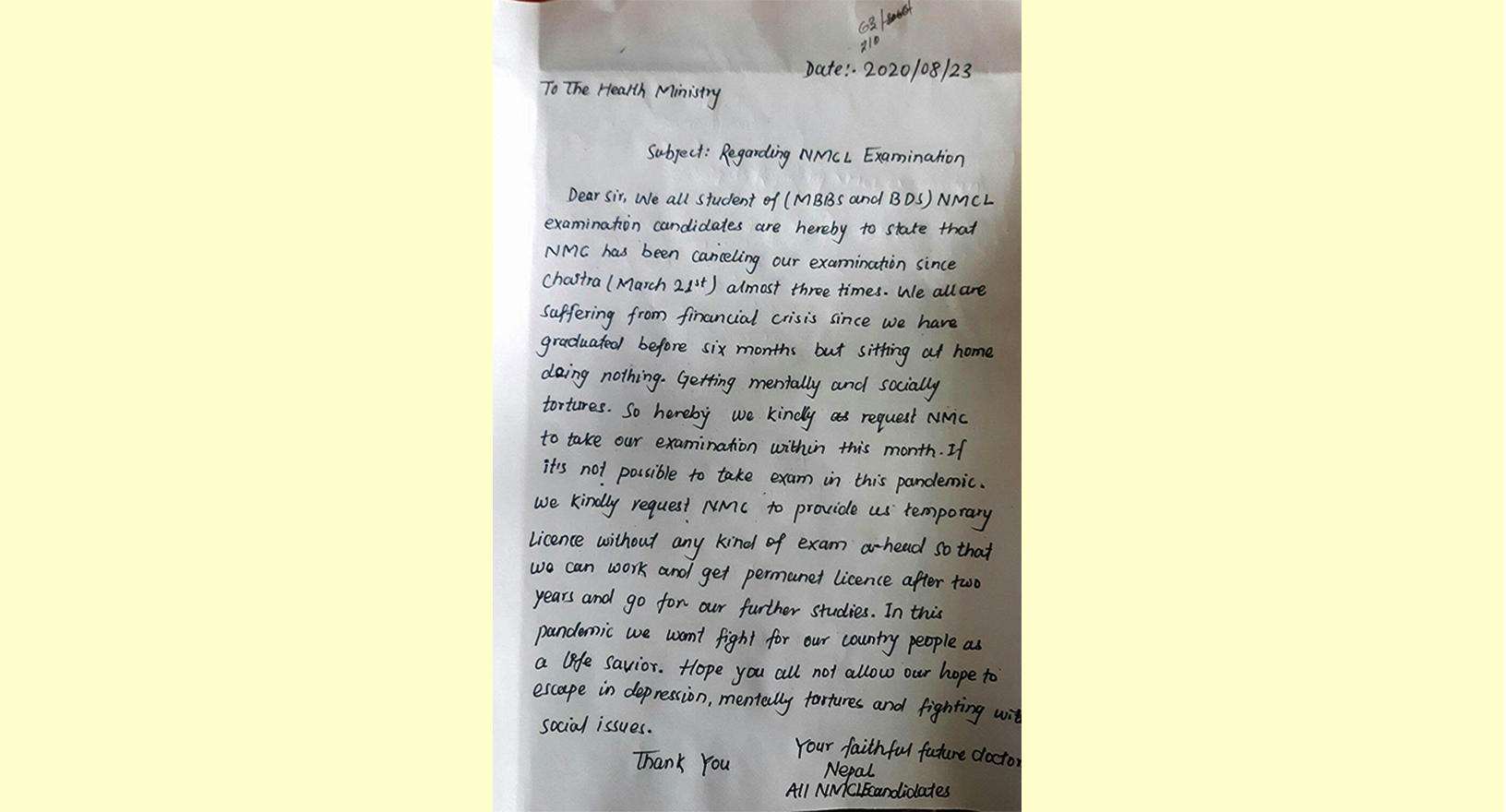 KATHMANDU, Aug 25: Medical doctors who recently completed their undergraduate degree (MBBS and BDS) have been impatiently waiting to put their skills to use. Thousands of students who completed their medical internships have been waiting for the government to deploy them to work on frontlines of the fight against COVID-19.

What infuriates the newly-minted medical doctors is that even as the government claims that the nation lacks adequate healthcare workers to fight the pandemic, the authorities are not willing to recruit those who already have a medical degree.

"The government is looking for people with a medical license, not realizing that we (the graduate students with no license) are equally capable and can be of great help during this crisis," said Jha.

The students say that the government's indifference to their offer of help is tantamount to underestimating the efforts they put in for years in medical schools. "We have passed our tests and have completed internships," Jha said, adding, "However, ignoring the existing manpower just because we don’t have the medical license is just irrational.”

Medical students are authorized to work only after they receive a medical license after passing an examination conducted by the Nepal Medical Council (NMC). The examination is conducted every four months, and those who fail the exam are left with a few options; either to reapply for the exam or quit their hope of becoming a doctor, even when they have already graduated and have completed the internships.

"The licensing exam is like a double-burden, and it kills thousands of dreams every year," he said.

However, the situation is worse this year as the licensing exam has been delayed due to the pandemic. "Over 1,200 medical students who applied for the exam face an uncertain future in the face of the pandemic," said a medical graduate who did not wish to be named.

The Council has been cancelling the exam since March 21 for three times now, leaving the students in confusion. Under normal circumstances, the licensing exam is held three times a year, every four months. After postponing the exam twice, the Council was planning on conducting the exam on August 23. However, because of the government's decision to impose a second phase of the lockdown, the exam has been postponed once again.

According to those students, most of the students are facing not just mental stress but also financial strain. The students completed their course more than six months ago, but have been forced to stay at home, doing nothing substantial.

"Medical schools are expensive. Most of us have huge student debt. Six months is a long time, and we could have at least lessened the financial burden on our families," said the student.

Of late, the students are being constantly nagged by their family members, relatives as well as friends, adding the mental strain in them. In a letter to the Health Ministry dated August 23, the MBBS/BDS-completed students stated that they are “suffering from financial crisis,” and that they hope that the government would help them from sliding into “depression” as they are facing “mental torture and social pressure”. The letter also requests the NMC to provide them with a workinglicenseif the examination cannot be conducted as soon as possible.

Citing examples from USA, Canada and few other European countries where medical students have been allowed to join on the frontlines of the fight against the pandemic, the students said that Nepal should do the same.

"Harnessing medical students in the fight against COVID-19 has the advantage, while addressing public health needs, of providing a learning environment with authentic patient experiences for students. Many medical students deem it an obligation to contribute to the healthcare response during a pandemic and are eager to do so. Considering that today's students will be tomorrow's doctors, it is arguably counterproductive to artificially shield them from the realities of medicine in crisis times," states an article written in a biomedical and life sciences journal published by U.S. National Library of Medicine and National Institute of Health (NLM/NIH).

"We expect the government to hear us in this difficult time. We are ready to make the use of our skills and experiences," said the students.