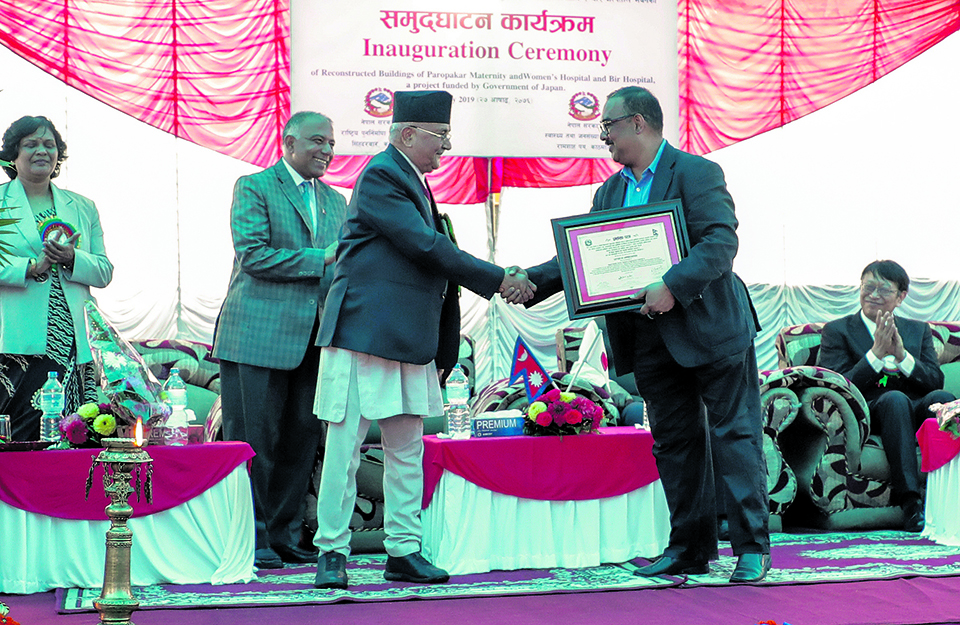 KATHMANDU, July 12: The newly-constructed buildings of Paropakar Maternity and Women's Hospital and Bir Hospital were handed over to the government on Friday. The buildings have been built with the financial assistance of the Japanese government.

Director of the maternity hospital, Jageshwor Gautam said the hospital has put in place a waste management system based on WHO standards, digital admission and discharge system, diagnosis and treatment of cervical cancer, ultrasound, and an IVF centre and has a nursing college in Kupondole. He also said that they plan to further expand the hospital's facilities in the future.
The maternity hospital building is for multiple medical services and educational purpose whereas the new three-story building of Bir Hospital is for various functions including ICU and cardiology department. The new buildings are equipped with different back-up systems that will allow the hospital to continue its operations without disruption in post-disaster emergencies. Furthermore, compared to the old building, various functionalities have been enhanced so that a seamless flow of obstetric care can be provided, according to a press statement issued by the Embassy of Japan in Kathmandu.

Speaking after the inaugurating the maternity hospital building, Prime Minister Oli thanked the Japan government and JICA for their kind assistance. Japan supported the reconstruction of the buildings, besides providing essential medical equipment. The reconstruction work falls under Japan's Grant Assistance 'Program for Rehabilitation and Recovery from Nepal Earthquake' and stands as a symbol of friendship between Japan and Nepal.

Also speaking on the occasion, JICA Nepal head Yumiko Asakuma said she felt happy to hand over the hospital building four years after they started the construction works. While stating that the hospital serves as an example of Build Back Better, she expressed hope that the hospital would be able to provide maternity services to all pregnant women and their babies without any disruption.
Separately, DPM and Health Minister Yadav inaugurated the newly-constructed building of Bir Hospital amid a special function. Japanese Ambassador Saigo said Bir Hospital would provide quality health services to the general public. He also expressed his confidence that Japan would continue to help in the post-quake rehabilitation and recovery, learning from their experiences of post-disaster management.

KATHMANDU, July 28: Although the construction of a new 100-bed building of the country's old hospital, Bir Hospital, was completed... Read More...