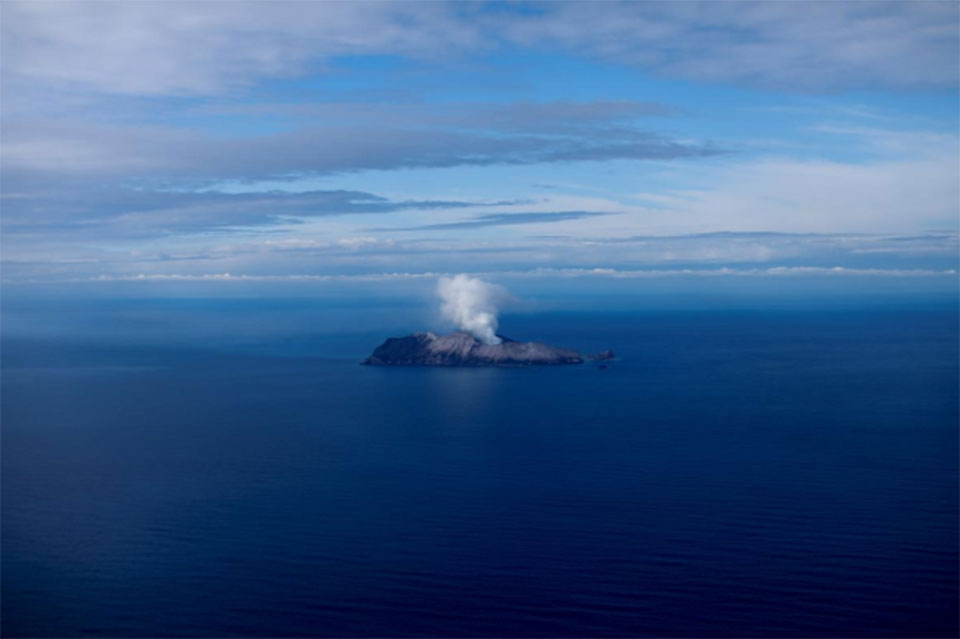 WHAKATANE/WELLINGTON, Dec 12: Police in New Zealand are planning a mission to volcanic White Island on Friday to retrieve bodies of people killed in this week’s eruption, while the known death toll from the disaster climbed to eight, with two people dying in hospital.

Eight more people are missing and presumed dead, buried under ash and debris from Monday’s eruption. More than 20 people are in hospital, many with severe burns, while seven others have been transferred to burns units in Australia.

“I can now confirm that we are finalising a plan to recover the bodies from Whakaari/ White Island tomorrow morning,” police Deputy Commissioner John Tims said in a statement on Thursday, adding families will be briefed on the operation.

Another police officer, Deputy Commissioner Mike Clement, later told a news conference the mission was risky and that a team would deploy at first light on Friday.

Six bodies could be seen and there would be “very limited” opportunity to search for the other two, he said.

“A lot has to go right for this to work,” Clement said.

The volcano on White Island was “highly volatile” and could erupt again within days, said authorities. 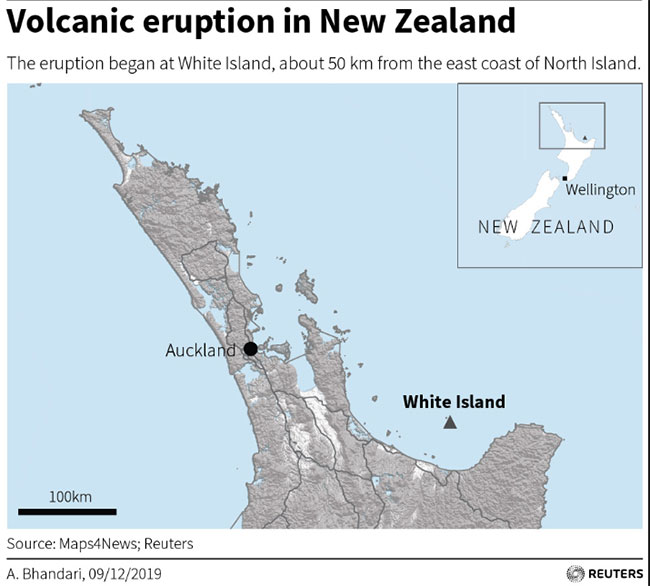 There are no signs of life on the uninhabited island.

“We are now living with a growing sense of desperation to bring home those that we know are there and those we love,” said Judy Turner, the mayor of Whakatane, the nearest town on the mainland. “The frustration of those families most affected is completely understandable. No news is not good news for people in this situation.”

The volcano, a popular tourist destination for day-trips, erupted on Monday, spewing ash and steam over the island.

There were 47 people on the island, also known by its Maori name Whakaari, at the time of the eruption. Twenty-four of those were from Australia, nine from the United States, five from New Zealand, four from Germany, two each from China and Britain and one from Malaysia.

Graham Leonard, a senior scientist at New Zealand’s geological science agency GNS Science, said monitoring equipment still active on the island put the risk of a further eruption over the next 24 hours at 50% to 60%, up from 40% to 60% on Wednesday.

“Today is less safe than yesterday and the day before,” he said.

In the event of another eruption, anybody on the island could be “pummelled to death” by flying rocks or overcome by ash and gases in temperatures exceeding hundreds of degrees Celsius, said GNS Science volcanologist Nico Fournier.

Clement said earlier the risk of both another eruption and toxic gases were simply too great on Thursday to expose recovery teams, although the situation was being constantly reviewed. 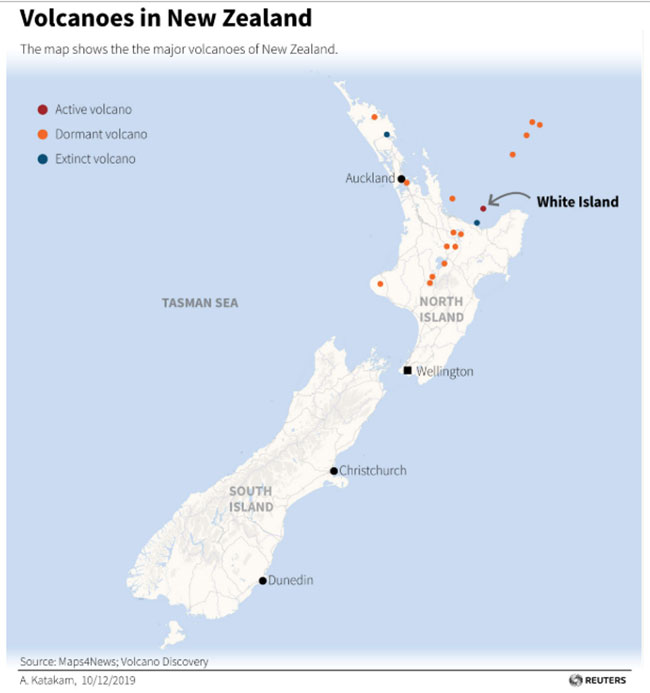 BURN INJURIES
Many of the injured are being treated for severe burns, and medical officials are importing some 1.2 million square cm (186,000 square inches) of skin. The amount of skin needed equates to about 60 donors. In New Zealand, only five to 10 people donate skin each year, the New Zealand Herald reported.

Teams of surgeons in several burns units around the country were working around the clock.

“What we faced on Monday was beyond comprehension,” Dr Heike Hundemer, clinical leader at Whakatane hospital, said at a media conference on Wednesday.

“I’ve worked in major centres in Germany as well as in New Zealand. I’ve never seen this number of critically injured patients coming into an emergency department in a short space of time,” said Hundemer.

“We used every single bedspace, every single resource we had to care for those people. Those patients we treated and comforted will forever stay in our minds.”

Australian Prime Minister Scott Morrison said 12 Australians would be taken back home for treatment. One citizen would remain in a New Zealand hospital.

Morrison said 11 Australians had died, a figure that is believed to be drawn from the 16 people officially listed dead and missing by New Zealand. Further, he said two permanent residents of Australia had died, one was missing and a fourth was hospitalised.

New Zealand Prime Minister Jacinda Ardern has said there will be an inquiry into the tragedy, which will also look more broadly at issues including access to volcanic sites across New Zealand.

Royal Caribbean cruise lines has said that passengers from its ship ‘Ovation of the Seas’ were on the island at the time. It said it grieved “this tragic loss” and would continue to offer support and services to affected families.

The ‘Ovation of the Seas’ docked in Wellington on Thursday. 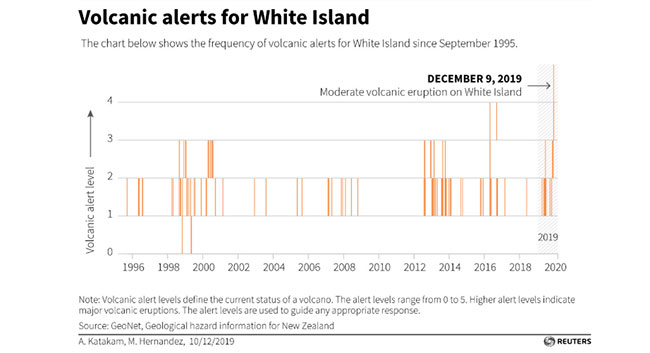