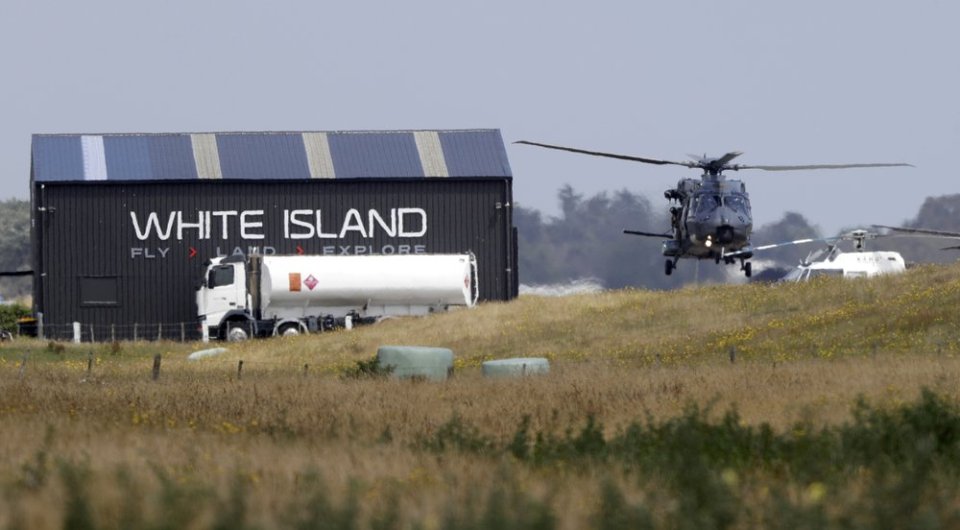 A Navy helicopter returns to Whakatane Airport following the recovery operation to return the victims of the Dec. 9 volcano eruption continues off the coast of Whakatane New Zealand, Friday, Dec. 13, 2019. A team of eight New Zealand military specialists landed on White Island early Friday to retrieve the bodies of victims after the Dec. 9 eruption. (AP Photo/Mark Baker)

The eight specialists wearing protective clothing and using breathing apparatuses landed by helicopter and found six of the bodies thought to remain on White Island since the eruption Monday. The bodies were airlifted to a ship near the island off New Zealand’s eastern coast where scientists and other police and military personnel monitored the risky operation.

Scientists have warned that gases on the island are so toxic and corrosive that a single inhalation could be fatal.

Police Deputy Commissioner Wally Haumaha said the families cheered when they were told of the successful recovery of six bodies and expressed joy and relief.

“They’ve got their loved ones coming home,” Haumaha said.

The bodies will be taken to Auckland for identification. The eight are thought to be six Australians and two New Zealanders, both tour guides.

Police said another recovery operation would be made later to recover the two bodies that couldn’t be found. They are thought to be a tour guide and the captain of a boat that had taken tourists to the island.

Police Commissioner Mike Bush said police divers would search the sea around the island and aerial surveillance would be used to try locate the two victims.

“We do believe that at least one of them is in the water and the other one we are unsure,” but the body may be in the sea as well, Bush said at a news briefing.

Conditions were good for the Friday’s recovery operation, with light winds and calm seas, and the volcano was “quiet” as the team worked, Police Deputy Commissioner Mike Clement said.

The specialists were all safe, said Police Deputy Commissioner John Tims, who is also national operations commander. He praised “their efforts and the bravery they have shown.”

Scientists have warned that White Island, the tip of a mostly undersea volcano, is “highly volatile,” and has been venting steam and mud regularly.

The unrest delayed the recovery of the last victims of Monday’s eruption, which occurred as 47 tourists and their guides were exploring the island. Many of the survivors were severely burned. Australia has returned several of its patients to burn units back home, and specialist medical teams were heading to New Zealand from Australia, Britain and the United States.

Skin banks were also sending tissue to New Zealand hospitals to use for grafts.

Authorities say 24 Australians, nine Americans, five New Zealanders, four Germans, two Britons, two Chinese and a Malaysian were on the island at the time. Many were from a Royal Caribbean cruise ship that had left Sydney two days earlier.

IN PICS: Flood wreaks havoc in Melamchi
13 hours ago